There has been a dramatic expansion in the number of organisations supporting arts activities by and for older people in the UK - but more still is needed, says David Cutler. 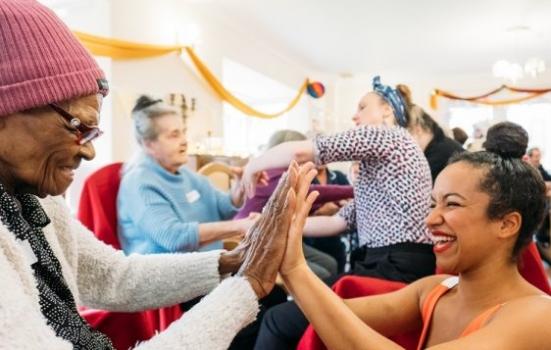 Circus arts organisation Upswing in a care home in Hull as part of Hull City of Culture 2017
Photo:

The Baring Foundation is commissioning an academic institution to consider the evidence relating to the development of arts for older people over the last decade. In advance of that, here are some impressions of my own based on my vantage point as a funder of some of this ‘creative ageing’ activity since 2010. (In her wise and lyrical report After You Are Two Kate Organ questions whether we should talk about a field of creative ageing at all, and I hope she will forgive my recklessness.)

Creative ageing is noticeable across all artforms, old and new, amateur and professional.

Although both arts and older people’s services are devolved matters and there are different laws, policies, institutions and resources in each nation of the UK, overall I would claim that the field has flourished, greatly broadening its reach. This has rarely been a matter of explicit government policy in any of the countries, but has tended to be encouraged mainly by arts funders including the national arts councils, all four of which have been energetic and influential in this area.

Although the group of established specialist arts organisations for older people hasn’t changed much – the work of Entelechy Arts, Magic Me, Equal Arts and a small number of others continues – there has been a dramatic expansion in the number of non-specialist arts organisations that now have a ready and convincing answer to how they are reaching out to engage older people creatively, especially those who find it harder to access what they have on offer.

This trend has occured despite the fact that we have been living through a period of severe constraints on public funding, including for the arts. It has probably helped that there is an increasing appreciation of the significance of our ageing society. Drivers of this include a growing understanding of the damage caused by loneliness and the potential for the arts to tackle this - plus the increasing incidence of dementia.

I wish I could be as sanguine about the importance attached to culture by older people’s organisations. But I can't - despite the very high priority placed on the arts by older people themselves, indicated by Age UK’s own research that names creative and cultural participation as the factor making the biggest single contribution to wellbeing.

There have certainly been plenty of golden exceptions, especially at the local level. Celebrating Age, our joint fund with Arts Council England, specifically tackles this, requiring partnerships between arts organisations and older people’s organisations. Similarly, there have been a number of exciting examples of good practice of engagement by non-arts institutions, as demonstated by Each breath is valuable, an evaluation of a programme for arts in care homes. Many more examples are now to be found in the Arts in Care Homes resource bank developed by the Social Care Institute for Excellence.

Even so, there is a need for a steep increase in the provision of quality arts in care homes. I am sure this situation is not helped by the crisis in social care and the struggle of providers for their very survival.

Creative ageing is noticeable across all artforms - old and new, amateur and professional. We have published several reports about digital arts and older people and one fruit of this movement will be the Armchair Gallery app for care homes, to be launched by City Arts in Nottingham, which provides virtual tours of world-class art collections to engage older people who can no longer visit them in person.

And creative ageing knows no borders: there are numerous examples of great work happening around the world in countries such as Japan, Korea, the Netherlands and Finland. For an insight, see the report Growing the creative ageing movement: international lessons for the UK by Alice Thwaite of Equal Arts, and my personal highlights in a recent blog for our own website.

The Baring Foundation will complete its programme of funding for arts by and for older people next year after ten years in the field. We are older, and we hope wiser, but certainly invigorated and inspired by a glorious decade of working with older artists.

David Cutler is Director of the Baring Foundation.
baringfoundation.org.uk/

You can find out more about the Baring Foundation’s own programme in the Towards the End report.

The arts and mental health: a vibrant field flying under the radar
Ageing artfully
Creative ageing: a flourishing field