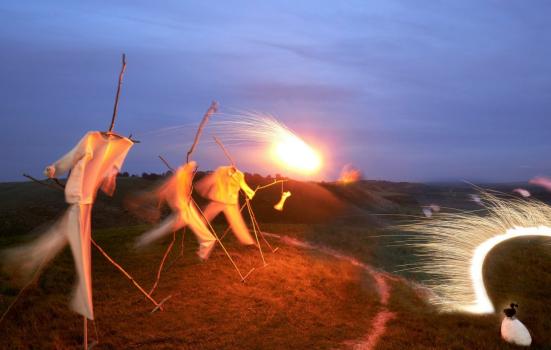 Wayfaring at Basildon Park by And now:
Photo:

It was back in 2011 when the Dorset Area of Outstanding Natural Beauty (AONB) approached Activate and asked us to be one of the arts partners on a new five-year landscape partnership that would focus on the heritage of the South Dorset Ridgeway.

Despite a little apprehension, the AONBs agreed that inviting artists into their landscape could be a way to reach a new audience and engage visitors differently

England’s AONBs are designated protected landscapes, each with a managing partnership and dedicated team working to conserve and enhance their natural beauty. In Dorset the area is almost half of the county’s countryside. The team acknowledged the artists who had defined some of the special characteristics of the landscape, such as Thomas Hardy, Jane Austin and Elizabeth Frink, and also recognised that the county is home to many contemporary artists.

The AONB team secured Heritage Lottery funding for the landscape partnership and this was the start of a much deeper relationship between us. We embarked on a new model for the Ridgeway (one of our four sites for the festival) and one that focussed on commissioning new site-responsive artworks.

One of the commissioned companies was And Now:, led by artists Mandy Dike and Ben Rigby, creators of visual performance, image and installation. Their piece ‘Barrow’ was a thought-provoking installation where audiences appreciated the time to sit and contemplate – so much so that the residents of the small village of Littlebredy near Dorchester wanted it to be left in situ permanently.

Although Activate presents large-scale outdoor performances, we do not normally have the budget to commission new, large-scale artworks. In early 2015 we met with Mandy and Ben to talk about future plans. We wanted to build on the partnership with the Dorset AONB, and Mandy and Ben wanted to continue to develop their line of enquiry into the landscape, so a lot seemed to be coming together.

We had begun a partnership with the Oerol Festival on the Frisian Island of Terschelling in the Netherlands and raised funds to take Mandy to see the type of work they present. As we developed the ideas further we found that what connected Dorset to Terschelling was an ‘ancient super highway’ called the ‘Icknield Way’.

We agreed with the Dorset AONB team that we wanted to work with other AONBs, many of which had not worked with artists in this way before. Tom Munro, the Manager of Dorset AONB introduced us to the other four AONBs that the Icknield Way traversed: Cranborne Chase, North Wessex Downs, Chilterns and the Norfolk Coast Partnership.

Tom also made the introduction to the team at the National Association of AONBs: Landscapes for Life, which has a membership of 46 AONBS covering just under one fifth of the UK. Despite a little apprehension, the AONBs agreed that inviting artists into their landscape could be a way to reach a new audience and engage visitors differently.

Alongside commissioning new work in the landscape with the AONBs, we wanted more areas to welcome the idea of working with artists – and were encouraged to find that some of the AONBs were on that journey already. The Wye Valley AONB, with its Wye Valley River Festival, was an excellent example. However, there were many more AONBs that might like to embark on working with artists but needed the tools to do so.

With a successful application to Arts Council England’s (ACE) Ambition for Excellence fund, investment from the AONBs themselves and our co-commissioning partners at Norfolk & Norwich Festival, Corn Exchange Newbury’s 101 Ourdoor Arts Creation Space and Oerol Festival, we embarked on the Life Cycles and Landscapes project and the Wayfaring commissions.

Tom Munro at Dorset AONB said: “Two wonderful pieces were created in response to the landscape, which had huge resonance to the place and a significant impact on the audience. The audience feedback confirmed the success of these works; they also led to an increasing level of trust between the supporting, managing and delivering organisations and individuals. It is through this strong partnership that the possibility for a project across several protected landscapes was conceived – and Wayfaring came into being.”

One fifth of our population lives in the 80% of England classed as rural, with an economy creating 16.5% of England’s GVA (gross value added). However, access to services are generally more challenging than urban areas. There are fewer employment opportunities and younger people tend to migrate to the cities.

Wayfaring is at Basildon Park, near Reading, from 18 to 21 July and at Maiden Castle, Dorchester between 15 and 22 September as part of Inside Out Dorset 2018.