Long van journeys into the night

Rural touring can be exhausting and unpredictable, but the key to making it a rewarding, rich experience is finding the right people to work with, says Jack McNamara. 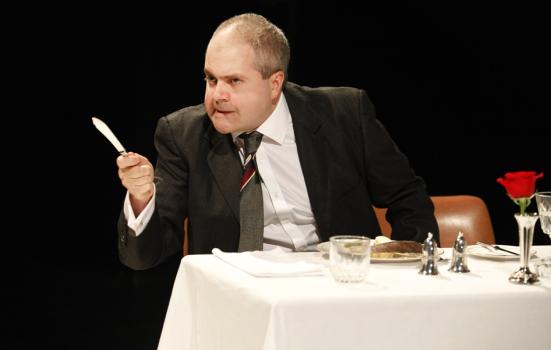 Rural touring may sound utopian, eliminating all the usual barriers to accessing high-quality art but the reality is a lot harder. Touring to rural arts venues involves designing a set that will deliver a play beautifully, but also be something that a small group can put up in a few hours and pack away in half the time.

As cast sizes tend to be smaller and audiences closer to the action, there is a level of scrutiny in rural theatre that demands a high level of performer

It involves finding actors who can deliver complex and demanding performances and also be willing to effectively pack up and unpack a small house between long van journeys into the night. And that is when things go smoothly.

Part and parcel of being a rural touring company like New Perspectives is to be confronted with a range of challenges that no amount of planning could truly prepare you for. Winding staircases to travel heavy equipment up, immovable objects in the playing area or large windows that spill daylight all over your detailed lighting designs.

Yet even if these challenges occasionally stretch the goodwill of a tired touring company, it is exactly the idiosyncrasy of the different spaces that makes rural touring so meaningful. We are not here to neutralise a space to serve our production. Instead, our productions have to fit into the existing life and character of a lived-in environment.

And while the task of negotiating a lighting pole up a narrow staircase might appear thankless at the time, the pay-off is a production that is stunningly reframed in a different context from one night to the next. From community halls to churches, these are strong spaces that set their own demands, not only on the design but also on the dramaturgy.

When I meet the company at a new venue on tour my usual greeting is “I have to enter from right rather than left now” or “The ceiling’s too low to stand on the table so we’re going to play that scene on the floor.” The actors on a rural tour come to own the production in a way they would rarely come close to in a normal theatre context.

The busier they are behind the scenes, the more important the creative pay-off of being on-stage. We deliberately programme shows that give everybody on stage a lot to do, so that the balance of a true ensemble is there from the off.

Given that we can sometimes be one of only a handful of theatre events in a village that year, each show is an opportunity to be a real advocate. While we do this through the ambitious shows we programme and the level of our design, our main way of achieving this is through our casting.

I was once told that great actors and rural touring were mutually exclusive, but I have found this to be far from true. As cast sizes tend to be smaller and audiences closer to the action, there is a level of scrutiny in rural theatre that demands a high level of performer. For all the actors who focus their careers on major cities, there are just as many who make choices based on the richness of the material and the politics of making art that transcends social barriers.

Our 2014 production of The Lovesong of Alfred J Hitchcock required a marathon central performance from actor Martin Miller. It was pleasing to know that his performance, which was singled out by critics in New York when the show transferred off Broadway, had been delivered with just as much gusto and precision in villages across the Midlands.

The promoters who run these events have a much deeper level of investment than you would likely find as a visiting company to a theatre. No dutiful greetings from staff teams here. The promoter meets the company, feeds them, arranges the space, runs the bar, manages the box office, markets the show, fundraises for the hall, collects feedback, tidies up and sees the company out.

On one night these individuals will perform the gamut of duties usually distributed between multiple departments in a theatre, and all on a voluntary basis. The company are in the hands of people who care, and the pressure for the event to go well can feel stronger than on any press night. In a village hall there is no long wait for reviews, and the immediacy of people’s responses can be startling. On one occasion an enthusiastic promoter leapt up as the cast took their bows and proceeded to discuss with the audience why the opening scene felt slow.

This is a far cry from polite opening nights where everyone praises a show before the critical verdicts come in. And yet it is honest and as live as the work itself. When a performance is well received you feel it palpably in the air and your reviews come thick and fast as soon as people leave their seats. Success is not just in the execution of the art or sales at the door, but in reaching a sense of occasion that pays off the personal investment of everyone involved.

An experiment in openness
Long van journeys into the night