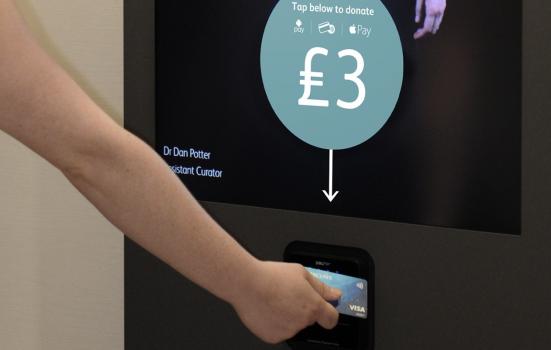 The Digital Media team at National Museums Scotland has been thinking about visitor donations for quite a while. Way back in 2015 we walked past the Cancer Research shop on Kensington High Street featuring their ‘Tap to Donate’ campaign. A screen displayed a scientist at work and you could donate from outside the shop with simple tap of your card on a contactless terminal. It seemed like a really innovative use of tech allowing you to do something in the simplest way possible, even when the shop itself was closed.

This is perhaps why I’m drawn to Contactless payments. Not being a very patient person I like things that speed up the mundane processes of modern life, whether paying for my lunch or progressing on my journey.

Over the past few years, Contactless has seen huge growth in everyday usage and is becoming accepted as a way to conduct small everyday transactions (I’m now surprised when shops don’t have a contactless option and suddenly chip and pin seems a bit cumbersome).

With the average contactless transaction around £9.00, two in ten card payments in the UK are now made via contactless and the last year has seen a 21% rise in the number of contactless cards in circulation (both debit and credit cards) and a 165% increase in total spend.

In theory, contactless payments make perfect sense for facilitating the types of low-value, high-frequency transactions traditionally sought via donation buckets or boxes. People are also carrying a lot less loose change, which is often the excuse used to avoid donation buckets on the street. Having said this, I think tourists still prefer to pay for things in cash to avoid card transaction charges.

Despite the ease of contactless payments, the act of donating is a different type of transaction compared to the retail environment. Here the payment process is an integral part of the transaction where you receive a direct benefit as a result (receiving a coffee or accessing a station platform for example). In contrast, with donations there’s much more emphasis on the giver to voluntarily take action.

There are numerous examples of charities, and some cultural organisations, trialing contactless giving (see the growing list below) but I’m not sure the tech has yet become accepted or ‘normalised’ in these environments.

The novelty factor of finding a different way to donate is always a great incentive, but I think there’s still an important difference between the physicality of dropping coins into a donation box compared to just an instant tap and beep. It can seem strange that something so friction-less can facilitate a transaction which can be both meaningful and emotional for the giver.

However, as our Head of Development Margaret Clift McNulty pointed out at the start of our project, museums could offer the perfect environment for contactless technology and our aim was to create a donation mechanism integrated into the visitor experience which is already very visual and interactive.

Who is using contactless donations?

A range of organisations have experimented with some form of contactless donations over the last year or so. Here are just a few examples that caught my eye:

Our own explorations of contactless giving started off with a workshop at digital agency Earnest. Their ‘innovation lab’ had previously worked with Mary’s Meals to enable lunch-goers to make a small (30p) donation to the charity via transportable ‘lunchbox’ contactless terminals.

This gave us lots of ideas about the types of experience we could create for different spaces and audiences — from visitors choosing their favourite museum object by tapping to vote, to more traditional fundraising totalisers supporting a public appeal. We were also given some great pointers on the tech set-up used by Mary’s Meals and started investigating how to get set up with the terminal provider, Payter.

James Hairsnape, formerly of the Barbican Centre, was kind enough to take the time to meet us and provide invaluable background information about the somewhat arduous set-up process.

We had a small budget (>£5k) to work with an agency to design an attractive and simple user experience around the core action of tapping to donate. The project tender was won by Wiedemann Lampe and we quickly came up with some guiding principles for the project:

Attract attention: We instinctively felt that a stand-alone box wouldn’t be enough to attract people over or convey an emotive enough ask. Something other than the box itself had to draw visitors in.

Be as friction-less as possible: We wanted to make donating as easy as dropping a coin in a bucket and keep the ‘one-tap-and-your-done’ philosophy that makes contactless so great to begin with. This meant discarding any thoughts of capturing visitor data or asking for user generated content.

Create a natural ask: Placing the terminal outside a forthcoming exhibition on Ancient Egypt immediately made sense as it was predicted to be popular and had free entry, providing a natural moment in the visitor experience to ask for donations. This also meant designing something for adult visitors in the first instance as this was the target audience for the exhibition.

Provide an experience: Rather than an isolated tap and beep, we felt that the museum space offered the opportunity to integrate the act of giving into the visitor experience, providing something both visual and interactive. Our aim was to create the digital equivalent of a simple coin spinner, where your donation is rewarded with a short but satisfying experience — and one that you (or your child) will want to repeat.

The final experience shows a video of the lead curator of The Tomb exhibition, Dr Margaret Maitland, and then her colleague, Assistant Curator Dr Daniel Potter, on a portrait-oriented 42” screen. They stand looking out at visitors, making eye contact, carrying objects across the frame and waving or beckoning to attract people over to the kiosk. 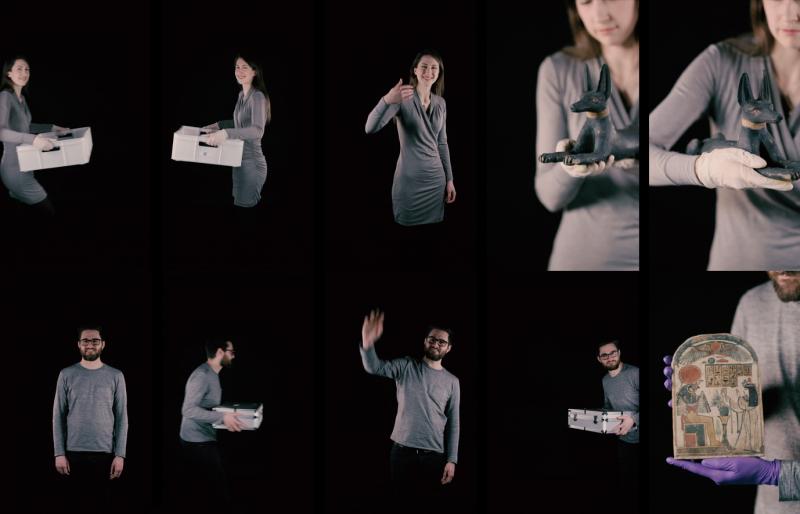 We shot this very simply against a black backdrop, in portrait mode and in 4K so we could crop into the frame. It’s pretty hard to get people to simply stand or walk naturally but both Dan and Margaret were really great at trying things out and taking instructions, like: “Be more normal!”

Donations have been set at £3 initially and there’s some short call-out text overlaid on the video screens, as well as some Egyptian-themed graphics and a big blue call-to-action button making it as clear as possible what to do. On tapping your card or phone on the terminal a thank you message appears, before your chosen curator reveals their favourite object from the exhibition in close-up detail.

Because card payments are processed so quickly and signalled with just a single ‘beep’, we ended up adding some friction back into the process. A rotating ‘processing payment’ stage was added into the flow, making it seem like something more definite was going on behind the scenes. There’s also a totaliser screen that can tot up total donations made against a set target, although we decided to exclude this from this initial test as we were asking for general contributions rather than running a fundraising campaign.

Running the system behind the scenes is a really neat self-contained content management system (CMS). Sitting on a mini PC housed in the kiosk, the system talks to the terminal and changes the video display on the point of recognising an approved donation.

In essence, this means that we have a very flexible system that we can change and re-purpose with minimal effort and, importantly, at minimal cost. For example, any of the text displayed can be edited on the CMS, the totaliser amount can be changed and the video files can be swapped out for a completely new look and feel. We can also download software updates, stop and re-start the application and change the fixed donation amount.

Purchasing a simple wireless keyboard has allowed us to access the mini-PC within the housing without having to remove covers or shut everything down – a small thing but it’s proved invaluable to make quick changes.

It’s still early days in our trial but after being live for about four weeks, we’ve had some really great feedback on the kiosk. Donations are ticking over at between one and eight per day, which is probably equivalent to the coin-drop donation box also positioned at the end of The Tomb exhibition. I also don’t think the contactless terminal is competing too much with the coin donation box, but is instead attracting additional donations.

Here are some of the things we’ve learned through the whole process and after being live for a month:

We’re hoping to experiment a little with different donation amounts and have already changed some of the key messaging on the attractor screen. As mentioned above, there’s a general feeling we’re currently missing an opportunity to engage with people in the right frame of mind, make the ask more integrated into the visitor experience or simply place the kiosk in an area with much higher footfall.

This article was originally published on the National Museums Scotland blog.

National Museums Scotland is exploring ways to share the set-up with other cultural organisations wanting to create similar contactless payment experiences. Get in touch if you want to find out more.

You can read more detailed information about the project on Medium and see the contactless kiosk for yourself at ‘The Tomb’ exhibition at the National Museum of Scotland.