Young people in remote parts of Scotland have gained the skills to organise rural tours in a project designed to generate a new breed of arts promoters. Jo McLean describes their experience. 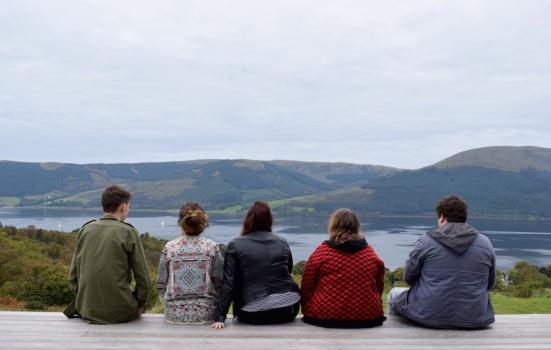 GET IN is a year-long training programme for young people aged between 16 and 26 in the Highlands and Islands of Scotland. It offers the training, knowledge and expertise required to programme the live events they want to see in their own communities.

Designed by the Touring Network in response to a number of issues affecting rural touring, it aims to generate a new breed of arts promoter in the region.

Adopting the many faceted role of a local community promoter meant being confident managing a budget, liaising with artists, developing a marketing strategy and learning the dark art of programming

Our vision is that every community, no matter how small, has an essential and vibrant cultural life. We support this vision through a membership model that provides support, networking opportunities, training and pockets of financial support to volunteer promoters across half the land mass of Scotland.

Succession planning is becoming a real issue for many of our promoters, as community activities often fall to the same few individuals, with a real lack of younger people stepping up to be involved, or indeed attending events. If you add into that mix patterns of migration away from the islands and more remote areas of the highlands, a lack of direct services, poor digital infrastructure and the geographic challenges of working and studying in this part of Scotland, you begin to see a much bigger picture.

In 2011/12 we consulted with young people and organisations that provide services for young people, to understand the views of the younger communities and find out whether they were interested in arts activities geared towards them.

We found there to be an active interest, but lots of barriers (perceived and actual) which were affecting how young people get involved. One of these barriers was a lack of non-formal training for arts-related learning. So in understanding the regional issues and identifying barriers for young people, as well as the needs of the network, we devised GET IN.

The initiative was originally designed for 20 young people each year, but it soon became clear that ten participants was a much more realistic number, due to the time and resources required to coordinate, motivate and support a dispersed team of participants.

We began the recruitment process by asking our promoters to put forward young people in their communities who might like to get involved, resulting in three successful applicants. We also offered the opportunity more widely through regional youth arts hubs, youth clubs and organisations providing youth activity (not necessarily arts-based) which were where the remaining participants came from.

Gaining skills, knowledge and experience were the primary reasons for young people wanting to take part in the programme, with an interest in bringing high-quality performance to their relevant communities a high second.

We made the slightly challenging decision that, to respond to the needs of the participants, the programme should be developed initially in outline only and more fully as it was delivered. This was in part due to the timescales in realising funding, but also because we wanted to ensure everyone was participating fully and taking ownership of what they were learning.

The culmination of the project involved participants programming a tour of an artist of their choice in March. Adopting the many-faceted role of a local community promoter meant being confident managing a budget, liaising with artists, developing a marketing strategy and learning the dark art of programming – starting to understand what audiences want to come and see.

Working as a team and coming to a group consensus about what to tour was not too difficult and the youth promoters were fortunate enough to attract award-winning Scottish artist Kathryn Joseph. She performed an eight-date tour that started in Boat of Garten in the Cairngorms National Park and culminated with an intimate performance in Bruichladdich Community Hall on the Island of Islay.

The beautiful locations were part of the attraction for the talented musician, who is from rural Scotland herself, and understands the need for high-quality live performances away from the main stages of central Scotland.

We are now in year two of the project, and have made some changes to how the programme is delivered, based on our experiences. We also have an on-board evaluator from Queen Margaret University in Edinburgh who is helping us assess how to move the programme forwards.

Future aims are to get the programme accredited and look at how we can sustain it without relying too heavily on public funding. We have some exciting ideas about how we can do this as the skills acquired during this process are considerable and, as ever, highly transferable.

Some of the anecdotal evidence to date, other than the enthusiasm from the young people involved, has been from our more established promoters who are delighted to see such committed young people re-energising the network.

Not all these young people will stay in the network or indeed in the Highlands in the long term, but we are encouraging them to develop larger networks of young people to assist them – and while they are here we will continue to support them to promote live events.

Jo McLean is CEO of the Touring Network.
www.thetouringnetwork.com

GET IN is funded by Creative Scotland, Young Start, the Robertson Trust and Gannochy Trust.

Why I'm writing myself out of my job
Succession planning