A week-long arts residency involving young NEETs was a far cry from some ‘old skool’ outreach projects. Ammo Talwar reveals what was needed to re-engage with them ‘street-style’. 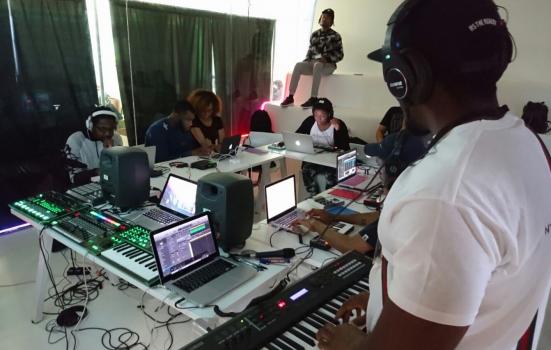 Residency programmes, talent development and boot camps can have a profound effect on artists and participants alike, by bringing them together for extended periods. We explored this process last year when my company Punch was tasked with rebooting Gallery 37, Birmingham’s flagship youth participation programme.

Gallery 37, which set the blueprint for the massive modern youth arts project, was created in Chicago in 1991 when the city’s own version of the then-troubled Times Square was Block 37. The arts-based youth training programme transformed it into a summer playground for apprentice artists. After its initial success, Gallery 37 became part of a year-long, multi-agency, arts-based response to youth unemployment.

Chicago’s success inspired worldwide imitation, and Birmingham’s Gallery 37 was one of the first. Running from 1998 to 2012, the venue was an unremarkable shanty of white marquees outside the International Convention Centre. It quickly became a summertime fixture, with the happy participation of thousands of young people and artists. At its peak in 2004, it employed 40 artists, 40 ‘shadow’ artists and 20 events officers in-season, with a team of arts-admin types working year-round to pull it off.

Through Gallery 37 we wanted to test how relevant arts residencies might be to today’s ‘NEETs’ – young people not in education, employment or training.

We made sure every participant, artist and partner had fast, free access to wifi to solicit an explosion of social media posting and file sharing. The best was reposted on screens around the campus, contributing to a heightened sense of immersion. Participants managed a reach of 53k on Facebook, and 160k on Twitter by using pre-agreed hashtags. And this was all about art.

We had 204 eligible applicants for 60 heavily screened places in the week-long residency, which culminated in a day of public showcase performances. Our theme was DIY (do it yourself with others). The showcase day provided a sense of purpose and closure to the week, encouraging participants to come early and stay late to hone and refine their work.

Courses included visual arts, film, crafts, music and spoken word. We were able to field an additional team of 20 event volunteers from our applicants, all of whom fulfilled our participation criteria. Some of those documented the week, livestreaming to Facebook. We had a drone camera which flitted around the building’s vast atrium, filming in unexpected ways.

What were the outputs and outcomes? The dropout rate was 2%, with an audience of over 2,500 people on the showcase day. All our young artists performed or participated – aside from one injured young dancer. We were later able to source another £20k of investment for a micro-commissioning scheme open to every participant who took and passed an Arts Award as part of Gallery 37.

This is currently ongoing, and we have commissioned more than 20 artists to help set up new businesses and get them on the road to creativity. Others artists have gone on to our current schemes, including our Desi Moves South Asian arts project, and our national music tour, Welcome to my City.

The best youth engagement (we prefer the term ‘talent schemes’) work is always at street level. The recruitment success was down to a months-long commitment from my team to attend community events and put on pop-up workshops, sometimes in the digital space. Walking into a youth centre keeps you grounded as a person and as a professional.

Where residency schemes can really reward an organisation is in more effective engagement afterwards. When programme graduates become community advocates they can help an organisation ‘prove in’ with their peers in a way that is authentic and organic. We never wanted to reach out like some ‘old skool’ outreach projects – we needed to re-engage ‘street-style’.

The good news is that right now it feels like there’s more funding around to get artists working in the community. The bad news is that there's a big difference between funding and investment. Unimaginative corporate objectives reveal that some funders still see arts schemes as a vehicle to keep young people, NEETs and others, busy and out of trouble. That won’t make them fully engaged and ready to move on up to mainstream arts development programmes.

Arts residencies give organisations time and space to spot artists with originality and drive while they are still ‘hood superstars’. They can then be guided up the career ladder via other artist training programmes. But increasingly it seems a few rungs have been removed from this ladder.

The recent ‘boatgate’ revelations at the Tate highlighted the growing use of zero-hours contracts for front-of-house teams in too-big-to-fail organisations. This creates a classic glass ceiling. If visitor assistants and others, many of whom are enthusiastic amateur artists, can never reach a position where they can earn a livelihood or get their voices heard in the mainstream, why are we engaging them in the first place?