A series of portrait-painting events exploring and celebrating diversity engaged both live and online audiences. Mandy Fowler explains how people from all around the world got involved. 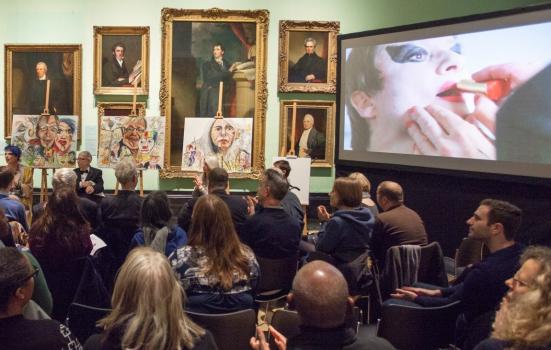 The Portraits Untold project last summer and autumn involved the creation of individual portraits of four diverse high-profile figures from the cultural world, while exploring their life, creativity and diversity through conversations in front of an audience and through live streaming.

The sitters had a connection to the venue and city of their sitting and were asked to take part as they had been the ‘first to do something’. They each had a commitment within their work to representing and presenting diversity, a theme that resonated with the disabled artist Tanya Raabe-Webber. They provided a fascinating look at the differences and similarities between people’s experience of the world around us, which formed the basis for the conversations during the sittings.

Tanya says: “As a disabled artist, the notion of my own diversity drives my interest in people and the exploration of the human condition and the belief that everyone has the potential to be creative if given the opportunity. I wanted to develop a way to engage audiences more fully in the subject matter of my work and also within its physicality.”

Tanya undertook the live portrait sittings, fusing digital and traditional drawing and painting techniques in an interactive live environment. Both the physical and online audiences were invited to participate in the event and join in the conversations by sending questions and comments through social media that appeared on a screen.

They also developed their own creative responses in the form of drawings, both on paper and through digital drawing apps on their smartphones and tablets. Tanya incorporated the public’s drawings into her final portrait of each sitter through the projection of their drawings on to her canvas.

We were driven by a belief that we were making the project as accessible as possible on every level, from physical access within the live sitting itself to people being able to take part through the use of BSL interpretation, live captioning and the live stream.

The project had a high level of support from the teams at the venues, who worked hard to solve issues such as internet access and conservation aspects regarding creating a portrait in a museum and gallery setting.

The project also developed an approach to digitally engaging audiences through early-stage research into accessible digital technology with Chris Creed, an academic researcher in human-computer interaction. The testing of the digital technology and fusing it with traditional practice took place with cultural consultant Lara Ratnaraja and Hatch & Twine, the technology company responsible for the livestream.

A test event, with students and others from within the project partner’s networks acting as both a physical and online audience, took place in Birmingham. As the technological aspects of the live event delivery were so complicated, this test environment was crucial. It allowed the project partners to come together to solve challenging problems and gather audience feedback before embarking on the live events.

The project also benefited from a partnership with The Big Draw, which was interested in the fusing of digital drawing with traditional methods and the inclusive nature of audiences participating both online and as a physical activity. The Big Draw has since invited Tanya to become an ambassador.

The project reached large audiences both at the venues and through the use of live stream, and developed new audiences for each of the venues. It culminated with a public unveiling event of the final four portraits and discussion between the four sitters and the artist at the National Portrait Gallery.

Discussions are now taking place with partners and funders for a second incarnation with new venues and sitters, and with Tanya in residence at the venues in the run-up to each live sitting to work with audiences through workshops and masterclasses.