Turning the city of Belfast into a gallery has captured residents’ imaginations and changed the way they view their home. 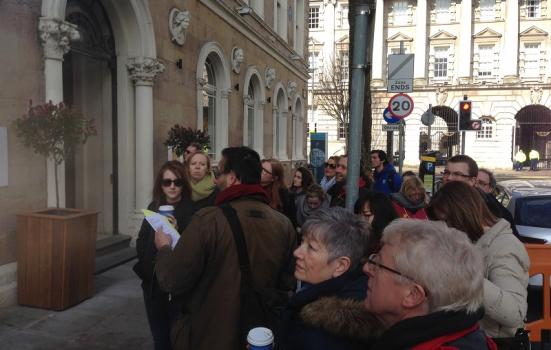 The City as a Gallery initiative was a visual arts collaboration earlier this year between Belfast City Council and PLACE NI. It used workshops, walking tours, exhibitions and more to examine how residents and visitors feel about visual arts and to explore how best they could be used to shape and enhance urban spaces.

Eimear Henry, Assistant Manager at the council’s Tourism, Culture and Arts Unit, explains: “Belfast has undergone tremendous change in the last two decades. Investment and regeneration, particularly in the city centre, has created a young and vibrant European city which appeals to visitors, investors and students.”

“Visual arts play a key role in how our city is perceived, both by those visiting for the first time and by those who know Belfast inside out”

“Visual arts play a key role in how our city is perceived, both by those visiting for the first time and by those who know Belfast inside out. As the city grows and changes, we wanted to ask people how they thought art could be used more effectively to make better use of the spaces we have.

“We also wanted to tap into the talent within our local arts and cultural sector and give artists the opportunity to show how their skills could be used to engage more people in visual arts, while also enabling people to see the city in a new light.”

Over 20 arts and community organisations took up the offer, devising a programme of free events which focused on Belfast’s east–west axis and highlighted everything from iconic public art pieces to hidden gems that are a little harder to find. The majority of events were interactive, inviting participants to talk about and explore everyday art in new and innovative ways.

Desire Line at the Golden Thread Gallery offered a ‘Room of Wonder’ containing a sculptural interpretation of the route from east to west Belfast. Visitors were invited to walk under, over and through the sculpture which was inspired by author Italio Calvino and his Invisible Cities concept of a human imagination not limited by the laws of physics or modern urban theory.

Belfast’s famous black taxis were transformed into mobile screening rooms showcasing the work of local contemporary artists, which put art at the centre of everyday journeys to work or home.

A walking tour of the unique ’heads’ found hidden within the architecture of Belfast city centre, led by artist Daniel Jewesbury, culminated in the return of a carved head that had languished in storage for 30 years and has now been returned to its original location, McCausland’s Warehouse (now Malmaison Hotel).

Shopping centres and high street stores got in on the act too. In east Belfast, a part of the city that is undergoing major regeneration work to reconnect its three rivers, shoppers at Connswater were invited to join artists in creating a large collage combining art, literature and photography and exploring themes of resilience, hopes, dreams, fears and learning.

At CastleCourt shopping centre, over 600 curious onlookers popped into the Office of Important Art to view archive film footage, photographs and artworks which charted Belfast’s development over recent years. Images from local photography magazine ‘Source’ were selected by a team of editors, artists and designers, in collaboration with members of the public, and exhibited in shop windows along High Street to showcase different sides of the city.

For Imagined City, 60 guests boarded a special bus tour to view four imaginary public artworks commissioned and ‘installed’ at sites across east and west Belfast. They listened to audio recordings from the artists describing their works as they passed by the sites chosen for them.

One participant described the tour as “fun and informative... a completely different way to go about thinking and experiencing the city”.

Imagination was also required for the ‘Trailers’ public art showcase, a cross-community programme to transform an interface site between the Falls and Shankill Roads into a living artwork complete with mobile cinema, printmaking sessions and other arts activities involving 370 young people.

All the City as a Gallery experiences invited participants to share their views afterwards using special feedback ‘coasters’. The council’s social media channels also asked people to pick their favourite piece of public art and explain why, so the conversation could continue after events had finished.

The reaction has been very positive and it appears to have captured people’s imaginations in terms of how they view the city, and the spaces that exist within it, as well as what’s possible in those spaces when you add a little bit of creativity and vision.

We are taking all the feedback on board and hope to run something similar again in the autumn. Plans are coming together for a walking tour of Belfast’s visual arts scene, covering everything from public art and street murals to historic carvings and unique shop signs, which people can then download and explore at their own leisure.

Through this initiative we have been able to open up Belfast and increase the visibility and accessibility of visual arts to all those interested in shaping the city for the future.