Connecting to the past

Hastings is at long last celebrating its place in history with a festival of contemporary arts. Polly Gifford tells all. 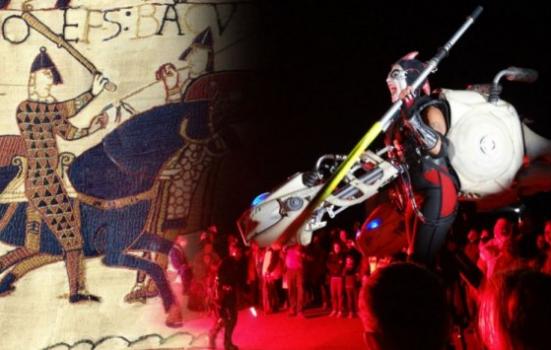 The Bayeux Tapestry and Pi Leau by Close Act

Hastings’ relationship with the history and heritage of 1066 isn’t always clear. If you visit there isn’t much prominence given to the town’s role in Anglo-Norman history. Hastings Castle may be the first Norman castle in England but there is little left of it, and what remains is sorely in need of development as a visitor attraction.

Even Hastings Museum doesn’t have much in its collection to illuminate and capitalise on this historic moment. And yet 1066 is what makes Hastings famous throughout the world. With 2016 marking the 950th anniversary of the battle, it was time for a new approach.

Participation and engagement are essential, both from an artistic perspective and because the benefits of regeneration are not being evenly felt

The reputation of Hastings has changed over the past ten years from headlines about the Costa del Dole to the Shoreditch of the south coast. The town has a growing identity as a cultural hot spot with a large and active community of artists, increasingly swelled by economic migrants from London and Brighton.

There is also an eclectic programme of arts and culture including a huge number of festivals, from the community-led celebrations of Jack in the Green and Bonfire Procession to the Coastal Currents Arts Festival and Fat Tuesday Mardi Gras. Into this fertile mix have come high-profile cultural developments such as the Jerwood Gallery, the Source underground BMX park in January this year, and in May the reopening of Hastings Pier.

Like many seaside towns, culture is becoming a key driver of regeneration in Hastings, following years of decline instigated by the collapse of the traditional seaside holiday. This is recognised and supported by the local authority and many other partners.

This is closely linked to placemaking and the town is becoming increasingly ambitious in its use of cultural activity to redefine its identity. As a result, and in the face of austerity and budget cuts, Hastings Borough Council decided to use the opportunity offered by the anniversary to connect our famous past with the energy and momentum of the present. A major festival of contemporary arts will offer new perspectives on the history and legacy of 1066.

The ROOT 1066 International Festival is inspired by the idea that many aspects of modern English culture have their root in the Norman Conquest, the impact of which can be seen today in many ways.

The festival aims to be both outwardly facing, boosting the profile of the area as a place for world-class contemporary arts, and also to engage with and involve the local community in articulating their part in the ongoing story.

We are inviting artists to the area, including Wildworks Theatre Company, who will create a site-specific installation near the ruins of Hastings Castle, and light artist Chris Levine, who is installing an array of lasers on the end of Hastings Pier. We are also working with local partners including the Jerwood Gallery and De La Warr Pavilion to present major exhibitions that showcase the venues and year-round arts offer we have.

Participation and engagement are essential, both from an artistic perspective and because the benefits of regeneration are not being evenly felt. From recent government statistics, Hastings is still the most deprived town in the south east of England, with some wards in the worst 0.5% nationally.

The anniversary gives the opportunity to reach out beyond existing arts audiences. Examples include a new community opera presented by Battle Festival working with Glyndebourne and the De La Warr Pavilion and a chorus of over 250 local singers, and a diary project inspired by the Mass Observation Archive called ‘Hastings speaks: A day in the life of a town’, to which over 800 local people have contributed already.

These projects put the local community at the forefront of the festival, foster a sense of pride and build stronger connections to both the past and the present.

However, the activity in 2016 isn’t in itself enough. ROOT 1066 needs to leave a legacy beyond profile-raising and engagement. Hastings has just adopted a new culture-led regeneration strategy that will frame this work into the future. Conversations are happening around how to articulate our 1066 legacy through themes of invasion, migration and identity that have a contemporary resonance, linked to the development of Hastings Castle and Museum.

The partnership-working stimulated by ROOT 1066 will continue both at a strategic and delivery level, putting culture and arts at the heart of growth, inclusion and placemaking, and ensuring Hastings remains famous for what’s happening in the present as well as the past.

Creating coastal communities
Connecting to the past