Opera North’s singing programmes were recently praised for greatly improving the SATs results at two primary schools. But was it really the opera that did it, asks Jacqui Cameron. 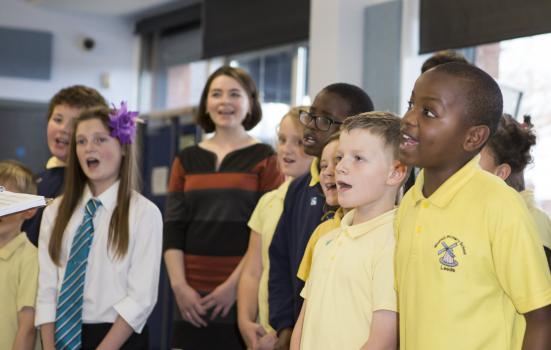 A singing masterclass with the Chorus of Opera North
Photo:

Towards the end of September Opera North shared the news that two primary schools in Yorkshire, where we deliver intensive music programmes as part of our extensive education work, were celebrating a dramatic increase in academic achievement. Windmill Primary School in Belle Isle, Leeds and Bude Park Primary School in Hull are located in deprived communities, but both schools had seen significant rises of up to 20% in their KS2 SATs results.

This news sparked immediate public interest. Articles appeared in various newspapers, the headteacher of Windmill Primary School was interviewed on local radio and congratulations echoed on twitter feeds. A BBC Look North film broadcast about In Harmony Opera North was embedded on its Facebook page and within a week received over one million views and was shared over 11,000 times. The attached comments overwhelmingly cried out for the government to value arts education and to fully understand the wider benefits that an arts education can bring. There can be no doubt that this is a subject about which people care.

He described a boy who used to throw furniture when he got frustrated, now finding solace in his violin

I care too, but on hearing about the staggering rise in academic achievements in both schools, my mind immediately asked why. Was it definitely the music programmes that had brought about change, and if it was, how do we prove it? And if music is the catalyst, what are the key ingredients that are making the difference?

In Harmony Opera North, funded by Arts Council England and the Department for Education, began in Windmill Primary School in January 2013. Every child in the school participates in up to three hours of musical activity per week during curriculum time and many children attend further after-school sessions three times a week. Most of the 360 pupils at the school play a string instrument and enjoy weekly group instrumental lessons and orchestra sessions, and everyone sings in an age-banded choir. The children enjoy giving regular performances to family and friends and they have all had the opportunity to perform at several events with the Orchestra and Chorus of Opera North – initiatives which incidentally helped parental engagement with the school rise from 7% to 39% in 2013. The school’s results this summer in Key Stage 2 SATs exams (taken by 10 and 11 year olds) increased the percentage of children attaining a Level 4 in reading from 78% in 2014 to 98.7% in 2015. In writing, 86.7% achieved Level 4 or above, up from 75.6%, while the results in maths increased from 73.2% to 93.3% of children attaining Level 4 or above.

Our sister project, Opera North Singing School, is based in Bude Park Primary School in Bransholme, Hull. Since September last year children at the school have received up to three hours a week of singing and performing arts sessions related to opera and have had regular performance opportunities, some with members of the Orchestra and Chorus of Opera North. After this first year of delivery, the school’s Key Stage 2 SATs results have increased the percentage of children attaining a Level 4 in reading from 80% in 2014 to 96% in 2015. Lower down the school in Key Stage 1, the school’s SATs results have increased from 81% in maths in 2014 to 96% in 2015.

The In Harmony programme is being externally evaluated, and we are doing the Hull programme internally by ourselves. However, it is becoming clear that more research is needed in order to establish which ingredients in these programmes are crucial to their impact, as we strive to create a delivery model for the future which is both successful and sustainable in financially challenging times. Aside from the strong leadership in evidence at both schools, from headteachers who believe in the wider benefits that a good music education can deliver, key ingredients which warrant further analysis include:

While we can’t claim that Opera North or the music programmes are solely responsible for the dramatic rise in academic attainment, the headteacher of Windmill Primary School is convinced that the programme in place at his school is a major factor. While chatting with him last week, he told me how the learning environment in his school had changed. He described how children, previously labelled as suffering from ADHD, used to find sitting still in the classroom difficult, and now those children are able to focus and concentrate in lessons. He described a boy who used to throw furniture when he got frustrated, now finding solace in his violin. Concentration, motivation, confidence, self-esteem, self-discipline – it is these skills which the headteacher feels have transferred to his classrooms, enabling his teachers, ultimately, to teach.