Has East Sussex County Council achieved the unachievable? Sally Staples reveals how, through a social capital study of De La Warr Pavilion, it unearthed a way to describe the intangible value culture. 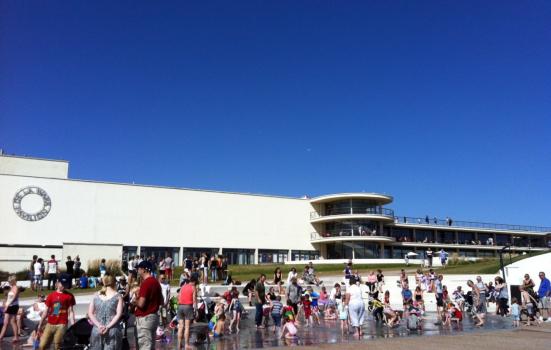 In 2011 when East Sussex County Council made the decision to reinvest in a cultural strategy (which included recruiting me to develop it) it was going against the tide. All around local authorities were reducing cultural services or getting out of the business altogether. So I was surprised to discover that despite this bold commitment there was a limited understanding of the cultural sector and its untapped potential. I found myself welcomed but quickly assigned to the margins, the strongest indication of this being when I was told that there would be no need to take the new cultural strategy through the political ratification process. But there was every need as I was greedy for any opportunity to stimulate not just discussion but informed and disruptive debate. While I fully accepted that defending the sector’s worth in economic terms would be necessary, I wanted to balance this with a line of enquiry which would reveal and articulate that illusive intrinsic value of culture we all experience but are rarely encouraged to demonstrate.

Looking back we smile wryly at how naïve we were, as what we didn’t realise then was that social capital has no formally adopted universal definition

I approached Stewart Drew, Director of the De La Warr Pavilion in Bexhill on Sea, and in a meeting of minds we decided to commission a study of how the pavilion generated social capital and what we could learn from that. Along with the Director of External Relations Sally Ann Lycett, we set about writing a brief and finding the right consultants to work with us.

Why the De La Warr Pavilion? East Sussex has a wealth of significant cultural venues from RIBA award-winning galleries Jerwood and Towner and the magnificent Glyndebourne, to rural idylls such as Charleston and Batemans. What drew me to the pavilion was that when it was first commissioned by Earl De La Warr back in the 1930s his vision was to build a seafront people’s palace. Today when you visit the iconic modernist building you will encounter people browsing through the galleries, buying tickets for a show or bringing their children to events, but you will also find them setting up their laptops to work in the café or simply sitting and pondering the seascape, reading the paper or meeting friends. On sunny days barefoot children run through reception leaving a trail of sand and a sense of being at home (which makes me feel rather wonderfully out of place).

We wanted to see if we could measure these interactions and test whether the organisation was succeeding in making everyone feel welcome. Were all these visits of equal value, and if so, was the organisation being run in a way that reflected this?

Looking back we smile wryly at how naïve we were, as what we didn’t realise then was that social capital has no formally adopted universal definition. Nor is there a unit of social capital, which makes measuring it quite tricky. Consultants at Nick Ewbank Associates were undaunted by these obstacles and positively relished the challenge. So we all embarked on the journey with no real idea of where it was going to take us or what it would achieve. Fortunately the effort was worth it. At its simplest the study reminded us all that relationships matter. Stewart and Sally say that taking time to view the organisation as a series of interconnected relationships unlocked for them an insight, a compass point from which they make all significant decisions about how they run the building now.

NEA used a ‘design charette’, observational diaries and interviews and matched that against academic theory using diagrams of networks and patterns to describe the value of the true organisation – not the building, not the programme, but the people that bring the De La War Pavilion to life. To see how these relationships are strongest when they are evenly spread and are all given equal weight was the turning point of the process. Stewart attributes the additional 18,000 tickets sold in the year following, the doubling of profits in the café and the seven-year funding commitment from Rother District Council to the learning that came from the study.

The study revealed that while the pavilion weighs heavily on the council’s balance sheet, most locals are fiercely proud of it. Even those who don’t use it themselves regard it as a trophy which sets their seaside town apart from others, so its social value stretches beyond its footprint. We uncovered multi-faceted relationships: intergenerational, personal and historical. Many locals associated the building with family events such as weddings and performing there as a child, reminding us that is not merely a civic space but a part of personal stories. The directors began to understand that they were not just managing a contemporary arts space but they were stewards of people’s memories.

Back in the world of local government, it was useful to reveal the impressive statistics that relate to Glyndebourne as a local economic powerhouse (possibly the biggest business in the Lewes vicinity), but finding a language to describe the intangible value of our cultural offer has been the game changer. When we talk about this study we feels as though it speaks to what really motivates us and why we want to protect organisations like the De La Warr Pavilion for the future – they broker friendships, they welcome the lonely, the quiet and the boisterous, they create memories, they raise aspirations and they change lives for the better. In fact, they even let you run barefoot if that’s what you really want to do.

A modest but vital grant scheme
Social capital in practice