Being a young, female leader in the arts is a novelty - one Isobel Colchester has come to realise she must explore and celebrate, if she is to help challenge gender inequalities. 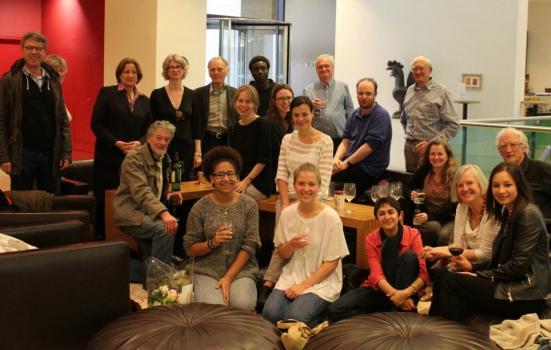 Volunteers at Poet in the City

At a recent Poet in the City event on Emily Dickinson, the biographer Lyndall Gordon suggested that through her multi-directional dashes Dickinson found a way to fight against language to subvert a dominant discourse. Gordon also revealed a side of Dickinson which moved away from the usual stereotyping of this great poet as a retiring recluse who wore a white dress, lived alone in her room and dreamed about love and the world outside. Instead, she made reference to a volcanic, explosive Emily who through poetry imagined a diverse and transcendent universe, full of life, wisdom and power. Contrary to all social expectations and norms, she could live a life ‘confined’ in a physical sense, but still be creative, individual and potent by acknowledging the structural confinement of language and society, and finding a way to move beyond this. I’d like to focus on this notion of recognising structural disadvantage with regards to gender inequality and using creative techniques to find ways to succeed and thrive in an unequal world.

I have realised that by identifying as a young woman and accepting that this is a minority social position, I have become more attuned to my ability to address historic and deeply ingrained inequalities

In researching this article, I spoke to a number of women I respect and admire who operate in different areas of the creative industries to find out whether there are common experiences related to being a woman and whether these correspond to my own experience. There are two common approaches which emerged. The first was having a strong understanding of the structures in which we operate, especially where inequality is overt, and learning how to succeed by being very good at your job and knowing how to work the system. The second was ‘collaging’ your life, creating your own personal structure and environment by bringing together experiences from multiple different organisations and individuals, choosing to work for employers that represent a significant opportunity to test ideas, and carving your own identity in that workplace.

I have a non-traditional arts background, having started my career in a private-sector research consultancy, before moving to work in community development in Lambeth, and eventually to Poet in the City, an organisation which seeks to inspire a love of live poetry through innovative performance. I have always volunteered and had side projects for personal interest and to develop new skills. However, the more I think about it, the more I feel that my varied career path is not ‘un-traditional’, and rather bears a direct relation to my ability to succeed as a woman, and perhaps as a woman in the arts. It seems that I therefore fall into the second category above: a ‘collaging’ woman. While my evidence is only anecdotal, this approach has been adopted by almost none of the successful men I know, bar two (one of whom used to run Poet in the City).

The other theme between myself and the various women I have spoken to is a resistance to making overt statements about how we are different, whether in relation to sex, age or other potential disadvantage. In discussions about how better to promote Poet in the City, the trustees regularly encourage me to seek opportunities to promote the fact that I am a young, female CEO. While my initial instinct is that I would rather just get on with my job, I have come to recognise that it is my responsibility to make a thing of these qualities for the benefit of the organisation, and as a small way of changing the wider ecosystem of gender imbalance in the workplace.

While there are many female leaders in the poetry world, the arts more generally is still primarily led by older men – and this clearly needs to be addressed. I have realised that by identifying as a young woman and accepting that this is a minority social position, I have become more attuned to my ability to address historic and deeply ingrained inequalities. I do this not only by providing advice about tactical ways to work the system, but also in the way in which poetry is presented to and consumed by the public. As an organisation with a mission to create new audiences and re-establish poetry as a major live performing artform, I also have an opportunity and a responsibility to influence how different genres of poetry are perceived, and a chance to attempt to make a more equal and diverse range of poetic styles and voices popular for a modern audience.

Currently, our events which celebrate the classic male poets of the canon are by far our most popular and can always be counted on to sell out. Any surplus generated enables us to programme riskier, more contemporary performances and absorb any loss sustained. It is important to say that we have absolutely no intention of programming fewer of the events that showcase some of the greatest poetry ever written. However, I will without question attempt to level the scales, providing new platforms to under-represented ideas and identities, in a way which does not seek to tie importance to disadvantage, but highlights the brilliance of the work. I need to find creative ways to do this, and for the moment this means using marketing language and content which both excite audiences while speaking to what they know, using this as a way to introduce something new and engender popularity.

As with succeeding as an individual woman in the workplace, this again is about understanding and making use of dominant structures to enable great work to shine through. Recognising the power and strength of an idea and allowing it to erupt, Dickinson style.

Isobel Colchester is CEO at Poet in the City.
www.poetinthecity.co.uk