Stumbling across a concert

As part of a project to build new audiences for orchestral music, Rachel Escott explains her ‘stumbled across’ tactic to bring music to people in everyday places. 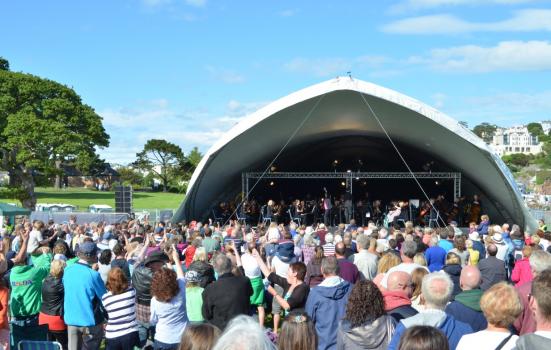 The Philharmonia Orchestra’s ‘digital+live’ tour to the south west of England was multi-faceted. It involved larger than life screens (RE-RITE in 2014) showing each orchestra section in real time, with digital interactions throughout, as well as a truck (MusicLab) taking orchestral exploration into the heart of communities, and concerts, both in public and schools, supported by web resources. The tour centred on Plymouth, Torquay and Truro and also reached deep into specific communities. To maximise its impact it deserved an equally ambitious audience development plan.

The iOrchestra project aimed to reinvigorate lapsed audiences and build new ones in the region, to form a more viable audience base for future orchestras to tour and to grow audience support for regionally based groups. The region is no stranger to music, but favours genres such as choral and brass band music, folk, jazz and pop/rock music. Research on the local population revealed low engagement with arts and culture generally (compared to national averages) and a particular disconnect from orchestral music, partly through lack of exposure or provision. We feared that many would reject the idea of orchestras before giving it a chance. Stealth was an important tool – bringing the music to people unawares, directly into everyday spaces. It would be crucial in changing minds.

Stealth was an important tool – bringing the music to people unawares, directly into everyday spaces

I advised an audience development strategy that leveraged best practices, including this ‘stumbled across’ tactic:

iOrchestra was publicised variously for different target audiences and with different rationales. Broadly, outreach – contacting gatekeepers, explaining and training, facilitating booked visits – was directed to 13 communities of very low cultural engagement or with multiple causes of deprivation. Paid publicity and much social media output was directed more to people who suspected or knew they would enjoy quality orchestral music but suffered from lack of opportunity. We saw them as more likely to tune in to our messages about iOrchestra and the events happening in the region. The vast majority sat somewhere between the two. They had never thought about orchestral music, believed they wouldn’t enjoy it or it was too expensive to try. The ‘stumble across’ approach was aimed at these. MusicLab, RE-RITE and the open-air concerts were placed outside the local supermarket or leisure centre, in school playgrounds, the town car park, on the seafront and in the market square.

We surveyed people attending RE-RITE and the results showed some differences in reactions (a self-fill survey in year 1, likely to have been completed mostly by highly enthused visitors):

This comparison suggests that people might interrupt themselves to take in something that chimes with a previous experience or interest, but their enjoyment may be heightened the less pre-prepared they are. This greater intensity of enjoyment may reduce the learning experienced – people perhaps are more caught up in the moment or have less of an agenda. And the length of time they give to it is shorter (but then they were on their way somewhere else). However, the greater intensity of the experience seems to incline them more to want to repeat it through signing up to receive information.

What does ‘accidental’ mean? I’ve considered it to mean not seeking out or preparing for the art experience, or to encounter it without a conscious decision to do so. At MusicLab and RE-RITE, passers-by came across it but still had to decide to come in. We therefore also learned that surprise and curiosity are not always enough – extremely clear messages are also needed. For all visitors, and perhaps especially those who hadn’t planned in advance for the experience, we also realised a final ‘farewell’ section helped foster a sense of completion and assimilation of the experience.