Dany Louise looks into the reasons why many cities welcome biennials of art events while others are less receptive. 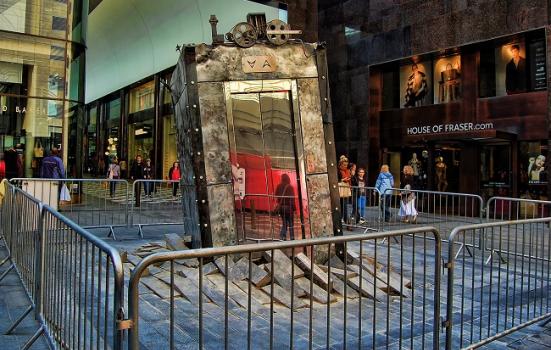 The Lift in Liverpool One at Liverpool Biennial 2012
Photo:

I used the phrase ‘Destination Biennale’ in my thesis title very deliberately since it signifies the excitement and pleasure of visiting a biennial of art, but also references one of the key drivers that sits behind many biennial of art events. If you are not familiar with the term, a traditional definition of art biennials is a large, spectacular visual arts event that re-occurs every two years. It often involves different venues as well as sites in the public realm, with international ambitions indicated by the involvement of well-respected and ‘star’ artists and curators.

For non-arts civic or regional agencies, biennials tick a lot of boxes – high-value visitors spending money in the local economy, animation of a town or city centre

There can be real status and reward to being part of such an event, representing your country at the Venice Biennale, for example, as Sarah Lucas will be doing for England from May. (The pavilion system thrives there, even while it is acknowledged to be an anachronistic hangover from the colonial era.) Closer to home, the Liverpool Biennial has enabled over 250 new artworks to be produced since 2002, a tremendous number, many of which were sited in the public realm, “re-presenting the city to its residents” as curator Karen Newman put it. The Folkestone Triennial is taking the Liverpool model a step further, securing some artworks for permanent display, creating a public art collection that has the potential to transform the look and nature of the town. The 2014 Pavers Park intervention – creating a new, permanent public park on a previously derelict piece of ground to be maintained by the local authority – takes this potential to a spectacular, logical and properly humanist conclusion.

Biennials, in the incarnation I have just described, have become highly desirable entities for these reasons and more, and as a result they have proliferated around the world. Often they are so large, they can't possibly be experienced in only one day, so a visit might involve a hotel stay and restaurant eating, the catching of taxis, the buying of souvenirs, and perhaps a visit to another venue as well – football, theatre, cinema, anything. For non-arts civic or regional agencies, biennials tick a lot of boxes – high-value visitors spending money in the local economy, animation of a town or city centre, contribution to an improved sense of place, and the glamour of artists to entice potentially excellent, plentiful and free publicity.

What's not to like? Isn't this a win-win situation all round? As the Athens Biennial briefly posted on its website: “Biennials and large-scale periodic exhibitions constitute a sizeable part of the production and distribution system of artistic products, an instrument of the economic strategy of the worldwide cultural industry, and a vehicle for the development of cities.” Art has moved from the margins to the mainstream, a core part of many economic development and regeneration strategies, and biennials of art have been adopted worldwide as another weapon in the armoury.

But interestingly, at an event at Arnolfini in 2012 to discuss the idea of a biennial for South West England, participants rejected the use of the biennial notion. They felt that it privileged the international over the local and regional, signified bloated budgets and possibly bloated art, and raised expectations for a particular type of event that did not allow enough flexibility. For these stakeholders, the potentially glamorous association with the international high-end art world and the benefits this could bring masked a fundamental flaw in the model. What actual favourable impact would it have for artists and the arts infrastructure in the South West? Would it simply siphon off increasingly scarce public money and create more losers than winners? On balance, it was felt that a more localised approach with tangible rather than symbolic outcomes would suit the region, and be more appropriate given the economic constraints of austerity Britain.

This reflects what appears to be a significant questioning of the value of biennials of art, a very current international conversation. My research revealed that the dominant rhetoric surrounding biennials of art, that they are catalysts for regeneration, contribute to place-making, have a role in diplomatic ‘soft power’, and are a hook for the trickle-down effect of consumer spending, is not a necessary or foregone conclusion. How each biennial event is initiated, structured, organised and managed plays a huge role in how successful such events might be, not only on an aesthetic basis but in terms of tangible wider benefits to specific places and the people who live there. My research found that public policy and associated funding play a crucial role in mediating between biennial events and an unrestrained globalised market, but that this in itself is not enough. The creation of biennials or other large-scale visual arts events, with aims that are primarily about civic, economic, tourist and even international ‘boosterism’, are unlikely to be entirely successful on either artistic or policy delivery measures.

But allowing for and proactively enabling an ‘arts first’ approach and a variation of the ‘arms length’ policy is likely to greatly increase the probability of successful biennial of art events on a holistic, local, experiential, consistent and ultimately a more valuable basis.