A future for craft

The number of students choosing craft-related subjects is dwindling, research has revealed. Annie Warburton describes the action The Crafts Council is taking to reverse this trend. 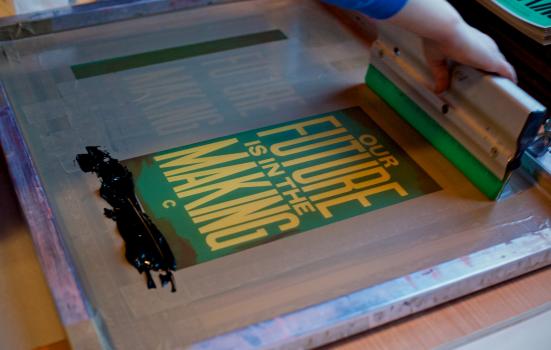 For craft education it has been quite a few weeks for news. First, we launched Our Future is in the Making: an Education Manifesto for Craft and Making, at the House of Commons, together with an open letter to The Times in support of the manifesto signed by over 100 sector leaders. Then, Apple’s Jonathan Ive, speaking at the Design Museum, made a compelling case for putting making at the heart of design education. Meanwhile, strong debate was stirred by Falmouth University’s announcement of the closure of its Contemporary Crafts degree, and by Education Secretary Nicky Morgan’s remarks on the opportunities afforded young people by studying STEM, arts and humanities subjects at school.

The Our Future is in the Making manifesto is a response to shocking figures on craft education revealed in our Studying Craft research which we carried out earlier this year. The number of students taking craft-related GCSEs (Art and Design/Design and Technology) fell by 25% between academic years 2007/08 and 2012/13. During the same period, the numbers of craft courses on offer in higher education dropped by 46%. Falmouth University’s recent news is part of a nationwide trend. Even so, total student numbers in craft degrees have remained more or less steady. Although participation in further education dropped dramatically during the five years, and apprenticeship figures remain tiny.

Learning craft education creates a bridge like no other between art and chemistry, design and maths, ideas and materials

With investment in craft, art and design courses increasing elsewhere around the globe, it is critical that we safeguard the future of craft education in the UK. That is why the Crafts Council led the development of the manifesto, working with makers, educators and policymakers to set out actions to address these worryingly sharp declines in craft education.

With the emphasis on what we can do together to effect change, underpinning these headlines are practical actions for makers, businesses, educators and the government.

Shadow Secretary of State for Education Tristram Hunt, MP for Stoke-on-Trent, then emphasised the value of practical education, describing the manifesto as ‘enormously important’ for all parties. Caroline Dinenage MP spoke of her own experience in manufacturing, focusing on the importance of inspiring future generations by bringing businesses into schools.

While in the background, the team from Jealous Gallery printed manifesto posters designed by Anthony Burrill, the packed room went on to hear from Travis Henry of furniture upcycling social enterprise Out of the Dark, Hugo Johnson, a diamond mounting apprentice at The Goldsmiths' Company who will be representing the UK at World Skills 2015 in Brazil, and AS level student Ella Kenneally of St Marylebone School in London. All three brought home the importance and value of craft education, a sentiment echoed by keynote speaker, potter and writer Edmund de Waal, who described how craft offers people the ability "to work with their own, on their own, with their own head, and even better with their own hands and make something that will last beyond them”.

The messages in the manifesto are echoed in Ive’s emphasis on the importance of designers knowing how to make stuff and of developing materials knowledge to complement the use of digital tools. As he put it: “When you've done it right, there is a wonderful connection between the big idea, the form, the material and how you transformed the material into the final shape.” You can only make that connection through the deep, embodied knowledge of materials garnered through long-term engagement in making – those famous 10,000 hours it takes to hone a craft skill.

Importantly, the manifesto makes the case that creative, practical education through craft is essential not only for students who will go on to become leading makers and designers, but is vital also for the creativity, problem-solving, ingenuity and skill (so-called ‘21st century skills’) that employers seek in fields as diverse as engineering, technology, medicine and film.

The critical point is that arts and science are not in opposition. They go hand in hand. As our international Make:Shift conference will show, we have moved far beyond the binary opposition of C. P. Snow’s ‘two cultures’ (watch BBC’s programme on the subject). And as our Firing Up programme demonstrated, learning craft education creates a bridge like no other between art and chemistry, design and maths, ideas and materials.

Our vision is that every child has a chance to discover their practical abilities, develop their creative talents and become a maker of the future. This vision is rooted in the knowledge that craft skills lead to diverse careers and creative satisfaction throughout life. As we put it in the manifesto, the future is in the making: it’s in our hands.

A future for craft