How can the arts respond to the UK’s changing demographic? Tony Haynes calls for greater recognition for the work created for our local, diversely rich communities. 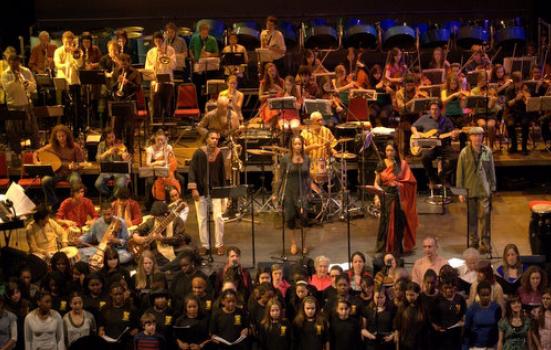 A fierce debate began late last year about the imbalance in arts provision between London and the regions, expressed largely in economic terms. This seemed to me to miss the point and lose the opportunity for a more creative, progressive debate: the imbalance is surely not so much geographic as demographic. And it is not just a matter of money, but the nature of the work funded.

To begin with, it is clearly false to suggest that all Londoners benefit from the £69 that is said to be spent per head in public subsidy in the capital. Which Londoners, and how many? The vast majority of this money goes to building-based state institutions that are national in their reach (and attract enormous numbers of tourists). Their audiences are predominantly white, mostly older and generally well-off. Their programming is inevitably relatively conventional and it is more accurate to characterise the public money they receive as subsidising their audiences, rather than their work, by keeping ticket prices down.

On the other hand, London has a hugely mixed population. It is estimated that currently one in two children are born into an immigrant or immigrant-descended family. Most people have limited means and many have a taste for art different from that programmed by the big institutions. Independent and artist-led companies are therefore hugely important, since they are more likely to create new and original work which reflects London’s ever-widening demographic, and which moreover engages often otherwise marginalised communities in appropriate and challenging participatory activities. They are also able to operate in the neighbourhoods where these communities actually live. For the most part - unlike say the Barbican, the National Theatre, the opera houses and so on - such companies are not building-based, and nor do they generally enjoy the luxury of annual funding. Instead, they must rely on an array of project grants (and if they are lucky earned income) to sustain their work. Yet they reach the huge majority of Londoners who do not at present get much out of that £69 per head apparently lavished on them.

The potential artistic benefits of engaging with this large and growing constituency are enormous: unleashing the power of a range of musical styles, stories, myths and performance techniques from other cultures; discovering remarkable musicians, actors, dancers and writers hidden among them; even providing the means to help schools meet the needs of children who are sometimes overlooked. Various diaspora across the country can also be linked. Work created in one region in collaboration with say Bengali, East European or Central African communities can be replicated in other regions where they also have a strong presence. Artists are inevitably attracted to London - not by money, but because of the creative possibilities such a dynamic city offers. By touring widely, they can give something back to the regions they come from.

In the field of music, the Grand Union Orchestra is a typical example. Whatever our professional touring commitments at home or abroad, we produce work which engages local communities and involves them in participatory projects which enable them to express their lives and experience. This is effective because we have professional musicians from all the major musical cultures represented in the UK today, who are well-known performers in their own right and who can also act as resourceful workshop leaders. They thus form a close rapport with, and quickly gain the trust of, communities whose language, religion and customs they share, and from which they originate. Many indeed are immigrants themselves.

This then feeds back into our professional artistic practice and provides the inspiration for all our work. One example is Undream’d Shores, our next show at the Hackney Empire, which specifically takes the experience of migrants past and present as its theme, with amateur adults and young musicians from the whole demographic of East London joining the full Grand Union Orchestra. This event is part of a much larger programme supported by Creative Europe funding, enabling us to produce a series of comparable projects in collaboration with like-minded companies in France and Portugal. These too reflect the history and demographic make-up of their respective regions, engaging with today’s ‘new Europeans’, and a condition of the grant is that we report and reflect on the project as a whole.

Here therefore is a practical suggestion to help progress this important debate. Together with other artists and groups in different disciplines who like us work with artists from a range of diverse communities, we are proposing to organise a forum or conference in April 2015. This will give these artists an opportunity not just to discuss, but much more importantly, the opportunity to present and share examples of their work.

Migration has shaped our country’s history for hundreds of years and culture plays a vital role in expressing its identity. At a time when anti-immigration and anti-Europe rhetoric is becoming so corrosive, artists need to articulate and demonstrate some of the benefits that migrants – and our ever-broadening demographic – continue to contribute to our society.

Whilst I appreciate and to some extent agree with the sentiment of this article, there are a lot of statements in it that are utterly unsubstantiated, by this author at least. None of the 'facts' are referenced - I don't expect an academic essay but I do expect at least a link to corroborate statements like, "It is estimated that currently one in two children are born into an immigrant or immigrant-descended family" or "audiences are predominantly white, mostly older and generally well-off". These two statements may well be true but it is the responsibility of the author to back them up. Finally, this statement: "Independent and artist-led companies...are more likely to create new and original work which reflects London’s ever-widening demographic, and which moreover engages often otherwise marginalised communities in appropriate and challenging participatory activities" is such an enormous, arbitrary and unsubstantiated declaration as to be laughable. Who are these companies? Who are they reaching? How has Mr Haynes come to this conclusion? What about the massive institutions that do exactly those things he talks about, making an effort to broaden their reach and participation? The National Youth Theatre, The Globe, Rambert, Matthew Bourne's New Adventures, Akram Khan Company, to name but a few. It's disappointing to see such rickety writing, however well-meaning, in the AP.
What a mean-spirited response, particularly from someone claiming largely to support the thrust of my article! There are statistics a-plenty showing how rapidly the UK’s demographic is changing, and even if a future government manages to halt immigration (which is unlikely), we still have a substantial migrant-descended population. In my view it is sensible and honourable to cater for these communities, but more importantly they are a rich cultural resource, and an inspiration to creative artists. If you want a current example of a moving and exhilarating artistic response, just see the Grand Union Orchestra’s Undream’d Shores at the Hackney Empire on November 1st/2nd . (By the way, Akram Khan’s and Matthew Bourne’s are in fact other good examples of ‘artist-led companies’! And I accept that ‘massive institutions’ are making efforts to broaden their reach, but maybe 'principledancer' should in turn provide evidence of this, and their achievements?) However, artists don’t need ‘evidence’ to spur them on and justify their work – just their own observation, vision and imagination. I held off until now responding to these comments – which don’t actually address my main points anyway – because I hoped the article might spark some broader debate. It would be good to hear from anyone who supports, or is interested in helping develop, the ideas I put forward.