The art of risk

Matthew Boswell reports on a symposium organised by Opera North and the University of Leeds and the beginning of a timely new conversation about risk. 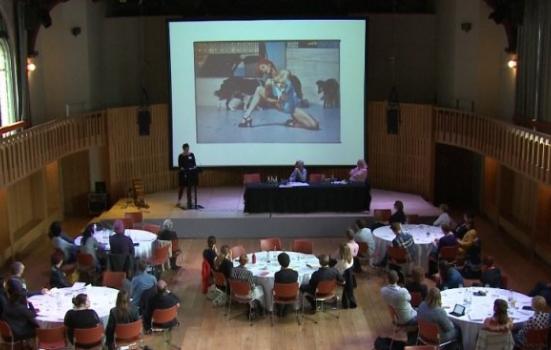 ‘Risk’ is a word that is on the tip of many tongues at the moment, not least those who believe that economic austerity has inhibited risk-taking in the arts, creating a culture of conservatism and ‘playing it safe’. When the results of the national portfolio funding programme were announced by Arts Council England at the beginning of the month, the theatre critic Lyn Gardner was one of many to criticise the funding body for a lack of bravery in its decision-making and argued that it had failed to address regional biases in a significant way. Some days before these decisions were announced however, a one-day symposium called The Art of Risk at the Leeds Grand Theatre suggested that a real appetite for risk still exists among artists, cultural organisations and audiences.

Arising out of a long-standing collaboration called DARE between Opera North and the University of Leeds, this event was conceived very much in a spirit of adventure. In his opening remarks, Dominic Gray of Opera North described the symposium as the start of a cross-sector conversation about risk. Moving away from the defensive tone that has sometimes marked recent attempts to convey the value of the arts, the symposium sought to offer something altogether more confident and assertive. Drawing together representatives from national organisations, such as Arts Council England and UK Young Artists and local arts organisations, including East Street Arts and Slung Low Theatre, as well as academics, medical professionals and members of the public, the symposium recognised that risk is approached in many different ways, and that we have much to learn from each other.

The day began with talks by the theatre and opera director Annabel Arden and Anna Higgs, Commissioner and Head of Digital at Film4. Artists, writers and musicians went on to reflect on their own practice, and the afternoon session included performances by the double bass player Dave Kane who gave a wild, improvised solo set drawing equally on opera, jazz and punk. Leeds Young Authors also spoke candidly about the personal and creative risks they take in their work. Personal risk was very much a theme of the day, with the photographer Yan Preston describing the perils of working on the Yangtze River for her epic Mother River project. The potentially fatal consequences of not taking risks were then underscored by the obstetrician James Drife and the psychoanalyst Susie Godsil who reflected on current approaches to risk in the NHS and healthcare more broadly.

The symposium also framed the debate about risk in terms of wider global and historical trends. Dr Anthony Carrigan reflected on the spiralling number of environmental disasters that have taken place since 1945, asking what risks are being taken with people’s lives, and by whom. Picking up on these humanitarian concerns, the writer Jay Griffiths gave an eloquent critique of the perils of a risk-averse society, a society that over-protects its children and does not submit them to real risks, arguing that a culture of unquestioning obedience can lead to catastrophic consequences, including genocide.

In the Q&As and roundtable sessions, delegates considered how productive, even transformative, dialogues might take place between these different sectors and professions. Many of the speakers asked what the insights of the creative imagination and research in the arts and humanities might mean for those outside the arts. In the final plenary session there was a discussion about how a greater understanding of the ‘poetics of risk’ might inform areas such as education, healthcare and social policy.

Another recurring theme of the day was how to reconcile different understandings of risk, as the word means very different things to different people. As BBC 6 Music DJ Mary Anne Hobbs observes in one of the filmed provocations that trailed the event: “You have to look at the language of the environment that you’re operating in”, as the word is open to many different interpretations.

There was a note of scepticism about the over-use (and misuse) of the word ‘risk’. While there was total consensus about the importance of risk to a healthy and vibrant cultural sector, many questioned how much the rhetoric of risk actually translates into risky practice. Often risk seems to be confused with being a bit edgy, yet edginess is a proven winning formula for many organisations. A real risk, on the other hand, must surely be related to the possibility of commercial or artistic failure.

Such discussions naturally led to the thorny topic of organisational risk management, and the way that this can often neutralise risks, rather than creating a framework that allows risks to be taken. In another of our filmed provocations, Maria Balshaw, Director of Manchester City Galleries and the Whitworth Art Gallery, expands on this theme, recalling a refreshing email from a former colleague who addressed the bureaucratic requirements of a business plan by noting: “The section about risk: that’s where I’m expecting you to write how you’re going to take some.”

A real risk then means that there is something at stake, that there is something to be gained or lost by making a particular decision or taking a certain course of action. This does not need to be left to chance, as we found in our filmed provocations before the event. The approach to risk taken by professional gamblers such as Mike Knights is extremely scientific and methodical. The rich talks, performances and discussions at the symposium rather demonstrated that there are numerous ways of approaching risk and that there might be a certain art to it, a way of doing risk well. In difficult economic and political times, many participants agreed that having conversations about precisely that, the art of risk, might be one way of helping us to conceive of more exciting futures, with a confident arts sector helping society to ask questions of itself, questions that do not get asked when we simply settle for the status quo.

Dr Matthew Boswell is a Research Fellow at the University of Leeds.
arts.leeds.ac.uk/artofrisk
Tw: @DrMattBoswell

The art of risk