Are you up to the challenge? Vicky Prior says there’s much to learn from Max Stafford-Clark’s journal from the years following the cuts. 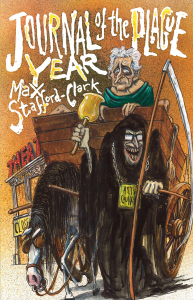 Any journal by someone with a theatrical pedigree as good as Max Stafford-Clark, Artistic Director of Out of Joint and previously the Royal Court Theatre, is bound to be worth reading. What makes ‘Journal of the Plague Year’ so important is that it details correspondence between Stafford-Clark and Arts Council England (ACE) in the two years after the coalition enforced cuts.

At the time, arts practitioners took one of two tones in the face of the news that vital funding would be lost, with little or no time to make it up from other sources: they either reacted angrily, or they accepted it meekly. Those who became the new National Portfolio Organisations, especially those who hadn’t previously been blessed with Regularly Funded status, kept quiet, grateful that they had been spared. Stafford-Clark clearly chose the first option, and the first half of the book displays a man hurt, angry and deeply unhappy to have lost what in real terms amounted to 20% of his company’s funding.

This loss meant Out of Joint had to cut productions by half. Their 2012/13 season did not, for the first time in 20 years, contain a newly commissioned play. The focus shifted from so-called ‘threatening’ theatre to established classics. There is much talk of diversifying income streams and creating sustainable business models. The ACE Relationship Manager, Frank Endwright, becomes an almost comical figure, hiding behind a computer and issuing gentle platitudes. He’d like to help, he just can’t.

I would urge any drama student, or practitioner, to read up on the day-to-day workings of Out of Joint

Reading this today, with the mood in the sector having shifted to ‘let’s get on with it’, I found a lot of the correspondence frustrating. I wanted Stafford-Clark to quit whining and realise he was lucky to still have a theatre company, a job, and some source of income. Having gotten to the end of the book, where Stafford-Clark admits these things, I realised that I’d been unfair – I’d applied hindsight, forgetting that what I was reading had been written when the situation was still raw.

The name Frank Endwright is a fake one, created by Stafford-Clark at the Arts Council’s request to protect the identity of the real Relationship Manager. I sympathised with Endwright, perhaps as a result of having researched the Arts Council at length, and monitored them closely at the time of the cuts. He was clearly operating under exceptionally strict parameters, and you get a real sense that ACE was unprepared and largely unwarned of the scale of the cuts the DCMS was going to initiate. I do think ACE has worked very hard since to provide the best advice to arts organisations, but at the time it seems they were floundering just as much as the devastated artists they were working with.

Happily, this journal also provides details of Stafford-Clark’s working methods. We learn how he programmes a season, the difficulties of touring and the importance of school workshops, all interwoven with some biographical excerpts. While interesting, the biographical details seemed at a tangent to the rest of the book. But I was fascinated by the programming information and hadn’t considered that touring productions can be disadvantaged because the ‘big names’, who are happy to star in a London show, don’t want to leave their home and family to travel around the country for several weeks. The school workshops provided Out of Joint with much needed money and the reader with an insight into how Stafford-Clark directs a piece.

It’s these extra details that make the book essential reading. I fear the central premise, exploring the initial impact of the cuts, will quickly become little more than a period piece on the unfairness of the Tory-led coalition government. But I would urge any drama student, or practitioner, to read up on the day-to-day workings of Out of Joint. They should consider whether the hoops the company has had to jump through in the wake of the cuts is something they would be willing to undertake. Financial business looks set to occupy as much of an artist’s time as the actual art, and anyone considering this career would do well to learn from ‘Journal of the Plague Year’ and make sure they are up to the challenge.