Talent, tenacity and something else

How do you start out as a theatre director? Lisa Spirling describes a regional programme which nurtures visionary, young directors. 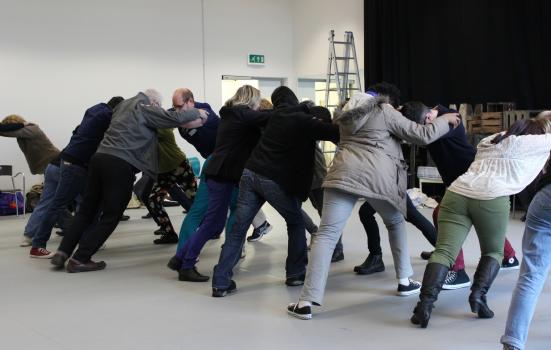 Making the decision to become a theatre director is one thing, saying out loud that you are a director is another, but securing regular work in a rehearsal room directing theatre is something else altogether. It is an irrational, instinctive, (rarely) practical choice to become a director and to stay at it takes tenacity, talent and an all-important emotional hotline to what made you do it in the first place. That hotline could be the lure of the bright lights and greasepaint; it could be that theatre is your only way of communicating with the world at large; it could be a love of the rehearsal room or the addictive nature of having an audience see your work. Whatever it is that got you into theatre, the question then is what do you need in order to stay there?

The JMK Trust was founded in memory of James Menzies-Kitchin, an outstanding director who began his directing career through hard work and passion. James died unexpectedly at the age of 28 and since 1997 the trust, through the annual JMK Award, has discovered and nurtured a new generation of exciting, visionary young directors. Each year the award enables one outstanding applicant to create their own production of a classic play of their choice. Previous recipients include Polly Findlay (currently directing at the RSC and National Theatre) and Orla O’Loughlin (Artistic Director of the Traverse Theatre).

You need to keep the directing muscle working, to keep learning, to fulfill your potential

Along with the innate challenges of a career in directing, there has been much discussion in the arts press recently about the comparative lack of funding for the arts regionally. While the award is based in London, we are tackling this imbalance through our regional programme: we work with emerging theatre directors across the UK to break down increasingly difficult barriers to gaining industry experience and making the transition from assistant to fully fledged director. We currently have eight regional partners including Bristol Old Vic, Birmingham Repertory Theatre, Traverse Theatre Edinburgh and West Yorkshire Playhouse. Other partners which are bringing their skills, knowledge and opportunities to our directors’ groups include Headlong, the RSC and established theatre practitioners from across the UK.

At each venue we have formed an ongoing group for local emerging directors offering free access to workshops provided by the JMK Trust and the partner venue, development opportunities such as watching rehearsals, masterclasses, an online forum and networking. Those taking part in the regional programme have the chance to gain new skills, learn about the industry, see how other directors work, as well as share practice within a peer support group of other directors both locally and around the country. Jon Nash, who was a participant in 2013 says: “Taking part in the JMK Directors Academy at Salisbury Playhouse has been a great opportunity to access things (talks with directors, glimpses behind the scenes, workshops and networking) that have not previously been available locally. It has helped me to develop professionally, gain experience and feel more prepared for pursuing directing opportunities.”

In 2013 we launched a new regional assistant director bursary funded by the Leverhulme Trust Arts Scholarships fund. This bursary enables one emerging director from each of the regional directors’ groups to work as an assistant director on a production at their local professional theatre. So far we have five bursary recipients including Maria Crocker in Newcastle, currently assisting Rachel Chavkin on Northern Stage’s new production of Catch 22. This has been her first opportunity to work on a middle-scale touring production. Stephanie Kempson worked on Jane Eyre at Bristol Old Vic and is now focusing full time on pursuing her freelance career as a director. Stephanie said: “It’s allowed me to move on leaps and bounds in my own personal practice, helped me create professional connections for further opportunities, and given me the space to become more confident in my own skills and vision.”

Many say that the toughest part of directing is getting in the rehearsal room in the first place. But to stay in the rehearsal room takes more than just talent and tenacity. You need to have good ideas and make them happen. You need to make plays, to work, to be paid, to take stock and re-energise, you need to keep the directing muscle working, to keep learning, to fulfill your potential, to connect, to inspire and to be inspired. You need to grow as an artist, as an individual and as part of a company, to be championed, to be seen, to be recognised and for that to then lead to the next job and then the next. And in among all of this you need access to opportunity and a little bit of luck.

Lisa Spirling is Artistic Coordinator of the JMK regional programme for the JMK Trust.
www.jmktrust.org

Talent, tenacity and something else