James Allenby describes how a few innovations made the Big Dance Pledge, the international mass participation dance event, bigger than ever. 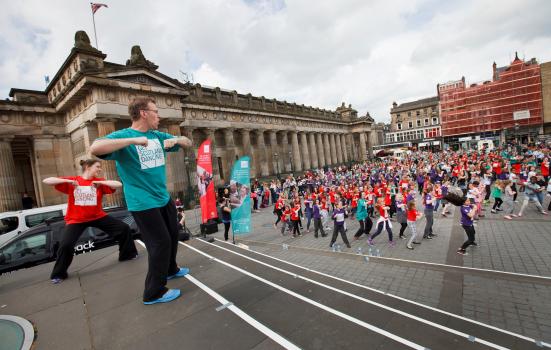 Everybody loves big numbers and the Big Dance Pledge is certainly able to provide those. On Friday 16 May more than 67,000 people in 24 countries performed the Pledge choreography in schools, town squares, sports centres and playgrounds. Big numbers indeed, but can an international participatory arts project really create one size to fit all? The formula is simple: each year (this was the fifth edition) a different company or choreographer creates a dance that is delivered online through teaching videos. Groups then learn it and perform it simultaneously on the chosen day. Learning and feedback from past pledges made it clear that the choreography needs to be simple, the group sizes flexible and that the teaching resources should be inclusive and accessible.

The 2014 Pledge, produced by Big Dance and the Foundation for Community Dance, was created by Scottish Ballet as part of the Glasgow 2014 Cultural Programme and supported by my organisation Get Scotland Dancing (GSD). From our point of view, this project promotes and supports mass participation (with an eye to regular dance participation), while showcasing and focusing attention on Scotland in the year of the Commonwealth Games.

Scottish Ballet’s considered approach, led by the education team and Associate Director: Education Catherine Cassidy, reimagined the model and produced significant positive results. The choreography was simple with short phrases showcasing multiple styles including ballet, Bhangra, Highland and a freestyle section. Choreographed by Education Officer Lorraine Jamieson, the dance was fun, accessible and yet still a challenge to the complete novice (I can personally vouch for that). Dave Boyd’s newly commissioned music and the catchy soundtrack led dancers with audio cues and provided a cohesive and pumping crescendo to the five-minute piece.

Gone were the videos of groups of children or professional dancers demonstrating from the studio. Instead, we meet a ‘Pledge Family’ starring in an introductory film more akin to a music video than dance tuition. Scottish Ballet's creative team worked with Heather Eddington of State of Flux on the overall concept for the films and energy of the dance itself. Early on they decided that body percussion was a great and infectious way to involve spontaneous energy and that a family picking up on that energy and rhythm in a house might be fun and accessible. The Pledge Family live (and dance) all together in a big house with kids, parents, grandparents, uncles, aunties and even a dancing postwoman. The family is diverse and includes a wheelchair user to further indicate that the dance can be modified to suit all abilities. As in past years, detailed films then break down sections of the dance so that groups with potentially little or no dance experience can learn the dance.

Another innovation sees groups with more dance experience encouraged to create their own choreographic response and perform this to the same music. Five examples were created with groups at Dance Base in Edinburgh including ballet, Bollywood, hip hop and even drivers from a local taxi firm. The taxi drivers (a corporate sponsor of Dance Base) filmed their contribution with Edinburgh Castle as the backdrop and received the lion’s share of views online plus lots of press attention. Indepen-dance, Scotland's inclusive dance company, filmed their own version too showing a range of modifications and proving that everyone can take part.

Big Dance made it easy for groups to sign up and participate by tapping into a wealth of contacts through their hub network and dance development officers in local authorities. In Scotland, we supported YDance to deliver training to teachers in areas without dance development officers and Scottish Ballet offered CPD to schools and private teachers throughout Scotland. Energy for the project was maintained through Big Dance's social media presence and international distribution was supported by the British Council through its Connecting Classrooms programme.

As we headed towards performance day, groups around the world were encouraged to join up and dance their pledge together at special events. In Scotland our network of GSD hubs each mounted a public event which included a national media opportunity in central Edinburgh and an event at Glasgow's Emirates Arena. As with many projects of this size it can be difficult to get a handle on exactly what is happening and where. In fact, we only found out about Scotland's biggest performance a couple of weeks before which was self-organised and took place in Linlithgow with 750 local primary school children. Across the rest of the UK numerous groups joined up, performing and filming their pledges as part of this huge global moment. Scottish Ballet worked with Sadler's Wells to produce a flashmob in their foyer before a performance of their touring production of 'Romeo & Juliet'. As the sun set on pledge day 100 dancers occupied the famous Skye Bridge in the Highlands and danced for their community.

Being part of this project created a connection to creativity and a huge feeling of achievement and community for people and groups around the planet. Projects such as these serve to raise the profile of dance, encourage new participants and lead to a legacy of new and re-energised groups who connect with the wider world. This new approach for 2014 proved that by making the Pledge appear easy, by pitching it with a flexible, fun attitude and by organising public events for participants to share the experience, it is possible to get Scotland (and the rest of the world) dancing.