Ten years ago Belgrade Theatre Coventry had to find new sources of income. Joanna Reid tells how its production services subsidiary is now contributing £400,000 a year. 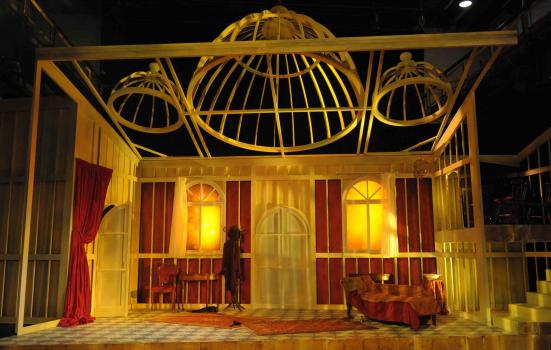 The set for the production of Marriage by Nicolai Gogol
Photo:

For the Belgrade Theatre the need to find substantial new sources of income hit us about ten years ago. We were preparing for a £14 million capital project that involved building a second flexible auditorium (B2) and rehearsal space, and reinvigorating the original 1958 listed building, including relocating the front entrance. The result is a building that is eye-catching and impressive. It is also 73% bigger than it was, and so carries much larger operation costs. Funders made it clear that we would be on our own, despite this increase in costs and despite what was happening in other parts of the country where funders responded to similar situations by increasing their funding (remember those days?).

So we needed to maximise existing income streams, playing to the strengths of our mixed programme business model and looking at what we had that might generate new income. Two main strands emerged.

We now build, paint sets and make costumes for theatres around the country and are moving into building exhibition stands

First, like many others in the sector, and with a lovely facility to offer, we developed Events & Conferencing. Although it definitely plays understudy to our main purpose to produce and present theatre, it does an amazing job securing meetings and conferences around the theatre and community programme, turning the fact that a conference might take place on top of a set into a selling point. It turns over £58,000 a year and brings in enough money to fund one in-house production. It also provides more work for casual ushers and enables us to offer more opportunities to engage with the local business community, which has other benefits.

The second development has been to turn our in-house workshop into a commercial set-building operation called Belgrade Production Services (BPS). The workshop facility had been at risk of closure because it was so under-used, given that we can only produce our own work for half the year. BPS has earned over £1 million since 2008 and its annual turnover is now £400,000 a year, making a sizeable net cash contribution to the theatre. It has also retained skills in Coventry by securing nearly 10,000 hours of freelance work a year. It is run through our wholly owned trading subsidiary and is managed by the production department staff, supported by accounts and communications (but has not involved increasing staff in these departments). On the ground we employ a core team of four  - Head of Workshop, Head of Scenic Art and two in wardrobe - and engage freelancers as required. We now build, paint sets and make costumes for theatres around the country and are moving into building exhibition stands. Early clients were mainly in the Midlands but our contacts in the industry, particularly through freelance designers and production managers, have extended our reach. During 2014 we plan to invest in a CNC lathe which will allow us to decrease drastically the time it takes to make certain things, and to take in third-party cutting work. That should enable us to make another gear change in income that the continuing decline in core funding is demanding. Our clients are diverse too: local, in London, regional and touring, subsidised and commercial theatre and dance companies, as well as a growing number of museums.

We have a cracking team who are proud of the work they do and the success of the business, which has been built on quality, value for money, and being one of the few such operations that offer a one-stop shop – set building, scenic art, props and costume services. It is satisfying that our skills are supporting other performance companies as well as earning us money. It is a great story all round.