A Cast of six thousand

Doncaster’s new arts venue opened in September - a response to negative comments about the town’s history of low engagement with the arts. Kully Thiarai pauses to reflect on the overwhelming welcome that the theatre has received. 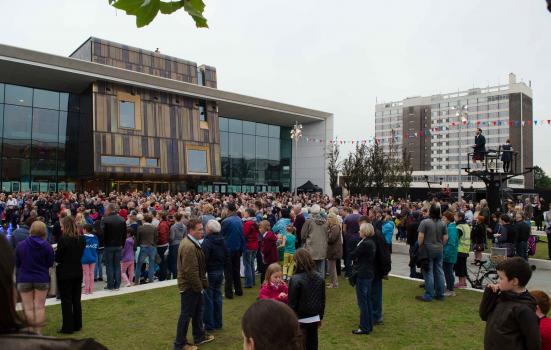 It has been less than a year since I began working full-time as Director of Cast, a new performance venue in Doncaster. As I take a moment’s breath six weeks from opening the new venue, I am astonished by what has been achieved and the genuine enthusiasm and curiosity that our programme and our space has engendered. Particularly as everyone kept telling me there was little or no engagement in the arts from the town’s people.

Over 6,000 people passed through our doors over the opening weekend in September, offering up a challenge to those who questioned the value of a brand new £22m building as part of a £300m civic and cultural regeneration programme by Doncaster Council. It is a bold and brave commitment from a local authority that is often presented as beleaguered and failing. Yet, it has big ambitions and continues to forge new partnerships and strategic developments in an attempt to bring greater investment into Doncaster and grow the economic and social collateral of the town. Cast plays a significant role in that ambition.

I have been humbled by the enthusiasm, commitment and curiosity of the public, by artists and companies who took the leap of faith with us

I do not believe there is a lack of creative potential or ambition in the town’s people, merely an untapped and invisible voice needing an opportunity to be unleashed. Our opening few weeks have shown just how much appetite there is from the public. Sometimes you have to take a leap of faith and create the pathways along which others can follow at their own pace. To be fearless and yet not reckless, to lead and yet know when to step aside and let others guide you, to fight for what you believe in, while always being willing to see other points of view. No easy task especially when you are creating something new.

Our vision is to become the cultural living room for Doncaster. A meeting place where quality performances, participation and provocations can take place. A place where we can collectively gather, be surprised and entertained, challenged and nurtured, share our stories and engage with big ideas. The building is a great resource and these kinds of facilities have not existed in the town before. It has a beautiful 620-seat lyric theatre with a fly tower and orchestra pit, a flexible second space ranging from 100 to 200 seats depending on the configuration, a large dance space, a drama space, two meeting/seminar spaces and a café bar that looks out on to a public square. Local artists and audiences constantly say to me that they can’t believe this is in Doncaster.

Most people would probably have opened with a single event: a new production, some kind of ceremony or an ‘open-house’ event. We decided we needed to do all these things. Were we insane? Yes! There were plenty of legitimate reasons not to go down this route, but it was also vital that we signalled our ambitions, challenged people’s perceptions and gave everyone a chance to engage with us in whatever way they wanted to. We had just one chance to say: “This is your place and you are all welcome.” Whatever the risks, we had to embrace this unique opportunity.

‘The Cast of Thousands’ was our opening ceremony. It was a free event that took place outside in the public square. Created in partnership with Slung Low, it celebrated the transformative power of the arts through three newly created fables. Written by Alan Lane and illustrated by local artist Rachana Jadhav, the stories appeared in large graphic signs across the town creating story routes into the public square. Working with professional and community performers these fables acted as the framework for the celebration. We had a fiddler on the roof, a fire monster in the square, a dance flash mob, a jazz trombonist up a tower, a specially composed anthem sung with a newly formed community choir and more besides. The finale culminated in us flinging open our doors and welcoming everyone in. My only regret is that we did not have a photographer inside the building to capture the moment when the crowds, tsunami like (as described by a staff member inside), rushed to the open doors.

It was overwhelming and wonderfully unexpected as 1,200 people entered the building. We were bursting at the seams and shortly more people would be arriving for the opening night production of ‘The Glee Club’ by local playwright Richard Cameron. Set in the summer of 1962, The Glee Club is a touching, poignant comedy about a group of singing miners in Doncaster.

Open House was our third offer to the public. Over the weekend the building was animated with a range of activity: from dance classes through to puppetry workshops, from knitting groups to hip-hop crews, from music workshops for toddlers through to one-on-one performances, from orchestras through to poetry readings, from formal tours to being able to just wander.

As a new enterprise and particularly when some things are free it is impossible to know who will turn up. At 5.30pm on Friday night after a day of torrential rain there was little sign that at 6pm we would have a square full of expectant public, never mind one that generated such a sense of occasion that continued across the weekend. Who knew that a play about singing miners would touch such a nerve and generate such extraordinary word of mouth that even naysayers were persuaded to come and became our most evangelical supporters? Who knew that through Open House people would not only come to have a nosy but stay for hours and even return the following day wanting more?

I have been humbled by the enthusiasm, commitment and curiosity of the public, by artists and companies who took the leap of faith with us without knowing quite what they might find when they arrived, by partners and collaborators who helped make the opening weekend and launch season such a dynamic and tangible statement of our future intent, and by the small staff team who pulled together, worked tirelessly, beyond the call of duty to deliver to deadlines that at times seemed impossible.

Cast means many things as a word. It also must mean many things as a building. It is the central four letters in the name of the town. It brings a cast of players to mind and hence the notion of people is inherent and core to our values. Doncaster matters – the people of this place matter. Cast is a people’s theatre for the twenty-first century and can only succeed if everyone plays their part. Cast is a place you can call home, a cultural living room where you can inspire and be inspired and that celebrates and nurtures the creative ambitions of all those who join us. We are a Cast of thousands.

I was unable to make the exciting opening weekend, but I had the opportunity to visit Cast a few weeks later and I was knocked out by the venue. As well as being a "cultural living room for Doncaster", it should be a valuable addition to national touring circuits.