Captioning theatre performances may be logistically demanding but a small touring company has just managed it − and so can others, says Mark Makin. 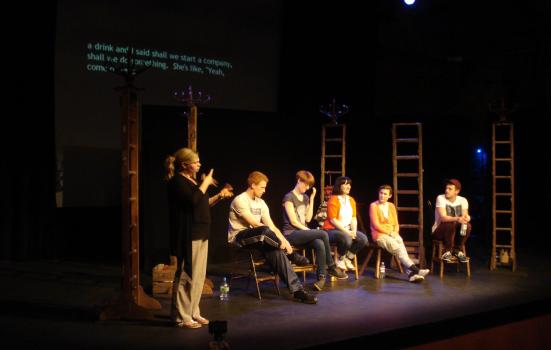 A Q&A session at Norwich Playhouse with signing and captioning

Set up in 2012, 'house' is a theatre touring and audience development initiative for the South East and East, funded by Arts Council England. We support 110 venues in our network by touring quality theatre productions, listening to their programming needs, as well as helping them to make their programme more accessible.

In May we arranged for a four-week tour of The Wrong Crowd’s debut show ‘The Girl with the Iron Claws’, and for the first time offered fully subsidised captioning. This was taken up by over half of the venues and for most of them this was their first opportunity to offer captioning. The UK has 10 million Deaf, deafened and hard of hearing people, while 70,000 people use British Sign Language as their preferred language. There is real passion among venue managers to make their programme more accessible, but budgets are small, and these initiatives are beyond the financial reach of most small and mid-scale venues.

If you have not experienced a captioned event, it is similar to television subtitles. A six-foot, long, black box is placed near the stage, and a captioner cues the correct line of the specially formatted script at the right moment. For a non-scripted event, text is generated by a highly skilled speech-to-text reporter.

I cannot take credit for house’s captioned tour as the idea was presented to us by Caroline Richardson, director of Norwich Playhouse. Having previously worked on projects for Deaf people, Caroline was keen to take the next step and organise their first captioned performance. When we proposed to tour this production, Caroline knew the show’s strong visual style would complement captioning, and we discussed extending the captioning to other house venues.

Seeking advice from STAGETEXT, a national charity which provides captioning and live speech-to-text, Deaf Connexions Norwich and its Deaf intern Ellen Parfitt, Norwich Playhouse widened its offer to include a signed pre-show talk and a post-show Q&A, both signed and captioned. We hired the captioning equipment from STAGETEXT, which in turn advised the venues on how to reach their local Deaf and hard of hearing audiences. The show’s technical manager was trained in how to set up the equipment and we contracted a trained captioner to prepare the script, travel to each venue and operate the equipment. Following a short London run, the tour hit the road.

We knew that one captioned performance in a venue would not be enough to reach an audience disenfranchised from live performance. Unanimously venues stated that they wanted to offer more captioned performances to build up their audience but they simply could not take on the cost. Kings Lynn Arts Centre's Liz Falconbridge wondered whether improvements in voice recognition software or venues training an in-house captioner would make it more cost-effective. John Luther from Reading’s South Street Arts Centre cut straight to the point: captioning is not just about venues, it is also about touring companies. Tours are the best way to make the current method cost-effective, and clearly it is up to companies to embrace captioning and budget for it.

I took our feedback to Lissy Lovett at STAGETEXT, who agreed that touring was the area to focus on: “It isn’t possible to create good quality captions without the input of a trained captioner. The English language is just too complicated for captioning to work effectively without a trained technician.”

Later this year we will be touring a double bill of contemporary circus which will have a wide, cross-generation appeal. Crucially, the show’s narrative is conveyed without dialogue. Deaf audiences need to be courted by both commercial productions and fringe theatre, to be persuaded that theatre can be part of their lives. We have taken a step forward in developing the touring ecology. It is now over to the larger touring companies to take on the challenge with us.