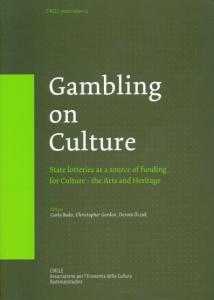 It may have been written almost a decade ago, but in the UK this book has never been more relevant than it is today. As state arts funding falls victim to wider Government spending cuts and MPs start taking an interest in the potential of National Lottery receipts to plug the gap, understanding how similar scenarios play out in other countries gives us a better platform on which to assess the potential benefits and dangers of such a move. This book provides such a platform.

It is an edited work, presenting the reflections of experts from 17 countries who contributed to a round table debate hosted by the Associazone per L’Economia della Cultrua and CIRCLE, the Cultural Information and Research Centres Liaison in Europe in 2002. Written in two sections, it first documents the ‘dilemmas and challenges’ inherent in lottery funding of culture and goes on to give an overview of state lotteries at that time in other parts of the world, including detailed case studies from eleven countries. It starts from the basis that lotteries may be both “useful and functional to cultural policies”, providing the opportunity to “diversify the financing of cultural organisations, stimulating their entrepreneurship.” The contribution of lotteries to the overall funding for Culture is judged as having been beneficial, though its long-term sustainability and potential insecurity is a highlighted as a key concern. This and other potential pitfalls are not only explored in detail, but also illustrated with examples from the cultural sector in Europe and north America, and from other sectors.

The thorny issues of additionality and substitution quickly come to the fore, and the observation that “50% of Heritage Lottery Fund in the UK is in grants that go to buildings or projects owned by the State” is used to illustrate the difficulty of even defining additionality. The conclusion drawn is that there is “ample evidence” of Lottery revenues becoming a substitute for tax-based arts funding when governments are under fiscal pressure, though the extent of this substitution has varied across the world. Warnings are issued about the importance of transparency and vigilance in protecting the principle of additionality and the funding practices associated with it. The arguments around merging or maintaining separate funding streams for state- and lottery-funded cultural expenditure are also raised, but based on the evidence at the time, no firm conclusion could be drawn about desirability or otherwise of these policies. The suggestion is raised that an optimal solution may be for separate funding streams to be accounted for, but under a single coherent funding strategy that covers both sources of income.

The case studies in part two of this book are certainly out of date. It was written as the debate about the merger of the Community Fund and the New Opportunities Fund to form the Big Lottery fund was taking place in the UK, and the prospect of a dedicated Olympic fund was being considered. Much has happened since, in the UK as elsewhere, but some of the lottery ‘issues and concerns’ described at the end of each case study still resonate today. Italy was facing the possibility of legislation that would broaden the scope of ‘cultural activity’ that could be funded through the lottery; in the Netherlands there was talk of subsidy cuts being mitigated by increased lottery funding; and in Switzerland there were fears that the establishment of competing lotteries  would reduce the returns to the arts and culture. An update on the outcome of these scenarios is all that is missing.

This book is hardly a bedtime read but its importance shouldn’t be underestimated. And it should certainly be required reading for anyone with even half an eye on making changes to UK lottery law in response to the “arts emergency” . Frying pan-and-fire scenarios must be avoided at all costs.

Liz Hill is Editor of ArtsProfessional