Sadler’s Wells Wild Card initiative has not only offered unique opportunities to young artists but has also attracted a new ‘offbeat’ audience. ArtsProfessional finds out more. 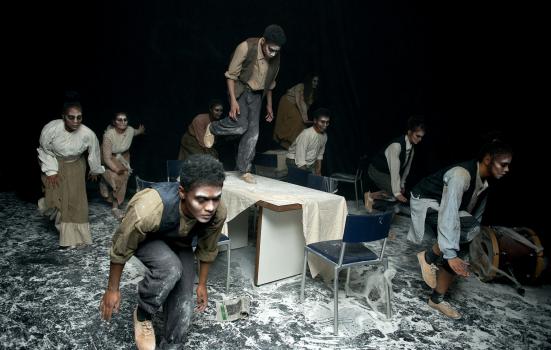 'The Awakening', a pre-performance installation
Photo:

Wild Card was launched earlier this year at Sadler’s Wells, London’s premier venue for contemporary dance. Hailed as a pioneering, long-term initiative that gives young artists the opportunity to present the work of their choice in the Lilian Baylis Studio, its first season saw three young and emerging artists perform: Bellyflop on two nights in January, Dan Canham on one night in February and Ivan Blackstock on one night in March (extended to two after it sold out).

Emma Gladstone is Sadler’s Wells’ Artistic Programmer and Producer and is behind the initiative. She was keen to introduce new, younger artists to the theatre: “We wanted something new, and by offering artists the opportunity to curate their own show, and suggesting that they invite at least one other artist to perform with them, we were confident that we would get something very fresh and exciting.”

Even Emma was impressed with how enthusiasitcally the artists responded to the curating element of the contract. Ivan Blackstock invited 70 people to perform on stage with him, mostly dancers and collaborators, but also the Company of Elders, the non-professional resident company at Sadler’s Wells of dancers over the age of 60. Dan Canham invited a group of Morris dancers, called the Molly dancers, to perform before the show in the bar. Using as many other public spaces in the theatre before and after the show became almost compulsory by the time it was Ivan Blackstock’s turn. Known not only for his dance work but also his installations, he created a pre-performance installation in one of the theatre’s lecture rooms (see photo above). Then after the performance there was a DJ in the bar keeping the club atmosphere alive. Emma comments: “It was a true celebration of everything the three artists have been doing. The shows brought to the theatre work we might not know about or would necessarily programme. It was a real pleasure to see their enthusiasm.” The initial selection of artists was according to Emma made out of very opinionated people, people with a spark”, who went on to devise three very different events.

This first Wild Card season was not only an artistic success for all involved but Sadler’s Wells believes that it has opened up the theatre to new circles and new audiences, and possibly a slightly offbeat audience at that. Emma says: “These Wild Card productions brought in quite a different audience to the typical audience we see with our main stage productions. They came to see young artists in charge of programming the Lilian Baylis Studio each night. These audiences are interested to see what the artists will put on – as their peers and as people they have heard of.”

For its part Sadlers Wells treats the initiative in much the same way that it would any other show in the theatre. The three artists were offered a week of rehearsal space and the services of a production manager. The shows were promoted up to nine months in advance, the ticket price was the same as any other show in the Lilian Baylis Studio (£15) and the three artists received a fee.

Evaluating the first season of shows, Emma says: “The artists all enjoyed the experience, it gave them an interest and insight into curating and programming. They linked up with some artists they hadn’t previously worked with and they achieved something really creative.” Wild Card may have helped them gain funding too. Ivan Blackstock has since secured a grant from Arts Council England (ACE) and Dan Canham is doing a new show with support from ACE.

When asked if there is anything similar in the UK that gives young dancers the opportunity to perform in a high-profile venue like Sadler’s Wells, Emma can think of nothing: “For music there are similar schemes but for dance there’s nothing quite like this.”