Resetting the Stage: Public theatre between the market and democracy

Christopher Maughan values this reflection on the dichotomy between commercial and public theatre. 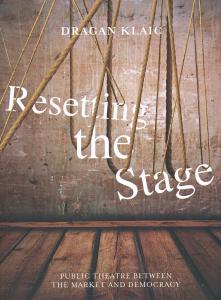 Dragan Klaic, who died in August 2011, was renowned in Europe as one of its leading intellectuals in the performing arts. A man of energy, vision and generous spirit he was a tireless advocate of the arts in a European context and this had particular expression in two areas of cultural activity, theatre and artistic festivals (he founded the European Festivals Research Project).

Klaic was also a prolific writer with several books, and dozens of conference proceedings and journal articles to his name. However, one project that he was unable to complete in his lifetime was Resetting the Stage: Public theatre between the market and democracy, which has been published posthumously by Intellect.

This book confirms his place amongst Europe’s most distinguished theatre scholars, an accolade which derives from his formative years in Serbia, his PhD from Harvard and his life and work in Amsterdam where he moved in 1991 to escape the conflict in Serbia. From Amsterdam, where he was Director of the Netherlands Theatre Institute until 2000 and where he lived until he died, Klaic maintained a punishing schedule of trips through which he developed an encyclopaedic knowledge of theatre and which has been distilled into Resetting the Stage.

A key feature of the book is his exploration of the value of subsidised theatre in which he presents a convincing argument for it as a necessary complement to commercial theatre. He does not dismiss commercial theatre but he argues with authority and passion that the future of subsidised theatre lies not in mimicking its commercial counterpart, but in asserting its own artistic distinctiveness and the benefits this confers on the public.

The book provides a comprehensive and historical analysis of both public and commercial theatre, beginning with a discussion of the roots of public theatre in the nineteenth century ideology of nationalism, as he states: “The concepts of a nation and nation state postulated national theatre as an emblematic institution and as a privileged ideological platform”. He discusses how this encouraged the development of an independent theatre movement as exemplified by MXAT, the Moscow Artistic Academic Theatre. MXAT, which was led by two Russian innovators, Vladimir Nemirovich-Danchenko and Konstantin Stanislavski “drew up a set of norms, mutual agreements and common aspirations’ which created ‘a coherent ensemble with a rich repertoire...”.

He draws on these features to examine how public theatre developed across Europe, especially after World War II, and the dichotomy that emerged between commercial and public theatre. Throughout Resetting the Stage he explores how public theatre evolved to deliver particular benefits which cuts in public sector budgets put at risk due to a failure to recognise that the particular benefits are not ones that commercial theatre is set up to deliver. The benefits he discusses include:

Klaic discusses the symbiotic nature of the relationship between the two and acknowledges that commercial theatre can and does tackle challenging material but he asserts that this is not its principal role or objective. Having established the distinctive role of public theatre in the late 20th century he goes on to present a well argued and documented analysis of the particular strengths and weaknesses of public theatre derived in part from its reliance on public subsidy.

In a series of challenging chapters Klaic discusses:

In each chapter he provides a critical analysis drawn from his experience of attending theatre across Europe. His personal network of theatre producers and directors ensures that his comments are grounded in practice. He was also a regular contributor to theatre conferences where he rarely failed to be stimulating and provocative in support of the cause of public theatre in which he believed so passionately.

For many arts managers in the UK Dragan Klaic may be an unfamiliar name. Resetting the Stage may be Klaic’s final book but for those working in public theatre and other publicly funded arts organisations it provides a good introduction to his ideas. More importantly, it encourages a way of thinking about arts practice and funding that we need to champion in the current economic climate as Klaic himself did for more than 40 years.

Christopher Maughan is an Associate Research Fellow of Arts and Festivals Management at De Montfort University.