Jane Coyle tells how DU Dance’s inter-generational programme has recently seen a dance performance by women of all ages, including some in their eighties. 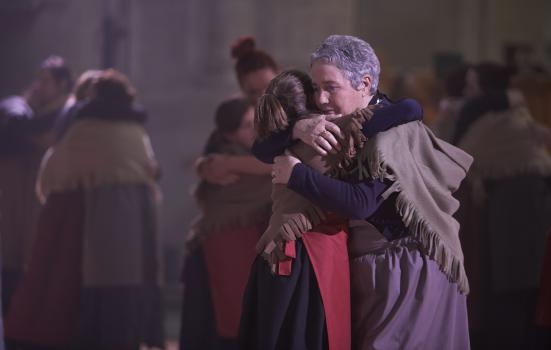 In November last year one of the headline events of the annual Ulster Bank Belfast Festival at Queen’s was DU Dance’s world premiere of ‘Alternative Energies’. The magnificent interior of St Anne’s Cathedral provided a thrilling setting for this locally produced, multi-faceted performance, which sat comfortably among the line-up of international names gathered together to celebrate the festival’s 50th anniversary.

‘Alternative Energies’ is a three-year project, supported in this first year by the Queen’s Silver Jubilee Trust and the Arts Council of Northern Ireland’s Arts and Older People Fund. It marks the latest chapter in our ‘Bridging the Gap’ inter-generational programme. The participants emerged through the auspices of project partners Girlguiding Ulster and Clanmill Housing, with which we have worked on a number of occasions. The younger girls were drawn from a Belfast primary school which has also been involved in other projects with the company. Under the leadership of our co-founder and artistic director Mags Byrne, the women came together to dance, share life experiences and learn from one another. In few other contexts would they have the opportunity to meet and take part in a collective creative initiative on this scale.

The first phase of the project saw the production of two short films by director-cameraman Gerard Stratton. They were shot on location in the atmospheric surroundings of Slemish Mountain, Portglenone Bluebell Wood, Belfast Lough and Conway Mill, a restored linen mill, where some of the elders and their families had once worked. These haunting films, which are integrated into the performance, vividly portray human connections to the elements and life forces of the natural world. The performance constitutes the second phase and integrates the dancers with singers and musicians. Violinist Ruby Colley was commissioned to compose a score for string quartet and choir, to be delivered live at each event.

The women engaged in an intensive six-week series of dance workshops, leading up to the performances. The piece links time and energy in a reflective way, using sound and visuals to bring the outside world inside. With night falling over the city, heads turned in the hushed silence as a line of elders, wrapped in heather-coloured shawls and skirts, made their way slowly along the nave − some walking, some supporting others, one gliding forward in a wheelchair, their dignified movements bearing witness to hard-working life experiences and child-rearing. They were followed by an exuberant group of younger women, celebrating and embracing the world around them. And the picture was completed by the arrival of little girls, running, jumping, taking refuge in the arms of the elders.

Jane Hood, a resident of Moatview housing scheme for older people, speaks for her fellow elders: “There was a while that I was doubtful I could do it, but I knew taking part was something I really wanted to do and I had to stretch myself. I have learnt not to judge by appearances. All youngsters are not the same, you just hear of the bad ones. These young girls are just fantastic. Mentally and physically, it has been refreshing and challenging. We live in a bit of a cocoon here. Now I feel like a recycled teenager, which is something to brag about. I am proud of myself.”