Zoë Briggs describes how her Creating Learning department at the Ambassador Theatre Group is successfully targeting the growing retired audience. 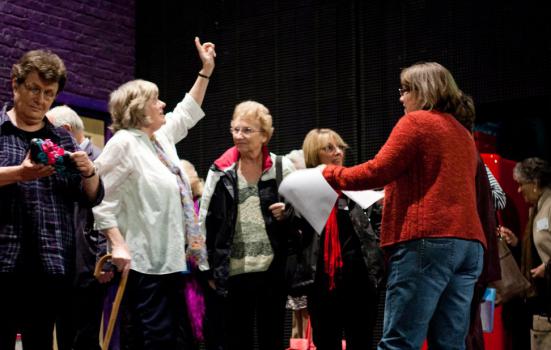 Older demographics proved one of the most responsive target audiences in 2012 for my department, Creative Learning. With more time, money and enthusiasm than their younger peers, the growing retired audience has remarkable potential for engagement and our relationship with the University of the Third Age (U3A) and other lifelong learning cooperatives is set to expand.

Our partnership with the U3A began in March last year with two study days at the Piccadilly Theatre in the West End. This was followed by another similar event at the Playhouse Theatre in the autumn and exclusive theatre tours for the U3A at the Duke of York’s and other theatres across the country. In addition, we welcomed local U3A members to the Milton Keynes Theatre last October with a special focus on ‘The Phantom of the Opera’. In the West End, the study day model was extended in partnership with the Women’s Institute federations of Berkshire and Essex for an event at the Savoy Theatre.

Study days vary in their particular focus, but generally consist of workshops led by theatre professionals for between 60 and 100 older learners. Previous topics have included playwriting, theatre history, technical theatre, directing, voice, costume and make-up. The schedule allows time for a catered lunch, tea breaks and a Q&A with the practitioners to finish the day. Participants pay a reasonable fee to take part and are often given access to ticket offers to complement the experience. Discounting both tickets and workshops in a combination package encourages participants to attend productions, making a measurable contribution to overall income. In fact, study days are often more popular with this demographic than the shows themselves, allowing for valuable audience development.

Our theatre managers and venue staff help to host the study days alongside the Creative Learning team. Specific challenges lie in the participants’ mobility – the listed buildings often contain staircases and tricky steps to access the most interesting parts of the theatre. Most rewarding is the learners’ enthusiasm and appreciation of the exclusive experience offered; the theatrical world remains mysterious and alluring to many members of the public, young and old alike.

Engaging with established groups such as U3A and the Women’s Institute also makes marketing straightforward as they hold regular meetings and have frequent newsletters and magazines. Forward planning is essential to allow for a reasonable lead time and maximum attendance. Successful events have connected with particular local groups; others reached capacity by extending events to members nationally.

An unexpected bonus is the care taken by participants over thorough feedback, which has been very enthusiastic with many learners returning for repeat events. Particular interest was shown in the opportunity to engage with theatre professionals and share knowledge and experience in a creative environment. Constructive criticism has helped to hone the study day model over time, making tweaks to programming, handouts and the schedule. Participants showed curiosity in future opportunities to learn about opera, dance, and acting.

The Ambassador Theatre Group is making plans to continue and extend the fruitful relationship with the U3A, with further study days planned for this year. Next in the West End will be a special event focused on the work of Harold Pinter, coupled with tickets to ‘Old Times’ at the Harold Pinter Theatre. Also in the pipeline is a practical event to explore the voice in theatre.