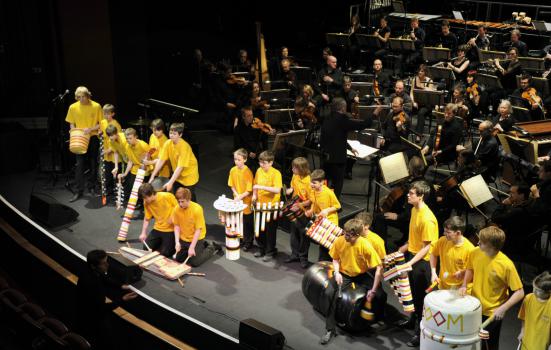 There’s a perception that teenagers and orchestral music do not mix or when they do it is a bit like oil and water. Over the next two years Orchestras Live will be touring First Time Live Youth, aiming to change the way orchestral concerts are perceived by young people. The initiative gives young people the responsibility for programming, presenting and performing in the concert, making a first-time orchestral concert experience a catalyst for longer-term musical engagement and appreciation.

There will be two strands of touring taking place in spring 2013 and spring 2014: a tour of large-scale concerts by the Royal Philharmonic Orchestra to young people in Hull, Scunthorpe, Doncaster and Grimsby, alongside a tour of medium-scale chamber orchestra concerts by City of London Sinfonia to young people in Luton, Harlow, Fenland, Peterborough, Thurrock and Mansfield.

The concerts will take place at a range of major venues and the programme, chosen largely by young people, will include a range of orchestral repertoire of different genres, as well as music from TV, film and computer games. We have specifically chosen venues outside major urban and affluent areas because we know that people in more underserved places are particularly disengaged from live music experiences. Most young people in the places where we plan to deliver First Time Live Youth have never had the opportunity to experience a live orchestral concert, let alone the chance to be actively engaged in its programming and presentation. Communities being targeted include former mining areas, developing towns, diverse cultural areas and rural communities.

Detailed planning with music education hubs and other local partners will take place six months before the concerts targeting schools and recruiting a core group of young people who, with the support of Orchestras Live and a team of orchestral musicians and music service tutors, will design aspects of the orchestral concerts, on behalf of their peers.

A partnership with MakeWaves, the social learning environment that provides social media for education, will enable young people to share their work with others, promote the concerts and create interactive online resources that will be shared with other young people in the area and more widely across the whole country.

Working closely with venue managers and orchestras, we will help to maximise the impact of the events, applying the knowledge and connections gained through the tour to develop programming for young audiences. This could include building relationships through more systematic liaison with music services, schools and youth groups, audience development schemes and increased opportunities for involving young people in programming.

Skill-sharing will also be inherent in the direct involvement of young people in programming and presenting the concerts, working alongside professional orchestral musicians and managers as well as venue staff. For example, in Thurrock the intention is for a core group of young people to be supported by the National Skills Academy for Creative and Cultural, enabling them to gain event management and production skills in the context of orchestral concerts.