One size fits one

Mary Paterson reflects on the different meanings of collaboration 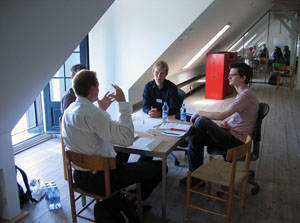 Ever since the spectre of public spending cuts first began to loom over the horizon in 2008, policy-makers and strategists have urged the arts sector to work together to pool resources and share practice. In fact, long before this – before we knew we were living in the halcyon days of art and public spending – we were all demanding this of each other. But in my experience, collaboration means very different things to different people: so is there a model for collaboration that we can all follow, or is it something so individual that it can never be reproduced?

Speaking at Arts Council England’s (ACE) ‘State of the Arts Conference’ (SOTA) in Salford this year, Culture Minister Ed Vaizey urged arts organisations to ‘collaborate.’ He talked about the collaborations his department, the DCMS, is trying to instigate with other offices in Whitehall. And the theme of collaboration was echoed throughout the conference – itself a ‘collaboration’ between ACE and the BBC. Vaizey also alluded to the difficulties of cutting across government bureaucracy. Anyone who has worked in a large public sector organisation – a local authority, for example, or a university – will recognise what he means. At the ‘Durations’ conference, hosted recently at Culture Lab at Newcastle University, David Butler described Culture Lab as the site within the University where cross-disciplinary conversations can take place. The building, a light and welcoming space modelled from the old Assembly Rooms, is unusual in that it gives material presence to the aspiration of collaboration: without it, cross-disciplinary conversations might not happen at all.

This is in stark contrast to what collaboration means to small organisations. When I worked with Extant, a small theatre company, we collaborated as a matter of course. Whether it was to share equipment or develop ideas, we forged relationships with people from inside and outside the sector, and from a wide range of disciplines. For example, during the development of the immersive theatre piece ‘The Question’, Extant collaborated with Battersea Arts Centre (BAC), The Open University (OU), a team of robotics engineers, two set designers and a sound artist, to name but a few. The formal collaboration document – a legal contract – was signed between Extant, BAC and the OU. But the informal collaborations – staying late, sharing resources and pulling together to get everything done – were enacted by every member of the team. In other words, ‘collaboration’ was about much more than a formal agreement carried out at an institutional level. It was also a way of working – a culture of flexibility, shared responsibilities and mutual rewards.

Perhaps this highlights the crucial difference between collaboration in large and small organisations. The larger the system, the slower it can (re)act. In a government or higher education context, power and accountability adhere to a strict hierarchical structure, so the relationships and responsibilities necessary for successful collaborations have to be formalised from above. At SOTA, Arts Council Chair Liz Forgan noted that this often means that powerful institutions are behind the curve. For example, The Space, the digital collaboration that has been set up between ACE and the BBC, will arrive in summer 2012, long after the digital revolution has swept through the rest of the sector.

So far I have been referring to ‘collaboration’ in terms of arts management and policy, in which context it is commonly used to describe non-financial transactions. But within artistic processes, collaboration between individuals as artists, participants or audience members has a deeper and more political meaning, often related to a disavowal of authorship and/or a type of aesthetic transformation. When we talk of collaboration – as opposed to ‘entrepreneurialism’, for example – the arts sector is drawing something from its art historical meaning. My own practice, for example, embeds collaboration as the fabric and the purpose of the work. It is surely this artistic use of the word ‘collaboration’ that has bought the word its entry into institutional vocabulary.

I think of these differences between types of ‘collaboration’ as mirroring the differences between teaching and facilitation. Like collaboration between institutions, teaching is about a transfer of knowledge within pre-defined boundaries. Like collaboration in its more artistic use, facilitation means being prepared to change direction at any point. The most successful collaborations probably include a flavour of both. Last year I was working on ‘Encounter’, a programme of art in the public realm across three local authorities in Kent. The project was an institutional collaboration, a formal relationship between local governments. But it was also a personal collaboration between me and the arts development officers involved. At times it was clear that we did not share the same expectations and assumptions about the work. But, through a process of mutual facilitation – being prepared to listen, and change our minds – we ended up with a successful programme and stronger working relationships. It was collaboration in every sense of the word.