Wiltshire Council says it now knows asking for experienced, skilled and pre-vetted volunteers “was not the right approach”. 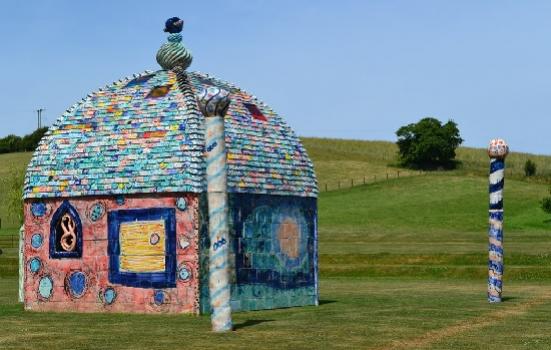 A local authority has withdrawn an advertisement for a volunteer community artist after it was criticised as “ridiculous”, “exploitative” and an insult to the profession.

Wiltshire Council acknowledged this as a mistake on Wednesday, issuing a statement from its Cabinet Member for Arts, Councillor Richard Clewer: “We now recognise asking for volunteers for this project was not the right approach and have withdrawn the advert to reconsider our options,” he said.

“It was never our intention to cause offence and we apologise for that.”

The advert for a volunteer – or volunteers – to deliver a five-month, multi-site schools outreach programme based around Tim Harrisson’s Silent Rhythm sculpture in Tisbury provoked outrage online. Among other qualities, the council sought applicants with a background of community work, “significant experience” in participatory arts practice, up-to-date DBS clearance and their own public liability insurance.

“Our expectation, subject to further discussions with the chosen artist/s, is up to three visits per school, one with the school cohort to Messums [art gallery] and two visits to the school to engage with the pupils. The project is to be delivered between March and July 2020 with the artist/s expected to deliver participatory sessions flexibly during this time. The artist/s will work closely with the Arts Lead and Community Engagement Manager to finalise the project delivery.”

Wiltshire musician Liv McLennan, who tweeted the listing earlier this week, said the council was contributing to the “feast or famine” lifestyles of many artists. The detail and complexity of the advertisement implied it was a job, not an unpaid role, she said.

“It also devalues community art in general and gives the perception that its just a hobby and a nice-to-do, rather than a legitimate form of work.”

Gill Simmons, Artistic Director of community arts company BraveBoldDrama, wrote online that a role of this nature would usually offer about £2000 in fees plus a materials budget, while researcher and community artist Dr Stephen Pritchard accused Wiltshire Council of “an incredible degree of unprofessionalism”.

On his blog, Pritchard said the advertisement exemplified “the increasingly commonplace substitution of properly paid work” for artists: “Clearly the requirements of this role are those of an experienced, professional community artist.

“Volunteering can be a very positive and mutually beneficial experience, but it must never be used as a trojan horse for worker exploitation and voluntarism. Community artists have struggled for professional recognition for many, many years and their work has been frequently undermined by the art world.”

When pressed on this, a Wiltshire Council spokesperson offered scant evidence of local support for a volunteer role, saying only that “the area’s local area board was keen to explore all options available for this project, including seeking voluntary support”.

The line between volunteering and employment is blurrier than it might first appear. ‘Volunteer’ as a term has no legal definition and while the obvious holds true – employees are paid and volunteers are not – volunteers can be considered employees under some circumstances.

The National Council for Voluntary Organisations (NCVO) says that any exchange of “something of value” for services delivered under a contract – written, verbal or otherwise – could construe employment, regardless of whether either party thinks they have a legally binding relationship.

‘Something of value’ can include regular reimbursement for expenses or non-essential training. Inflexible demands on a volunteer’s time can also indicate a worker/employee relationship.

Volunteers who can demonstrate that they are working under contract may be entitled to holiday and sick leave, protection from discrimination and unfair dismissal and the national living or minimum wage.

Though it is unlikely Wiltshire Council’s proposed role would have reached the threshold for employment, an NCVO spokesperson said it is “not normally reasonable” to expect volunteers to arrange their own insurance.