A chorus of dismay is growing in response to the deepening financial crisis facing many of the artistic and creative workers who form the largest part of the arts sector, and on whom the UK's arts infrastructure depends. 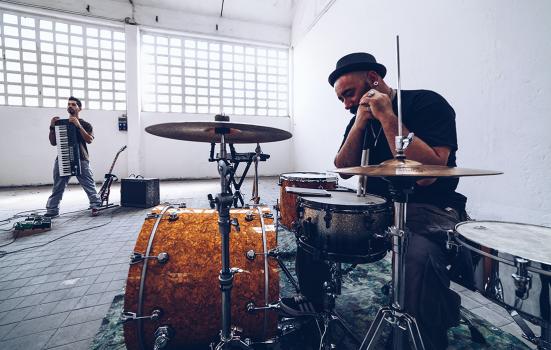 A 700-signature letter has been sent to Chancellor Rishi Sunak calling for action to address the dire situation facing many self employed workers in the cultural sector. At the same time, organisations receiving public funding have stepped forward to pledge their support for contractual workers, and are establishing a taskforce that will raise the voice of the self employed in conversations yet to come.

New figures published by the DCMS reveal the extent to which England's arts sector depends on self employed workers. Last year they accounted for almost three out of four jobs (72%) in the arts workforce - an occupation cluster that covers those working in artistic creation, the performing arts, support activities to the performing arts and the operation of arts facilities. Of the 250,000 roles in these occupations, 179,000 were taken by self-employed workers, while 72,000 were employed roles.

Among all other DCMS occupation clusters, it was only ‘design and designer fashion’ where there were more self-employed than employed workers - 60% of the 171,000-strong sector.

The figures are in stark contrast to the UK workforce as a whole, where only 1 out of every 5 workers was self employed last year.

The data also reveals the composition of the self-employed arts workforce, and indicate most likely pressure points among freelancers.

The new figures have been published as concerns continue to grow that financial support measures are already leaving many workers in the sector vulnerable, and the situation could be about to get worse. The Coronavirus Job Retention Scheme for employed workers is now due to run until October, but the Government has made no such commitment to self employed workers.

In response to announcement of the furlough extension for employees, over 700 people working in the arts have signed an open letter to Chancellor of the Exchequer Rishi Sunak, calling for the Government to recognise the very many other people working in the arts and cultural sector who are facing a huge loss of income yet are unable to access financial aid – a situation that will escalate rapidly unless steps are taken to extend the Self-Employment Income Support Scheme (SEISS) and plug the gaps in support through which many workers have already fallen.

Artists, authors, composers, producers, musicians, creative directors, trade union leaders, academics and many others have joined the chorus of dismay at the situation the facing the originators of much of the UK’s artistic and creative work. Their letter points out: “The arts and culture sector is vibrant and varied: our professions, skill sets, breadth of experience and circumstances are wonderfully and necessarily diverse. The sector relies upon the flexibility presented by self employment, and yet many of us remain unable to claim support.”

It goes on to list some of the groups at a particular disadvantage, including freelancers, but also those with mixed PAYE and self-employed status, workers who have recently left PAYE roles, and those who usually work a series of short-term PAYE contracts.

Angharad Cooper, the freelance producer and consultant who originated the letter with Assis Carreiro and others, told AP: “The extent to which the entire arts sector depends on the work of freelancers is crystal clear in the DCMS’s own figures. Given that the arts sector will be among the last to resume anything like normal activity again, there is a huge risk that the freelance workforce will simply disappear and the revival of our cultural sector is under serious threat. Hopefully the Chancellor can see now that the arts sector is a special case and will face irreparable damage unless this is recognised.”

Arts organisations large and small have also expressed their fears for freelance workers, and the impact their position will have on the wider sector.

An open letter, coordinated by Fuel Theatre, gives a “message of hope and solidarity” to self employed and freelance theatre workers – from actors and playwrights to stage crews, set-builders and many others. Signed by more than 50 organisations, the letter expresses support for them and outlines practical steps being taken to improve their situation.

This includes the establishment of a national task force of self-employed theatre and performance makers, which will aim to strengthen the influence of the self-employed theatre and performance community. The letter explains: “It would create ongoing points of connection between freelancers and organisations, and amplify the voice of the self-employed in the conversations to come.” Each of the organisations signing the letter will be supporting a freelancer to join the group, ensuring they are paid for their time.

Among the signatories is the Royal Shakespeare Company. Executive Director Catherine Mallyon told AP about their concerns.

“People are at the heart of our industry, talented specialists in a whole range of areas. 70% of those people are self-employed, skilled artists and specialist craftspeople, and the vast majority have lost all their trading or earned income. For many people this has already been devasting, for others the horizon looks bleak…

“For the industry we need to protect the gold standard in skills and craft that have made us the global success we are. We urgently need the SEISS to continue and be extended to include those with recent second jobs (PAYE, from which they are not eligible to be furloughed), and those who have taken parental or adoption leave and for the £50k cap to be reconsidered. These criteria are stopping legitimate and much-needed claims. Without this support freelancers will not be able to continue in the profession and their skills could be lost forever.

“The UK has led the way, with global influence, in ensuring the diversity of talent in all our communities has been represented on and off our stages, and freelancers have been a crucial part of this diversity. If support is not provided for freelancers, and if theatres are in prolonged crisis, these gains could be quickly lost, and voices historically under-represented for reasons of class, ethnic background, disability, would once again be excluded.”

Arts Council England has provided emergency funding for individuals as well as organisations, but its National Lottery Project Grants Scheme – accessible to those who don’t receive regular funding – has been suspended and ACE will be considering its next steps for supporting the sector as it enters what it describes as a “stabilisation phase”. Its survey to gather insights and data about the initial impact of the crisis on different parts of the cultural sector has now been completed, and a second survey, building on the findings from the first, is giving individuals and organisations a chance to say what their needs are now and in the future.

All very good points, but masking the true reality that the arts sector structures are based on an incredibly low paid workforce. Self employed arts workers obviously get no holiday or sick pay - which will be very important as this health crisis rumbles on & on. Whilst some people enjoy working across lots of different jobs, most would just like to remove the level of stress in merely paying their bills. It would be interested to understand if this is a function of all the funding cuts - I used to have a really great full time job til then, not brilliantly paid but now I work from home for around £50 a day, about half the income without 'benefits' or rights. Just saying!