More than 100 people and organisations have signed The Cultural Inclusion Manifesto, making an urgent plea for strategic partnerships between Special Educational Needs organisations and cultural institutions. 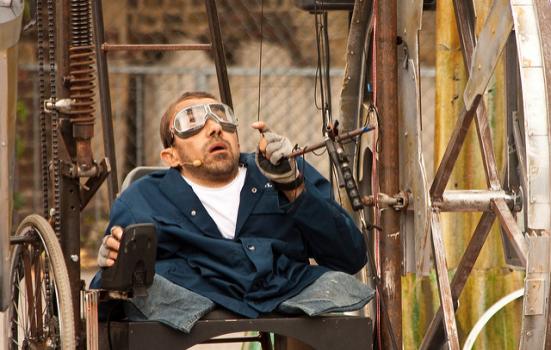 A performer in a show by Graeae, one of the manifesto signatories
Photo:

More than 100 arts organisations, MPs, charities and teachers have pledged their support for making the arts and education more inclusive for people with disabilities.

The Cultural Inclusion Manifesto celebrated its hundredth signatory this week, bringing together arts organisations such as Graeae and the National Gallery with stakeholders from across the political spectrum – including former Conservative Culture Secretary Maria Miller and Labour MP Sharon Hodgson.

The signatories stress that inclusion and participation are “essential to human dignity” and are committed to meeting at least once a year to develop opportunities for young people to access new cultural experiences.

The group also urges Arts Council England to develop a specific cultural inclusion strategy that would push for change and lend institutional support to the individuals and disability-focused organisations currently fighting for inclusion.

“Too often children and young people with disabilities, particularly learning disabilities, are excluded from full access to culture and arts,” a spokesperson for the project said.

“The general demise in access to the arts – both in school and in school visits to arts settings – compounds this exclusion.”

An event this week at the House of Commons, led by Hodgson, celebrated the manifesto’s 100th signatory.

While a spokesperson for the manifesto praised the “remarkable work” across the arts on improving inclusivity, they also highlighted a series of challenges that still face children and young people with disabilities. They said disability is “often the least developed” of approaches to access and inclusion in many cultural strategies; that reports on arts cuts rarely focus on the impact in special schools; and that career programmes do not usually inform young adults with significant learning difficulties about pathways in the arts.

The manifesto outlines a set of shared beliefs to drive and guide inclusive practice in the fields of education, art and culture. It says that:

Charities including CHEAD, The Council for Higher Education in Art & Design; Nasen, which fights for the advancement of all individuals with special educational needs; and Every Child Should have expressed support for the project.

Former Culture Minister Ed Vaizey, another manifesto signatory, said he was delighted to support partnerships between cultural organisations and SEN bodies “to ensure that enriching cultural experiences are available to all young people in the future.”

As well as calling for more individuals and organisations to sign the manifesto, the Cultural Inclusion Manifesto team identifies a “rare opportunity to build on Arts Council England’s (ACE) vision of arts for everyone” and calls for the funder to create a new inclusion strategy.

It recommends any such document consider the access of children and young people to the arts as students, consumers and makers of arts and culture; strengthen arts leadership; and consider whether grant making could be linked to an organisation’s disability inclusion practices.

Anita Kerwin-Nye, Director of Every Child Should, outlined why she thought such action was fundamental. In a version of a speech delivered as part of the Commons event, posted online, she said: “Addressing physical access, communication, costs and engagement for people with severe and complex physical and learning disabilities will improve access for all.”

She continued: “For all the progress that’s been made over these 35 years – and let’s be clear there are many great developments in anti-disabilism and disability rights – we are at a dangerous point.