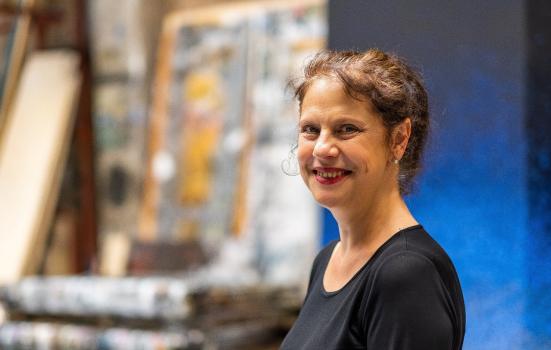 I went to drama school quite late, at 30, and did a year-long directing diploma at Drama Studio London. I left in the June with no idea what I was going to do or how I was going to progress, when Anna Furse, my movement teacher, became the Artistic Director of Paines Plough. She asked if I would like to be her assistant. Part of that was because of my previous career – I’d spent my twenties as a community arts officer, and Anna wanted an Assistant Director who could work on productions but could also do workshops.

I stayed on at the Court and became Associate Director. I would say the Royal Court for me was my formative period, where I learned my craft and did my first paid gig: Sweetheart by Nick Grosso at The RCT upstairs, with a young Kate Beckinsdale.

Literary Director at the Traverse Theatre (2001-04)

After a short period as a freelancer, I took on a role at the Traverse Theatre in Edinburgh. It was 2001 – I remember because I flew up on the day after 9/11. I was terrified on the plane.

I’d been appointed Literary Director, a role that combined Associate Director with Literary Manager. It was a brilliant time to be in Scotland because it was just when the Scottish Parliament was being formed and a whole new way of thinking about theatre was being ushered in. There was a real sense of empowerment, of taking control of the future. I guess I found my spiritual home in Scotland. People who work in theatre in Scotland love theatre, and there’s a great belief about the power of the artform as distinct from TV or film. Better still, it’s possible to work in theatre and have a life, which it isn’t in London. Working there is a bit like having a loose ensemble, because you work with people many times over the years and get to know them really well – and they get to know each other really well – and you end up with a sort of shorthand in rehearsal.

If the Royal Court was where I learned my craft, I felt like the Traverse was where I became the kind of director I wanted to be. It was the most extraordinary period. Ever since then I have continued to work quite closely with a few Scottish writers, and it’s often the style of work that I am most drawn to.

After Traverse, I took over Paines Plough as Artistic Director, almost 10 years since I had been an Assistant. That was probably the job I was happiest in ever. There’s something about having a small team… you’re kind of a family, and as an organisation, you’re very dextrous. A play can land on your desk and three months later you can be in rehearsal.

The fringe in London had always been an alternative space, but I felt at that time that it was considered a stepping stone and had lost its sense of experimentation. So we took over a fantastic warehouse in Shoreditch and turned it into a sort of party / gig / new work place. All of our work was done with no money – I remember when we went to Edinburgh I was in a single room, the writer and the producer shared a bed top to tail in another room, and the administrator was on an inflatable bed on the floor – and for some work we literally rehearsed in people’s front rooms, working day to day with whoever was around in the fringe.

But that’s the beauty of a company like Paines Plough. You can be incredibly nimble and incredibly cheap, but still produce incredible work.

Towards the end of my time at Paines Plough I went on to the Clore leadership programme. I suppose when I got to Paines Plough I felt like all my dreams had come true, because all I had ever wanted to do was work with new writing, and that role felt like the culmination of a whole phase of work that started when I went to the organisations as an Assistant Director. I didn’t know what I should do for the next 25 years.

Around then I was approached by the RSC to be an Associate Director, which I started part-time and then moved to full-time. I feel incredibly lucky to have learned how to direct new writing at the Royal Court, and how to approach Shakespeare at the RSC. When I did Richard III, RSC’s Artistic Director, Greg Doran, gave me a script that had been marked up for every Richard III that had ever been produced  as a gift. The access to the archives and the quality of the craftsmanship there was fantastic.

I’ve never had a five-year plan. I don’t believe in them. I’ve just done the thing that comes next. Once I’d worked with Shakespeare for the first time, I realised there was a whole world out there I hadn’t really experimented with, and I hadn’t had any experience with commercial theatre at all. When the Rep came up it felt like a place where I could bring all my disparate experiences together under one roof.

There’s a real focus on community work here. I love the scale of the stage, and the opportunity to do smaller work or great big commercial productions. And I just love being based in a building – they might be a little less nimble than companies, but I love the sense of home that they give to both staff and audiences.