As he opens the fifth British Ceramics Biennial, Barney Hare Duke tells us about his career, which started in the pottery studio. 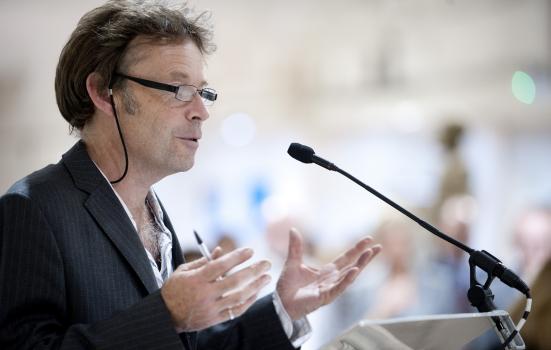 My interest in ceramics started at school. The ceramics studio was a great place for retreat and I had the run of the place. This experience was life-changing as it helped me to discover my passion for working with clay. I ended up doing some basic teaching at school in exchange for using all the materials I wanted.

Armed with a degree in sociology, I worked as a studio potter for some 15 years. During this time, I mixed the potting with some teaching and project work, and I was lucky to do some work for Bruce McLean, which was a revelation. His approach took me away from some of the restrained seriousness of studio pottery and I found myself propelled into a freer thinking realm.

I started following an arts management path because I was interested in extending my studio practice beyond objects to engaging with the world more widely.

My first arts management role was with a ceramics-based arts education company. Drawing on my early teaching experience, I was pleased to be able to be part of an initiative that was sharing the excitement and benefits of early encounters with clay.

When I saw the job advert for this arts council role, I thought it was a really interesting prospect; an exciting next step. At the time, craft was an under-represented art form and very much the poor relation in terms of funding.

The job was an advocacy role that involved fighting craft’s corner. I was lucky to be able to work with individuals in the sector, artists, start-ups and curatorial development rather than servicing large organisations. I found it immensely satisfying.

My big moments in the job were aligned with what was happening in the North West, and particularly in Manchester. The city was growing in confidence and reputation, both nationally and internationally. This kind of growth chimed very much with what I was trying to do with craft in the region, i.e. securing European Union and regular development funding, and aligning craft with the creative industries and international visual arts practice.

Together with my colleague Jeremy Theophilus, I set up A Fine Line: cultural practice. Building a portfolio of projects, A Fine Line has developed a specialism in international artists’ exchange programmes, working most regularly with partners in the Indian subcontinent. Through these programmes we have sought to facilitate a cultural dialogue which bridges art, heritage and the creative industries.

Jeremy and I were in India when we saw Stoke-on-Trent City Council’s advert for a feasibility study for a design festival in the city, which was part of a city-wide ambition for regeneration and transformation. We made our application from India and secured the job partially because our approach was very much from the outside.

When we presented the first British Ceramics Biennial (BCB) in 2009 we were completely unknown; it was more a statement of intent. Stoke-on-Trent was a recognised centre for ceramic manufacture, but one that was understood to be in decline. In 2009 we popped up in venues and we offered an experience of Stoke-on-Trent. We embarked on an idea of curating the city. Our ambition was to build the idea of the festival until at least 2013 and to make a case for its role in the city. We’ve established an identity that’s tied to where Stoke-on-Trent is up to now and I’m immensely proud of what we’ve achieved.

One of our big moments was bringing the BCB onto the former Spode factory site and opening up the magnificent China Hall as the main festival venue. It’s a challenging space to use, but it’s such an inspiring setting for both artists and visitors. I believe our use of the China Hall has been instrumental in revealing the potential of this cultural asset to the local authority.

We’ve just opened our fifth Biennial and we are working on the development of the 2017-21 programme, contributing to Stoke-on-Trent’s UK City of Culture bid. One of the best things about this job is being able to champion something that’s not in a crowded field. Commanding resources and attention, investing in and nurturing practitioners and their futures, aligning what we’re doing to regeneration objectives. Essentially, it’s the thrill of creating benefits to artists and to place and people.

The British Ceramics Biennial is taking place in Stoke-on-Trent until 5 November 2017.