What Banksy teaches us about art ownership

Think the elusive artist has automatic rights to their famous murals? It’s a bit more complicated than that. Jack Martin and Kate Johnson break it down. 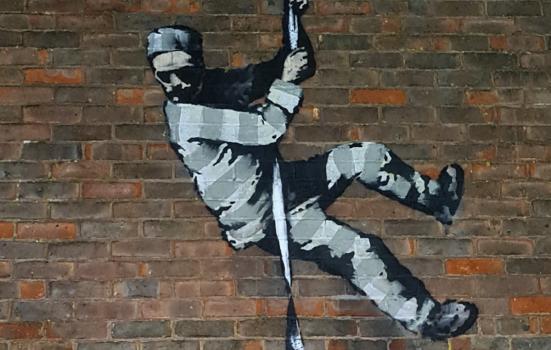 In law, land includes buildings and fixtures. Once something is painted on a wall, it becomes part of the land. A work created by Banksy on a wall belongs to the landowner.

That means Banksy’s painting of an escaping prisoner on the wall of Reading Gaol belongs to the Ministry of Justice. The ministry has not confirmed what will happen with the artwork but if it can be removed intact, they are free to do so – and sell it off. They could also remove it destructively, although as the piece has been valued at £300,000 to £400,000, this would seem an unlikely course of action.

A further option would be to simply leave the artwork in situ – where Banksy intended it to be. Steps to protect the artwork would certainly be required, as it has already been vandalized with the name of a rival artist. This was also the case for a Valentine's Day mural in Bristol that was defaced in spite of efforts to protect it. It’s no surprise then that many landowners opt to remove such artwork and sell it at auction, often to the frustration of local communities. Ultimately, the landowner is free to do as they see fit with their property.

Whose art is it anyway?

"Art Buff", a Banksy mural that appeared on an amusement arcade, is now being displayed in a public courtyard in Folkstone. Its removal sparked a ground-breaking legal dispute, The Creative Foundation v Dreamland Leisure Limited, whose main purpose was to determine ownership of an artwork created on land let to a tenant.

"Art Buff" was cut out of the arcade wall by the tenant, Dreamland Leisure, and sent to America to be auctioned at Art Basel Miami. The landlord, Creative Folkestone (known as The Creative Foundation at the time) sued for its return. Two questions were raised: whether it was reasonable for Dreamland Leisure to remove the artwork during essential repairs to the building; and whether the company still owned the artwork once it was removed.

The court were narrowly persuaded that Dreamland Leisure was complying with their obligation to repair the building, although it was not agreed that the removal was reasonable. But when it came to the ownership of the artwork the court held that, without a direct authority to deal with the issue, there should be a term in the lease stating the art became the landlord’s property when it was cut from the wall.

Four reasons were given for the decision. First, the default position is that every part of the property belongs to the landlord, and that the burden of proving otherwise falls on the tenant. Second, the fact that the tenant is repairing as required does not automatically mean it owns an artwork – only that they have permission to remove and possibly dispose of it.

Third, even if ownership is implied when someone is disposing of waste or chattels, it does not follow that there is ownership when those items are of substantial value. One of the judges determined that when the value arises from the actions of a third party – Banksy in this case – the landlord had more right to that windfall than the tenant. As a result, Dreamland Leisure was ordered to return “Art Buff” to Creative Folkestone.

Despite the artwork belonging to the landowner, some rights do remain with the artist. Since 2006, the UK has provided for artists’ resale rights (droit de suite). The artist or their heirs are entitled to part of the sale price up to €12,500 per item for a period of 70 years after the artist’s death. Banksy maintains anonymity and has never claimed for resale rights, but still could. If Banksy’s art is copied, then there is likely an infringement and the artist would be entitled to any profits. The catch? Having to give up anonymity.

Jack Martin is a Solicitor and Kate Johnson is a Senior Associate at Wedlake Bell.

What Banksy teaches us about art ownership