Turning Chester into a City of Art

Anastasia Tilston explains how a new community-led company in Chester is making space for artists in the city centre, with pop-up galleries stepping in to revive the declining retail offer. 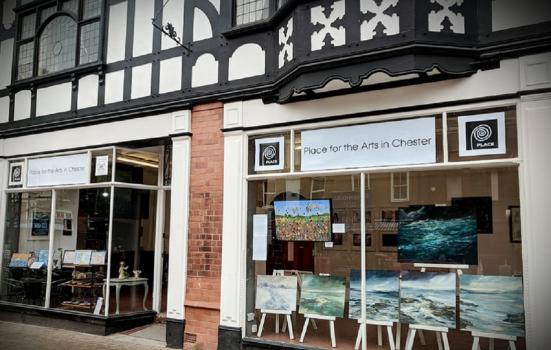 I could not believe what I had just heard. We have been waiting for this shop for nearly 8 months, and when we did not move in before Christmas last year, I decided to stop waiting and asked all the artists to stop waiting too. And when Covid-19 hit, it seemed most unlikely that we would get our pop-up gallery.

''…We just need to sign the lease and we can move in – you've got about a week to turn an old shop into a gallery space'', Tim continued. Ok. Boom! So it was happening.

The idea of pop-up galleries was born in 2018 when so many vacant shops appeared on Northgate street, right next to Chester Art Centre which I run. Back then, luckily for us, the Queen was due to visit Storyhouse, which is just up the road from us. So at first we got two empty shops that belonged to our landlord, the Cathedral, and then another shop let by Kenny Moore followed.

It all looked great for Her Majesty's visit and we thought it was fantastic to have 4 galleries on the same street creating an art trail.

But then the rates bill followed, which meant we had to pay thousands more than we had actually made from all the pop-up art sales commissions. And that was that. No more pop-ups, we thought.

However, good things happen to good people, as I like to say, and soon the community interest company Place for the Arts in Chester (PACh) was formed by four very professional and enthusiastic art supporters.

PACh worked out a legal mechanism by which pop-up galleries could be opened and operated, and Chester Art Centre was tasked with finding the artists and managing the pop-ups. This happened 18 months ago and all seemed incredibly promising, until...

Everyone thought the pop-ups were a great idea, but we could not get the premises. What could be more simple? The landlords of the empty high-street units don't have to worry about paying the rates or insurance for the shops that are bringing no money anyway, while a group of local artists comes in, makes the place look nice for the potential viewers, takes care of the bills and looks after the place. And yet it took 18 months to get the project going.

There are currently two pop-up galleries ‘Place 1’ and ‘Place 2’, run by 12 artists. Now they have opened their welcoming doors to the public, the goal of opening four more before Christmas seems achievable.

Like many others, Chester High Street has been in decline for quite a long time now. Although complaining feels great, we’d rather do what we can about the problems that arise.

So with the High Street empty and suffering, why not use this as an opportunity for the artists to showcase in the city centre, where they would be most unlikely to get a space if they had to pay full rent? So many exceptional, talented creators simply do not get a chance to show their work and get recognised, because usually artists have to already have a 'name' to get a show. Sharing a pop-up gallery space gives them an opportunity to sell their work to people who would have not even seen it otherwise.

At the same time, the city becomes more attractive to the visitors and people who live here.

It does come with its disadvantages, of course. If the landlord decides to sell or finds a paying tenant, we have to vacate the premises within two weeks, but these are conditions we cannot do anything about.

There is an outrageous shortage of studio spaces in Chester for artists to work in. We have managed to accommodate 5 artists at Chester Art Centre, but there are so many others who simply do not have anywhere to create their work. And if they don't create any, the world is definitely missing out.

So finding suitable premises for artists’ studios is another issue that PACh is going to address, and we are looking forward to a significantly increased art productivity once people actually have a place to work.

Putting art in empty windows is another avenue which we see. If a vacant shop cannot be turned into a pop-up gallery, there are usually no reasons why art could not be displayed in the windows. Establishing an outdoor gallery suggests yet another opportunity to showcase art and make the city look more vibrant and interesting.

We say 'Let's just turn Chester into the city of art'!

Turning Chester into a City of Art