Staging a Christmas show was a challenge that tested everyone’s limits. Joanna Read reflects on the year, from Covid to Christmas and beyond. 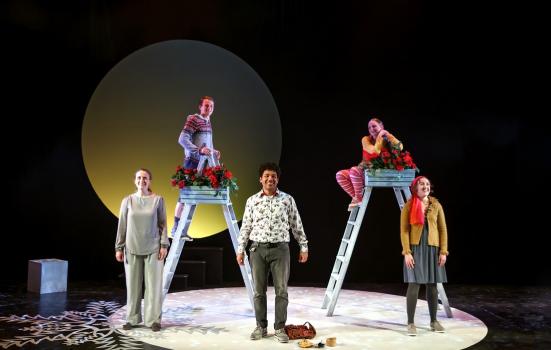 I began writing this piece in a break of the technical rehearsal for our Christmas production of The Snow Queen in December. It was a socially distanced tea break, so we were all sitting in different spaces around the theatre wearing masks, with our individual pots of hand sanitiser. I’d brought in my flask of coffee as we had closed the staff kitchen. Now I’m back at home, like the rest of my furloughed team, working through the implications of this third closure period from my kitchen table.

In less than a month we have opened a show, closed a show, filmed a show, and streamed a show. We’ve stood up and stood down our front of house team; we’ve welcomed back our audience and then sent them home again. It’s a pattern theatres across the country will be familiar with. Getting The Snow Queen on and then off again, with its accompanying trials and triumphs, summarises our year.

2020BC (before Covid), the Yvonne Arnaud was on an upward path. A much-loved theatre in need of some rejuvenation, we began last year with determination and grand plans. These included a summer festival, diversifying our programme, growing our audience, and returning to making our own work with a tour of Tim Firth’s Sheila’s Island. All were placed on hold in March when we went into the first lockdown.

Difficult decisions on staffing and resources were made early on in the pandemic. With the exception of critical support from our local authority, the theatre does not receive any funding. What we spend we must earn, and we wouldn’t survive without our box office, catering and ancillary income. Once we mourned the cancelled season, we focused on what we could do. Panto was an early casualty. It’s our biggest earner and our greatest risk; we couldn’t commit to those costs in July. Despite the roadmap fondly and often waved by the Culture Secretary, no one was certain a Christmas production of that scale would be sustainable. I got used to keeping three or more plans in motion at one time. Our box office and marketing teams got very good at accepting “I don’t know” as an informed update from the senior team, and then translating that into a coherent message to the public.

Audience on our mind

As we shuffled shows and cancelled performances, we tried to keep our connection with our stakeholders and audience. When we could open we did. We did it in short, sharp bursts to minimise risk, maximise furlough, always with one eye on the R rate.

Our usual receiving programme had been decimated; initially there was nothing to put on the stage. We reached out to local artists, partners and organisations all equally displaced by the pandemic and looking for a home. Large-scale touring drama was replaced by script-in-hand performances, lectures, films and music. Summer plans solidified into socially-distanced jazz and comedy in the garden, autumn into revue and cabaret, a visit from Mischief Theatre and hosting the Guildford Book Festival. We were back indoors by this point in a reconfigured, socially-distanced auditorium. We made it work by sharing the box office income and stretching the staff we had to cover front and back of stage. The Finance Director tore tickets, the Marketing Director checked temperatures, the IT Manager crewed the show and I worked the bar.

Our staff wanted this to work. They have worked flexibly, learnt new skills, and problem solved at every stage to keep us going. Most of all, whenever it’s been safe, sensible and cost effective to do so, we have tried to open and give us the lift that has kept us going. Any time it was possible for an audience or community group to be in the building, they were. The strength of the emotional reaction from them - the joy, delight and the thanks - has been an immense reward.

Arriving at Christmas, it became important to make our own show if we could. We wanted to offer what work we could to freelance artists and give cheer to our audience and local community. I took the decision as late as possible and kept the run short. Producing it ourselves gave us control in case anything changed, as well as the opportunity to play to our strengths and resources. It also gave us some content that we could offer digitally. We filmed and streamed the show, a first for this theatre and something we wouldn’t have had the nerve to attempt before the pandemic. Artistic choices were determined by cost and experience: a small cast, an in-house team, and a robust, proven script that relied on storytelling and did not need elaborate set and costumes.

We were able to produce The Snow Queen in December because the sudden and sometimes contradictory changes in Government advice have taught us to be deft, fleet of foot, and to keep things local. We’ve become comfortable taking calculated risks, keeping costs low, and using the talents and resources we have to hand. We got to grips with being Covid-secure early on, both indoors and out, so by the time we had to marshal 250 families for The Snow Queen we were confident we could manage this safely.

It has not all been great. The year has, at moments, been brutal. Our staff reduced from 34 to 14, our outreach programme was suspended, our kit and equipment started crumbling from lack of use in an old, unoccupied building that’s slowly deteriorating. I’m sure I’m not the only executive who went home and had a quiet cry some days. However, there have been many surprising highlights. A call-out for volunteers resulted in 70 applications to become ushers. A local volunteer group tidied the garden when weeds threatened to overtake it and we couldn’t afford to un-furlough our staff. So many audience members have said “keep it” when we offered the first of many refunds. We’ve opened tiny, hand-addressed envelopes to ‘The Manager’ to find unsolicited donations.

Looking forward I have to be honest that things will remain hard. A dark theatre has no purpose and this dark period will need to be the longest yet as energies must be focussed elsewhere. Essential local funding is under threat as budgets are sucked dry by Covid-19. But last year we demonstrated how vital we were and how much the community needed and wanted to be with us, to experience that imaginative and emotional engagement that only art gives you. Organisations in our region have shared information, lent kit and advice when needed, and supported and promoted each other’s work. An audience for one is an audience for all.

At the very least, we are still here. We know if we are deft, clever, and little bit lucky then we will come out of this a resilient organisation, more comfortable with change, and in stronger communication with our audience and stakeholders. Many tasks that seemed daunting before Covid are now being tackled with determination, if not with ease. Our responsibility is to our audience and our priority is to our staff. The best that we can do is to ensure the theatre weathers this period to be here for others in the future. If this means shelving ambitions and projects for a while so be it: we will be back. We plan to keep producing locally and nationally, we have new partners to work with who have brought new elements to our programme and a new audience. And as for The Snow Queen, which closed prematurely in December, “bring it back next year” someone emailed. I’d love to, but I’ve got a theatre to reopen again, and a panto and a tour to make.