The opportunities for using virtual and augmented reality in the arts are immense, but realising them is no trivial matter, says Rebecca Gregory-Clarke. 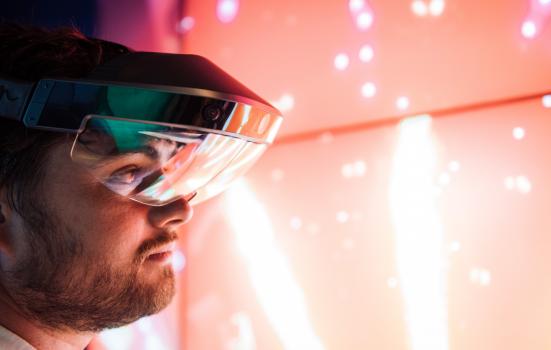 Like many other technologies, the use of virtual and augmented reality (VR/AR) has accelerated in a big way over the last few years, and the arts and cultural sector has been at the forefront of this exciting, experimental stage.

What if you could livestream a dance performance into every train station in Europe at the same time?

Although VR has actually been around for some time, recent advances in display and production technology have meant that it is no longer confined to academic laboratories. More creators than ever are now able to get their hands on the tools needed to make this content, democratising the technology in a way not seen before.

For the arts sector, the potential is enormous, not least because it is home to some of the best creative skills, assets and venues that lie at the core of many would-be experiences. For some, VR represents an entirely new medium in its own right that allows stories to be told in fundamentally new ways. For others, VR represents an opportunity to further expand the reach of performances or exhibitions to brand new audiences.

However, while the opportunities are immense, they are not trivial to realise.

In March this year, Digital Catapult and Arts Council England held the inaugural showcase event for CreativeXR, a seed-funding and support programme designed to help boost the immersive content-making ecosystem in the UK.

The programme culminated in a day-long marketplace to connect the 20 teams and their prototypes with a host of potential commissioners, financiers, exhibitors and distributors. The creativity and enthusiasm of the teams and all those attending was palpable, and the day turned out to be a brilliant showcase of UK talent of which we were very proud.

Nonetheless, the difficulties in putting together an event of this nature, which aimed to bring together all the vital constituent parts of a fragmented ecosystem, really served to highlight how much work is still needed to pull these elements together and allow the sector to thrive.

Distribution opportunities for VR are a challenge throughout the emerging immersive sector, as the in-home uptake of devices has been slower than some of the early predictions. But this represents an opportunity for cultural organisations with a physical presence and significant footfall to play a key role in reaching the masses, allowing the public to have their first taste of VR or AR in a curated, controlled setting, and reaching people in a place where they already want to be. This opportunity also plays well into the increasing appetite for ‘location-based’ immersive experiences such as Secret Cinema or escape rooms.

The constantly changing state of the technology is also a challenge for the artists and technologists and for the organisations that wish to work with them. But it’s important to take a long-term view of this and not get too hung up on the devices we see today. None of the headsets on the market right now will be what we buy or use in ten years’ time, but they are a crucial stepping stone to getting there. The techniques and tools we are developing now will be directly applicable to those we will use to consume media in the future, whatever they may look like.

VR and AR are often lumped in together as ‘immersive technologies’ and indeed they have a lot in common, as they both sit along a spectrum of merging real and virtual elements together. However, there are important differences that make them more or less suitable for certain types of content:

Put another way, if VR can help bring a museum experience into your home, could AR take the museum out into the world?

VR and AR will force us to look at new ways of defining cultural and social experiences, and the arts sector is in an important position to help push these boundaries. What if your whole world was a blank canvas to build upon? What would happen if somebody could add virtual street art to the outside of the Houses of Parliament? What if you could livestream a dance performance into every train station in Europe at the same time? What would it take to pull this off and what would the ethical implications be?

We have yet to fully realise these opportunities, but the earlier that arts organisations and individuals get involved, the greater opportunity they have to influence the direction of travel of both the content and the technology itself. It’s a challenge, but it’s an exciting one.