My Gurus: Putting the business in showbusiness

Theatre producer Hannah Elsy reflects on the people who taught her to focus on the details without forgetting the big picture. 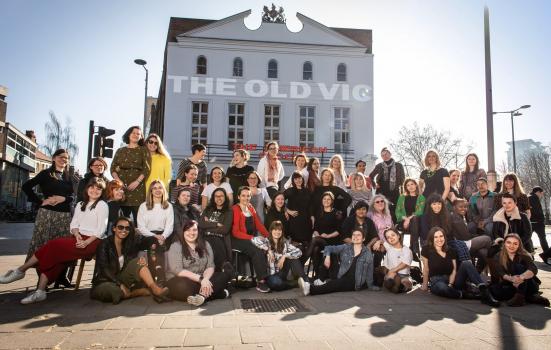 "I am a better producer for my time there": Female staff gather outside the Old Vic

Mary and Stuart run the Playbox Theatre in Warwick, a flagship youth theatre in the West Midlands that I attended from the ages of 4 to 18. Training and performing at Playbox was formative for me as a person and a maker of theatre. I trained in theatre craft including Shakespeare, lighting for stage, text and voice. I performed in Pink Floyd’s ‘The Wall’, ‘A Midsummer Night’s Dream’, ‘Cinderella’ and many more. The ethos of Playbox is "Energy, Enthusiasm and Passion”. Combined with an uncompromising serving of tough love, this leads to the high standards of shows that Playbox is known for. This ethos is still how I try to approach my work today. When rehearsing for productions and not called to be on stage, we were always encouraged to sit in the auditorium and watch everyone else work. That’s where I gained my knowledge of all the moving components of a production, and how they interlink to make theatrical magic.

Playbox has an impressive list of alums: Sophie Turner, Josh McGuire, Calum Finlay to name a few. This is a testament to exceptional quality of training they provide!

Chris was former Head of International Licensing at Cameron Mackintosh Limited and now runs Producer’s Pool, a networking event for theatre producers. Chris is a champion of producers, online and offline, which is something I believe is sorely needed: the producer is often painted as the ‘bad guy’ and kicked around a lot in the press and on social media. Chris will always play devil’s advocate when needed. He has given me some brilliant career surgeries over the years and has really helped to steer me towards becoming a producer who works in both the for-profit commercial sector and not-for-profit subsidised sector. His industry knowledge has helped more than once when I’ve been in a tight spot with a negotiation.

We share a belief in simple solutions being the best solutions

The staff at The Old Vic

I’ve worked for the Old Vic for a year and a half now, as a freelancer, and an employee. I love the fact that the Old Vic receives no regular public subsidy and still manages to put on fantastic and lavish productions. It is working to make the popular artistic and the artistic popular, and straddles both the commercial and the subsidised sectors - an approach I apply to my producing business. The drive, expertise and commitment from all departments that goes into making productions happen is incredible. On quite a few occasions I have asked a staff member with a specialist skill to teach me how to do something for one of my productions – not as part of my work for the Old Vic – and they have generously shared their knowledge. I am a better producer for my time there.

Ronia is one of two non-theatre people in this list. She is a communications expert who runs her own business, Spoken Business Communications Limited, and has been mentoring me for a few years. She is an incredible woman who was trained in how to communicate by the army. She uses that training to teach me how to present my ideas clearly, express them in writing and navigate complicated conversations. Ronia inspires me because she is a businesswoman – I see myself firstly as a businesswoman and secondly as a producer – and because we share a belief in simple solutions being the best solutions. She is a master of clarity of thought and speech, and I find her training helpful when I’m proposing deals to a funder or collaborator.

Finally, and I know this is cliché – it’s my dad! He’s had a really impressive 40-year career in the engineering and automotive industries, working at Land Rover and Jaguar, running a company called Torotrak that developed new gearbox technology and most recently leading an initiative called the High Value Manufacturing Catapult, which uses public and private money to develop new engineering and manufacturing ideas in the UK. He’s a guru because he is always sure to remind me of the bigger picture when I’m working on a show and encourages me not to get too worried about the little things – which can be easy to do when you are managing the minutiae of a production! I often compare showbusiness to other forms of business and I’m inspired to draw from traditional business practices in my work. I think this is partly down to the influence of my dad.

My Gurus: Putting the business in showbusiness