At the start of their careers, artists need more than just brilliant ideas - they need to develop skills that will enable them to shape and sustain their practice. Ann Drew explains how applying for an enterprise award can help them achieve this. 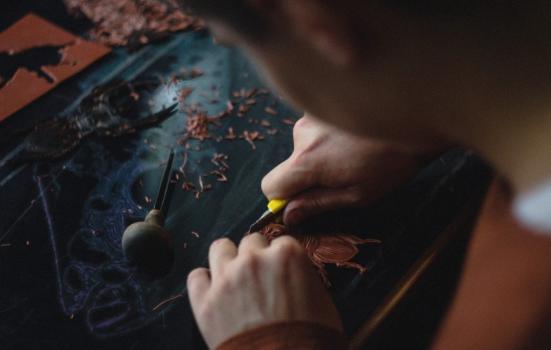 Arts graduates increasingly have to create their own jobs, build their own careers, and be as creative about making a living. A brilliant idea is nothing without a thoroughly robust business or project plan. The idea is just the start of the journey. Finding funding will be a challenge, but will be almost impossible without a convincing case that considers the audience/market, financial planning, management requirements and sustainability of an initiative.

To support the growth and development of individuals and organisations within the sector, Deutsche Bank is working with the Arts & Culture team at Business in the Community to extend access to business expertise and financing. The Deutsche Bank Awards for Creative Enterprises (DBACE) are a key part of this. Established in 1993, and covering five artform categories - arts and photography, craft and design, film, music, and performance - the awards have helped establish more than 175 projects and businesses, advised 2,400 students with their business planning, and donated £1.5m to support graduating art students at a critical point in their careers.

The process begins with a university faculty registering with the Awards. Final year arts students and those graduating the previous year can apply. Workshops and one-to-one advice sessions support students with their business or project plans for their applications. Michael Tougher, a graduate of the Glasgow School of art and a winner in 2015 said: “The process of writing a business plan itself was incredibly useful. It helps you understand exactly what you want to do and helps you communicate your plans effectively.  It also gets you to answer hard questions that you have not thought about, including marketing and finance.”

Those shortlisted are invited to pitch to a panel of Deutsche Bank executives and arts professionals, with winners announced at the end of the day. Award winners receive £10,000 each and a further £1,000 goes to runners-up in each category.  Both winners and runners-up receive year-long business mentoring and two days of intensive small business training. The training and mentoring is important. The Institute for Public Policy Research reported earlier this year that only 9% of self-employed workers were receiving training in 2012 compared to 17% of employees and observed: “Difficulty accessing training may have knock-on effects on the ability of new owners to grow and develop their company, critical to the contribution of entrepreneurship to economic growth.” The mentoring programme is led by the bank’s senior staff. Stephen Willey, a graduate of the Birmingham Conservatoire and Director of Etch, creators of bespoke music, who won the music category in 2013, found that “whilst funding has been a huge help, the mentoring has been invaluable.”

The money can be used in whatever way the students choose to support their plan. Simione Lia, a graduate of the Royal College of Art, won the Design category in 2001. With Tom Gauld, she published comics under the name Cabanon Press. The prize paid for their initial print production, studio equipment and enabled them to take studio space before leaving college. They have both gone on to grow flourishing careers. Tom has had a strip in The Guardian for more than 10 years and Simione’s comic stories were picked up by Jonathan Cape.

Winners have shown that they not only have the ideas, but also the tenacity and adaptability to survive in an insecure environment. They build strong networks, listen to others and really understand what they can offer to the industry. Their personality and approach often comes through in their applications. One of the earliest winners in 1993, Orlando Jopling, launched a small music festival celebrating some little known works of Bela Bartok. He now runs Roman River Music, a 25-concert, three week annual festival in coastal Essex.

For artists the Awards offer not only financial and business support but also a prominent showcase. Standing alongside the works of Anish Kapoor and Damien Hirst in Deutsche Bank’s outstanding art collection are works from many former DBACE winners who are now established, including, Matthew Darbyshire, Diana Matar, Daro Montag, Danielle Mourning, Ann Mulrooney, Andrew Parker, Tome Saunderson and Anastasia Taylor-Lind to name a few.

The Award process is confidence-building, nurtures entrepreneurial ambition and helps transform ideas into long-term achievement. James Gilchrist and Beth Wilson, graduates of Edinburgh College of Art and winners in 2014, launched Scotland’s first graphic design festival, Graphic Design Festival Scotland (GDFS) alongside their own independent creative practice, Warriors Studio.  They conclude; “Winning DBACE made launching our business and GDFS not only possible but allowed us to do it successfully.”

Ann Drew is Director, Culture at Business in the Community.
www.bitc.org.uk