Edinburgh in a wheelchair 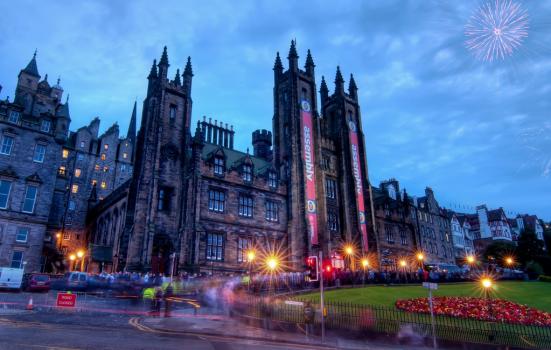 I love the Edinburgh Festival Fringe. It has been a major part of my cultural and professional life since the early 1980s. It’s featured in every job I have undertaken: student performer, talent scout, TV producer, arts funder, venue programmer and theatre executive. I’ve experienced hundreds of extraordinary performances, I’ve produced shows, run venues, booked many acts and made lifelong friends. But every year it gets slightly harder for me as a wheelchair user due to poor access.

To compound the issues, in some fully accessible venues, I am often allocated the worst seat in the house with partial stage views

Yet this year, I was delighted to see more disabled people in audiences as well as more disabled performers than ever before. According to Edinburgh’s Fringe Society, there was a 22% increase in access ticket transactions during the 2017 Fringe, suggesting there is significant demand from disabled people to engage with the festival. The number of accessible performances (relaxed, BSL, audio described or captioned) offered by venues went up by over 60% too.

This encouraging news is tempered by the fact that only 56% of the 300 venues offer wheelchair access and only 40% of their spaces are actually wheelchair accessible. This highlights one of Edinburgh’s problems: what might look accessible from the outside, simply isn’t in reality.

Topographically, Edinburgh poses a challenge to everyone. It’s an old city built around an extinct volcano, full of cobbled streets that aren’t easy to get around. Indeed, its very inaccessibility is part of the attraction. For me it’s like an annual high-adrenalin adventure sport, but even as a fully independent and robust individual, this year it nearly beat me.

Back in the 1980s, I was virtually the only wheelchair user on the Fringe. Few venues were accessible but there was a real determination to get audiences in. The ‘spirit of the Fringe’ ruled and a team of burly students were always on hand to cart me up and down the steepest of stairs.

But at the turn of the century, this improvised approach inevitably came to its end as health and safety legislation started to be applied. If I couldn’t get myself in and out of a venue independently, access was denied. Hand in hand with this restriction, the Disability Discrimination Act decreed that “reasonable adjustment” had to be made by all service providers to provide access. But in practice at Edinburgh, this only meant that already accessible venues could be reasonably adjusted.

Progress to make the festivals more accessible was slow. The Edinburgh International Festival led the way with a dedicated access booking line and complimentary PA ticket system established back in the 1990s. Exhaustive access booklets detailing everything from availability of adapted loos to parking were also pioneered. The refurbishments of the Usher Hall and Festival Theatre created blueprints for excellence in venue access. Yet sightlines for wheelchair seats in the King’s and Royal Lyceum Theatres remain dreadful.

Under former Chief Executive Kath Mainland, the Fringe followed suit and it now places ever greater priority on accessibility. The Fringe Arts Industry Office does its very best to ensure I attend the shows I wish to see. But there are always a good number of performances annually I can’t access, meaning I cannot book their artists.

The Fringe is a constantly evolving juggernaut and its heart has now shifted to the George and Bristo Squares complex where the ‘big four’ venues sit – Underbelly, Assembly, Pleasance and Gilded Balloon, close by to Pleasance Courtyard and Summerhall.

I get frustrated that the big four, which present many of the industry-focused shows that are my professional currency, still have unacceptably high numbers of inaccessible venues – six at Assembly and all of Underbelly’s Cowgate. Going against the tide of ever greater accessibility, I found it bizarre and disappointing that the Gilded Balloon (which is mainly accessible) took on the fully inaccessible Rose Street venue this year, adding to the number of shows I could not see.

To compound the issues, in some fully accessible venues, I am often allocated the worst seat in the house with partial stage views. Venues need to apply further thought to enhance disabled audiences’ experience of their productions. Otherwise, what is the point of all the costly access?

Getting to the venues is also a major struggle. George Square, like much of the city is accessed by horribly cracked pavements and wrecked cobbled streets with no smooth access routes. One slip-up on any of these unsafe surfaces could risk broken bones for me and perhaps months out of action. I simply couldn’t navigate George Square alone and was lucky that my partner was willing to act as PA, but I spent as much time scanning for monster cracks in pavements as I did watching shows.

Furthermore, now that the George/Bristo Square complex has been closed to all traffic, there are only two blue badge parking spaces to serve a massive combined venue capacity of over 6,000 – totally inadequate to enable disabled audiences access to this vital area. There’s no blue badge parking adjacent to Pleasance Courtyard or Summerhall either. Temporary taxi ranks are established across the city annually, so surely the same approach can be applied to blue badge parking?

Put simply, the city’s creaking infrastructure isn’t moving fast enough to keep up with the demands of the festival and its diversifying audiences. Edinburgh as a premier international cultural destination needs to take a holistic, audience-focused approach to improving access by bringing together all the key stakeholders.

The University of Edinburgh is landlord to the big four and a major player in the success of the Fringe. It has made access improvements to Bristo Square, but now needs to radically improve the streetscape of George Square to enhance access to this major Fringe centre. I can’t imagine how their own disabled students cope with the terrain.

For me, this year’s festival celebrated diversity at its best with amazing performances by incredibly skilled artists such as those by my fellow Changemakers Javaad Alipoor and Jess Thom. But without radical shifts in attitude and infrastructure, Edinburgh will soon feel like an alien environment that I can no longer operate in. And after 35 years in the thick of it, that would be a tragedy for me and a huge dis-service to the increasing number of disabled people that wish to sample the magic of the Edinburgh Festival Fringe.

It isn't just that “the city’s creaking infrastructure isn’t moving fast enough to keep up with the demands of the festival and its diversifying audiences”. Edinburgh: the city centre, the old town, the new town, the West End. It's all covered by a series of conservation zones. Edinburgh Council gives guidance on how to balance the “reasonable” steps to make buildings and services accessible, against the statutory duty to protect the character of the historic environment. A balance that places the character of the building, the retention of historic doors over full access for everyone via the principal entrance. A balance where the placement of a ramp is weighed against “the symmetry of existing elevations and the rhythm of the street”; “the relationship between railings, property and basement”. A balance that seeks to protect the environment from the visual intrusion of handrails, textured flooring, visual safety indicators, external chair and platform lifts. Wheelchair users and others with disabilities are being denied safe and equal access to Edinburgh so that the historic environment can be conserved and enjoyed by those who can access it.
My first venture towards the Festival Village was completely blocked by wheely bins. Moving them from my wheelchair was a challenge to say the least. Thankfully they were empty but had they been full then that would have been another matter. Worse than that though, trying to access the 'Accessible' toilet there, I discovered that the nationally recognised 'Radar' key system was not the order of the day. I had to get a member of staff to get a key to gain entry - even they had to go hunting... Not only that, I also noticed that there wasn't always staff around to be able to 'help out'. Some very basic joined up thinking around access, wouldn't go amiss. If in doubt, ask some disabled people about 'fitness-for-purpose' re access and you might get closer to the right answers.

How to remain inclusive while living with Covid
The Other Side: resetting the dial for inclusion
No access, no public funding?
Will the Change Makers make a difference?
Edinburgh in a wheelchair
Still dismal times for disability
My experience at Theatre 2016
Untransformed attitudes