What are the dynamics when a group of artists with and without learning disabilities work together? Emma Bosworth discusses the positive outcomes of the OutsiderXchanges project. 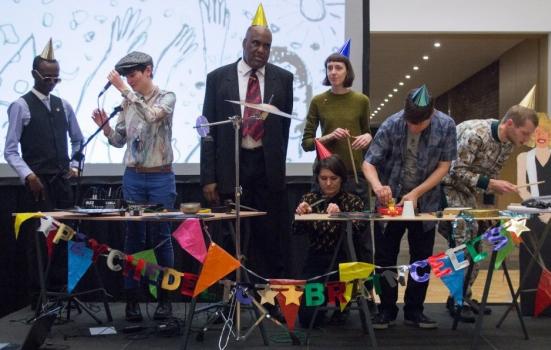 OutsiderXchanges was a visual arts project that aimed to break down barriers, and challenge the concepts surrounding ‘outsider’ art. With over 25 years’ experience of working with learning disabled artists, Venture Arts led the project in partnership with Castlefield Gallery in Manchester, and BALTIC Centre for Contemporary Art.

“Learning-disabled artists still face significant barriers to entering the art world, but through this way of working all artists benefited and saw their practice develop”

The project was launched last year with 12 emerging talents, six of whom were learning-disabled artists. The artists were given an open studio to create freely in for over nine months. Ten of them were based in Manchester, in a space provided by Castlefield Gallery, and two others in Newcastle at BALTIC 39.

Open dialogue was established from the start. Describing an early activity involving old records being broken and reconstructed, artist Rosanne Robertson said: “It felt good to get out of 2D and into space – interacting with objects and each other. A theme of ‘play’ was developing in the studio at this stage and many others joined in with their own additions to the improvisation going on.”

This led to a series of visual conversations with artists working side by side on individual art work, interacting with found objects and open canvases to build ideas and shared experiences. The floors, tables and walls of the studio space were always an explosion of colour, cuttings, writings, found, broken and bought objects, sketches, fabrics and much more.

Artist Sophie Lee said about their shared narrative and mutual fascination with identity: “Through conversation common ground was quickly established between Horace, Juliet and myself. It has been interesting to discuss our shared interest in schools, childhood and our relationship to architecture, but particularly exciting exploring our different approaches in how to communicate these ideas.”

The three artists built on this while working together on ‘I was the Assembly Hall’, an intriguing video installation and performance piece that reconstructs childhood memories.

When asked specifically about how it was to work with artists with learning disabilities, Rosanne said: “The main difference has been the level of dedication and concentration demonstrated by the artists with learning disabilities. All of them are less afraid of being themselves with their work – they work with more honesty than you will find in more mainstream art worlds. I would like to be part of an art world that has made room for this honesty and is more accessible and inclusive.”

Rosanne collaborated with Barry Anthony Finan on ‘Yes Lad, Yes Lass’, a poignant mixed media installation in which both artists lay bare their ambitions in video dialogues that, as Rosanne says, “stands like two bodies of work facing each other in conversation”.

All the work was exhibited at the Manchester Contemporary art fair, the BALTIC and at a Thursday late event at the Whitworth Art Gallery in Manchester, where we hosted a one off ‘art party’ that brought forth the shared lived experiences of all the studio artists in a gallery setting and to great effect.

The art that was exhibited, although being grounded in individual interests, experiences and practice, shared themes of self-identity, memory and conversation, and in extension the relationship between the artist and their art. This blurred line between art and life encouraged the viewer to question their own conceptions of what art is, and what might be considered ‘outsider’ art.

From a learning disability perspective, dialogue and the associated concepts around language and communication can be varied and diverse. Showing the process was a key part of inviting the viewer to participate in the art, breaking down their own barriers and pre-conceptions, and helping to open up the conversation with artists with learning disabilities.

OutsiderXchanges, in its first manifestation, has now come to an end but the conversations it inspired have just begun. We have already acquired an additional studio where diverse artists can continue to work side by side. The intention is to continue these fascinating dialogues through a series of ongoing ‘Conversations’, developing visual, spoken and conceptual language and building cumulative work that investigates relationships between people, language and art.

Amanda Sutton, Director of Venture Arts, said: “The project was brilliant in that it was based on genuine equal exchange between diverse artists. Learning-disabled artists still face significant barriers to entering the art world, but through this way of working all artists benefited and saw their practice develop. It really feels like an exciting beginning, an interesting new way of working, in effect the start of an experiment that could have real potential in the future.”