People who 'don't do arts stuff' can't be expected to come to an arts event just because it's free, family-friendly and fun. TC Peppercorn explains why. 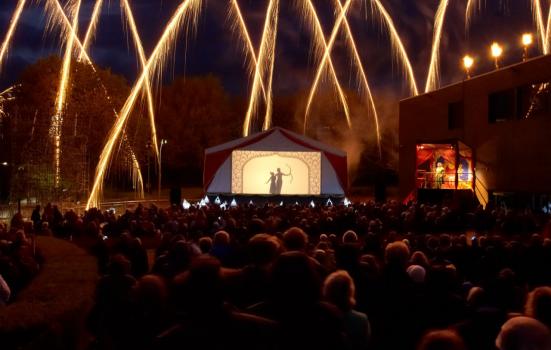 Public Art. It’s such a worthy concept that it merits capitalisation. It makes my heart beat faster because it ticks every box I hold dear like equality, accessibility, freedom, enjoyment and smashing the prevailing elitist cultural system of Britain.

But let’s back off a little before I get too heavy. I was raised on the belief that going to galleries, museums, the theatre, reading books and learning poetry was just stuff that ordinary people like us did. I’ve raised my kids the same way, not least because galleries and libraries are free and they tend to have nice cafes and are a peaceful refuge on a rainy afternoon. Yet what do we get for this? We get called ‘posh’, that curiously derogatory term which speaks of money, property and ponies. None of which I have ever had incidentally. It seems that taking an interest in the arts and culture is considered by many as something for people who think they are better than everyone else. Which baffles me.

Despite leaflet drops and a broad media campaign, those who just didn’t come to arts stuff still didn’t come

I work now in an arts centre and endeavour to get non-arts audiences to engage in what we have to offer. In the depths of Worcestershire, with Birmingham and Stratford equidistant, it is a constant challenge. I never understood why people wouldn’t try something new, particularly when I was offering a children’s workshop or a free ticket. But humans are creatures of habit. It’s very hard to get them to step outside their comfort zone. A wise person once asked me whether I would attend a football match if I was offered a free ticket. I thought for a moment and said no. She then smiled as I saw the parallel in what I was trying to do with arts audiences. “But they might enjoy it!” I wailed, still convinced. She was tactful enough not to labour the point by replying “...and so might you”.

But I think it goes deeper than simply being afraid or reluctant to try something new and different. I recently took part in a research project into contemporary arts audiences and their responses, and was able to visit some events and galleries with which I was unfamiliar. All of them incidentally were Arts Council England National Portfolio Organisations or had recently benefited from significant support. These visits and my experiences got me thinking: do arts organisations always want to attract those non-arts audiences? I noted that two of the organisations seemed to be deliberately shutting out those visitors that weren’t right for the venue, that weren’t ‘insiders’ or members of the cognoscenti. Their street-front signage gave little away and once inside, interpretation was patchy, despite having apparently well-developed community engagement programmes. It surprised me, someone quite obviously engaged in the arts, how alienated I felt. In the first venue, I spent a long time trying to get a sense of what was being communicated, trying to uncover the engagement aspect with no success. By the time I got to the second venue, I was so disillusioned that I whizzed round, dismissed the whole thing as navel-gazing rubbish and left. Both were visual arts establishments and as a visual arts specialist, I was horrified. I felt angry first at myself and then, with gradually dawning realisation, at the two galleries. Were they actually preaching to the converted? Had they given up the good fight of making arts accessible to all? Might it be that the process of engaging audiences with no background knowledge of the arts, particularly abstract and challenging images, changes the creative process? By explaining what’s going on, does one allow the magical art dust to escape, rendering the mystery null and void?

Now, I firmly believe that the arts should never be dumbed down either for children or for non-arts audiences but is it actually too much to ask that someone with no knowledge (or interest) in a contemporary or challenging artform should be expected to engage in it willingly and even to benefit from it? I consider the stuff that I love: abstract art, contemporary dance and issue-based theatre (the tricky stuff). I wonder just how realistic it is to expect folks to try it out when they may be afraid of even entering an arts space in case they say something daft or clap in the wrong places.

So if certain arts organisations appear to be deliberately discouraging these new audiences, how do those of us with good public art intentions engage them?

Recently, it has come to light that free open-air arts events are likely to attract new audiences. Artrix, the venue where I work, celebrates its tenth anniversary this year, and as part of the celebrations we recently staged a large-scale open-air performance of Spellbound by outdoor performance specialists Walk the Plank. It’s a version of the Hindu Ramayana story played out through dance, storytelling and spectacular pyrotechnics. We hoped it would attract some of those people who have yet to visit us. It was free, accessible, family-friendly and had fireworks. While it drew our largest ever audience for a single event, many of those new to the venue had come via the engagement programme of a community lantern parade along with their children. Despite leaflet drops and a broad media campaign, those who just didn’t come to arts stuff still didn’t come. Interestingly, I heard a few comments that an Indian story didn’t have anything to offer our predominantly white community and they couldn’t understand why we were celebrating Diwali. I tentatively asked if it mattered where a good story or show comes from if it’s got music, dancing, fireworks and it’s free. I don’t think they were entirely convinced.

We still have a way to go, evidently. The concept that the arts are for all is alien to many, not least because some organisations appear to be keeping people out. There is still the divide between what is considered proper art and what is popular art and if you admit to liking the arts then you must be posh. Maybe it’s a problem of vocabulary. Perhaps we should ditch the terms ‘arts’ or even ‘sport’ and just use the generic word ‘enjoyment’. Because that’s what we’re selling, isn’t it? I think I might go to that football match after all.

TC - give yourself and Artrix a massive pat on the back for attracting your biggest ever audience to Walk the Plank. I think you nailed it when you said "many of those new to the venue had come via the engagement programme of a community lantern parade along with their children". Yes, it takes this kind of investment to hit a new audience and it worked. Don't worry about the others. They obviously need something else to draw them in. Your broad campaign may feel like it didn't work but it still communicated your message that Artrix is doing good art, even if the readers didn't come to the event. I don't think the analogy with football works though. Saying 'do you want a free ticket to an arts event' is like saying 'do you want a free ticket to a sports event' - big yes to tennis; big no to football for me. And everyone knows about football but only a few people - comparatively speaking - know about your specific arts event. I can see it's tempting to stick with a generic term like 'enjoyment' when 'the arts' seems off-putting, but marketing is all about specifics, not heading down a general path where there's nothing to choose (on the surface) between one pastime and another. Let's not be apologetic about the arts. Let's celebrate it. But let's not beat ourselves up if our meagre budgets and limited time/energy doesn't buy us the audience moon on a stick. Louisa (Secret Agent Marketing)
We shouldn't underestimate the personal investment that is required in order to fully engage with the arts. The knowledge and understanding that is necessary to interpret and understand some art forms (what sociologists call cultural capital) takes time, and some effort, to acquire. I wouldn't expect to understand the subtleties and complexity of a sports event without any prior investment in an understanding of the sport itself. Offside rule anyone? Football club transfer system? These things are as a much a mystery to me as abstract expressionism would be to many football fans. Engagement with the arts has to happen as part of a personal journey, a journey that involves an accumulation of cultural capital. This is not the same as being 'posh' (though social class is an inevitable corollary, for reasons that are too complex to go into here). However, cultural capital is an asset that greatly increases the possibly of our audiences engaging with arts events. The task is making this journey seem worthwhile for people who may have already invested heavily in their own area of interest, whether that be football, gardening, cooking or any other field that offers the payback of individual personal rewards.
As an agency that works across the arts and cultural sector to grow audiences we are well versed in the challenges highlighted by TC Peppercorn. The recent research The Audience Agency have done (with the outdoor arts sector in particular) has not only helped understand what we know and don't know - http://audiencefinder.org/audience/outdoor-arts-2014 - but has also leveraged significant additional funding for the OA sector to build on their work, so the impact can be sustained. There's some comfort in the fact that we are all in the same boat to a certain degree. In the US 'The Wallace Foundation' asked the RAND Corporation to review what was known about audience building. The study 'A New Framework for Building Participation in the Arts', based on visits and interviews with over 100 organisations, found that many efforts to expand audiences suffered from being "hit or miss". http://www.wallacefoundation.org/knowledge-center/audience-development-for-the-arts/strategies-for-expanding-audiences/Documents/The-Road-to-Results-Effective-Practices-for-Building-Arts-Audiences.pdf What we do know from our work with the sector is that there is no single, right way to engage audiences. Organisations play different roles in the “cultural eco-system”, and any audience engagement activity should reflect the scale, resources, personality and purpose of each organisation who will be trying to reach different audiences for different reasons and will therefore do so in different ways.

Placemaking to last
Enjoyment for all
Gatekeepers to the arts