With such a large number of volunteers working on the Manchester Day celebrations year after year, Liz Pugh gives some advice on how to build a team of loyal volunteers. 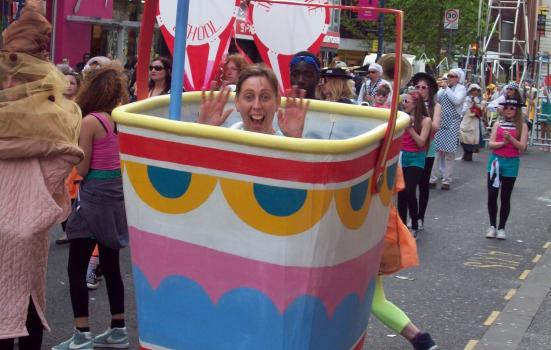 Manchester Day has grown from a community parade to a citywide celebration which draws in visitors from all over the region. Last year 60,000 people spent the day with their families and friends, taking part in activities or enjoying music in the squares and streets. For Walk the Plank we had 25 creative volunteers working alongside more than 30 artists to make floats, costumes and props in the lead-up, with another 60 volunteers on the day to push, carry, inflate, check in, register and support the professional team in so many ways.

Alison Mee has volunteered on every parade and said: “I get so much out of volunteering - a chance to meet people, both artists and other participants. On the day itself, it’s just such a buzz. It’s interesting observing some of the behind the scenes stuff that goes into organising an event of this scale. I’ve learnt practical skills, and now I help with the volunteer briefings, which is good experience for me. Being able to understand the bigger picture and how you are contributing is really helpful. I still remember the first year when I was shown the parade outline, laid out along the walls of the corridor, and I was blown away.”

Briefings and the right information are important. Alexis Johnson, our Learn It Director, ran workshops in Hull in advance of the Freedom Festival with the aim of building relationships. People came into the briefing sessions as strangers and were friends by the end of the festival. At briefings, the volunteers were given the chance to look at important information in advance, Alexis talked through the three-day festival programme in detail and gave volunteers the right maps and schedules so that they could work professionally. Leaving a volunteer without a clue because no one had time to brief them or give them a programme is the best way to guarantee they never return.

We ask people to tell us their motivations for volunteering when they sign up. We then try to make sure that any special skills or interests are taken into account in the allocation of jobs. Sarah Harris, our Volunteer Co-ordinator, contacted every potential volunteer on Hull Freedom Festival to ensure that their volunteering experience could be personalised. People who were shy of talking to the public were deployed to work behind the scenes, and those who wanted specific experience in stage management to help their employment prospects were given that, and a reference afterwards if they asked for one.

It is important to be clear about the offer – how much time and what the deal is – and to have a single point of contact who can liaise in advance. Saying thank you matters too, by email, but also in public. We invite volunteers to share the public platforms with sponsors or clients, so they are present at the shiny moments as well as expecting them to be present during the derig. We try to make sure volunteers get to do the fun stuff as well as doing the hard work and the repetitive jobs – driving the parade route in a giant bucket, as well as staying late sticking eyes on to the shoal of foam fish.

We also budget for expenses to cover travel, refreshments and T-shirts, and encourage partners to do the same. T-shirts are a useful way of giving volunteers an identity, and a way of being recognised by the public as well as by each other.

With Manchester City Council, we host a sponsors reception in the workshop in the week of the parade. The business people who have invested in the event really like meeting those who are making it happen – the army of volunteers who are gluing, sewing, wrapping and rigging alongside the artists. And the volunteers appreciate being invited to the reception alongside the professional team.

Volunteers return each year because they know that they are valued by us, as well as valuable to the success of events like Hull Freedom Festival or Manchester Day. They have knowledge that the professional team might not have, and notice things that we may not see. Volunteers are powerful advocates for the work, champions within their own communities, and many of them are making time in already busy lives to make a difference. Their dedication is a good reminder that doing something for the love of it can be hugely enjoyable.

Liz Pugh is Co-founder and Creative Producer of Walk the Plank.
www.walktheplank.co.uk