Steph Fuller argues that Creative People and Places projects will take time to take effect and therefore criticism of their impact is premature. 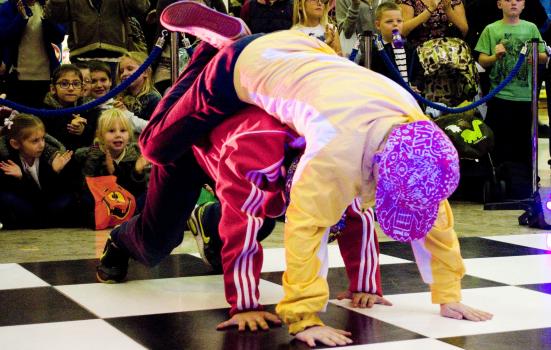 How to grow up in the Bronx by YAK Dance, a family arts event in 2014
Photo:

As director of Ideas Test, one of the 21 Creative, People & Places programmes (CPP) funded by Arts Council England (ACE), I was disappointed to read Frances Williams’ article Cohesion or conflict here in AP, which I felt was full of misconceptions and misunderstandings and had very little information about actual CPP activity. A brief reading of the information on the websites for both ACE and CPP demonstrates that the programme is both diverse and varied in its approach.

Consortia have all been formed by partnerships between arts and other sector partners – there is a huge range involved. The Ideas Test consortium comprises three third-sector organisations, including a health provider, and three arts organisations – a theatre, a visual arts festival and a café/gallery/studio. We work with a network of community catalysts, who are individuals nominated by local people as ‘doers’, who then receive free training and networking, opportunities to take part in our funding decision panels (paid) and small commissions to support their own project ideas. Our larger project programme was formulated at the end of a year, by which point we felt we had gathered enough data through both desk and primary research to identify where there were gaps in provision, what local people were interested in, and what might be productive strategic interventions.

Surely developing a new holistic way of working in places where the cultural offer is generated by local people, and then consumed and created by them, is worth aiming for?

We are one of the first round of CPP projects and were awarded funding in 2013. Based in Swale and Medway in the north of Kent, we have approached our work in a grassroots-up way, supporting local people from the arts sector and elsewhere to try out new ways of engaging people and developing projects. There is very little arts infrastructure where we are, so we are supporting the development of networks and small organisations to build the local offer. We are encouraging more people to engage with arts and culture in a holistic way, whether as consumers or creators, and that is why we are working with local people with what interests them as a starting point – investing in their ideas and creativity.

Our approach is not about regeneration, artist-led or otherwise. Although some projects (including ours) may be working in areas where regeneration is taking place, this is not the main focus for CPP. We expect our activity to have an impact to varying degrees on economic development, wellbeing, community resilience and more. Rather, it is taking place in the context of a substantially rural area, with no single urban centre, poor public transport, and as a result, social and economic isolation for many people. We are looking primarily to increase opportunities for people to take part in arts and creative activity in whatever way they choose. And in doing so, increase the number of people reporting regular arts attendance – currently defined as going to or participating in three or more arts activities a year. (The defining criteria for CPP is being in the bottom 20% of local authority areas for arts engagement as reported in the national Taking Part survey commissioned by DCMS, ACE, English Heritage and Sport England.) This behavioural change will take time to embed.

The Rebalancing our Cultural Capital research came well after the establishment of the CPP programme, and has perhaps made people think that CPP is being positioned by ACE as the answer to a redistribution of investment to the regions. This is not why it came about. Indeed, ironically some of the places with the lowest arts engagement are in London.

The Warwick Commission report strongly endorses CPP’s approach with its emphasis on the local, and valuing the whole arts ecology – amateur, professional, creators and consumers. I quote: “We should be encouraging communities to see themselves  as co-commissioners of their cultural and arts experiences, working with cultural partners locally and nationally.”

As action research programmes, the CPP projects are exploring what new models would look like, developing them in collaboration with local people, and sharing learning with the wider cultural sector. There won’t be a single answer, and not everything will work, but that is okay. If we only do what we already know how to do, we will just perpetuate the status quo. The long-term nature of what we are doing means we do not have any easy, quick answers. However, in Kent we are developing some new models involving micro-promoters who are enabling us to bring the arts to people in new ways. We are building capacity among arts practitioners, amateur and voluntary groups and others to develop and deliver their own cultural activity.

Many arts practitioners are enthused by this approach, including Magz Hall and Jim Blackhouse of Radio Arts who said this of the Lookout project: “The project gave us freedom to explore and create. It allowed us to push our creativity and challenge ourselves without fear of failure or judgement. This is the first time we’ve worked on a commission that felt as if it was designed for artists to truly develop their practice and also increase wellbeing of all partners. While we hope the resulting piece will be left as a legacy piece for LV21 and those who have helped to create the work along the way, we know that we gained a lot from this partnership and that happens very rarely.”

I don’t think there is any false optimism in CPP. We know that what we are trying to do is hard and will take a long time, but we’re up for that. We know that some of what we try out won’t work very well, or maybe at all, and we will acknowledge that and learn from it. Surely developing a new holistic way of working in places where the cultural offer is generated by local people, and then consumed and created by them, is worth aiming for? Working in a way that is foreign and new to many artists and arts practitioners won’t be for everyone. But it is also about saying that we all make culture between us in our lives, and if we can close the gap between the ‘capital A arts’ and the things people do in their everyday life, then that can only benefit everyone in the long term.