Trinity College of Music is experiencing a new lease of life since its relocation to the Christopher Wren site of the Old Royal Naval College in Greenwich, writes Emma Kendon.
Our new home is magnificent, a real pull for potential students, and the College has been able to improve its resources and to expand on its outreach work. 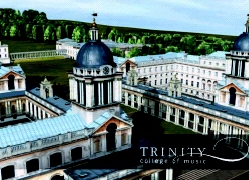 For three years, we have been reflecting the College?s distinctive quality, that of friendliness and innovation combined, through high-quality print and design. However, we wanted to show prospective students inside the Old Royal Naval College, tell a bit of its history ? which dates back to the palace of Henry VIII - and illustrate the variety of activity. Putting a CD on the front cover of our prospectus seemed logical, not only because no conservatoire in the UK had yet done so and Trinity has a tradition of 'firsts', but also because as a music college we want to give people a taste of the quality of performance our students achieve.

We have created an enhanced CD, which can be played in a standard audio CD player as well as on a PC or Mac. I insisted on this because many of the students? advisers, who may be very advanced music teachers, are not necessarily comfortable with computers. What a disaster if they were to see a CD on the prospectus, put it in their machine and it didn?t play them some music! For those using computers, in next to no time the CDRom brings you over the Thames from the north side and whisks off bird-like around the site, over Wren?s magnificent architecture, up over the Royal Park to the Observatory and back through the colonnades of the Old Royal Naval College. In total there are eight tours in eight different languages. You can enter the main recital space to hear and see a performance of Purcell; go into the dance studio to see dancers accompanied by the music of our composers; observe a one-to-one flute lesson; travel through the recording cables and into the Control Room; and see Saturday Junior Trinity classes and rehearsals. You can look inside the Painted Hall and neo-Classical chapel; fly over the water to Canary Wharf; and go into local schools on boats and out to collaborative performances and ceremonies, all accompanied by Trinity?s students? music.

I was fortunate in the crucial early stages of the CD-Rom?s production. After a seven-hour story-boarding session, the rest was a matter of organising rooms, people, sound-clips, music licences and then a lot of proofing. The team came and photographed; insurance companies lent us detailed graphics of the Painted Hall and Chapel, already in digital format; the graphic wizard produced incredible photo-realistic 3D animation; and we provided the music ? pieces already chosen and mastered for an earlier fundraising campaign CD ? and fitted it to the tours. We formatted for Mac, designed the prospectus cover so that the two complemented each other and our printer organised for the CDs to be attached to our brochure.

I took a late proof on a first outing at the South Bank in April, where Trinity's Symphony Orchestra were playing for a Stilgoe Saturday Concert for children. Parents and teachers were instantly captivated. The time it took for people with no more than a passing acquaintance with Trinity to take charge of the computer mouse and explore all the facets of the College was on average about 45 seconds. A small amount of text helped them interpret what they were watching, but they took away with them about the same amount of information as if we had held a full open day.