A new wave of artists’ tours encourages us to look differently at the public spaces (like car parks) we see around us. Bill Aitchison explores these new tours. 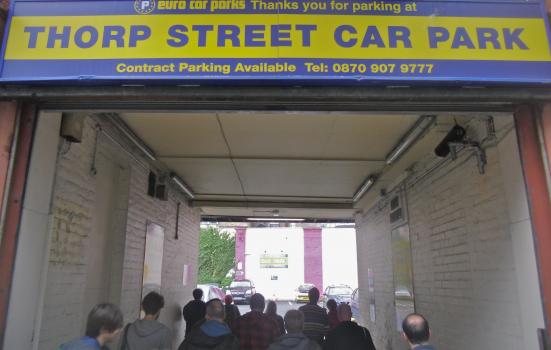 A quiet revolution is taking place in outdoor arts. The fire-eating stilt walkers and giant robotic creatures will still be making their way through our city centres for some time to come, but they are being increasingly accompanied by another quieter form of outdoor arts: the guided tour. These are nothing new in themselves as they have been a staple of the tourism industry for a great many years. What is new is the interest that is being shown in this form by artists coming from the likes of site-specific theatre and socially engaged art who have re-imagined the form like never before. What then is this work exactly and what is driving its growing momentum?

Firstly, this sort of work can often be described as site-sensitive, that is to say it does not attempt to significantly alter or close off the public space but rather to use it in a way that makes it more public than ever. At a time when public space in the UK is being continuously undermined to the point that it is often regarded as merely the space passed through on the way to and from work or the shops, this quality of inhabiting and valuing public space as an essential site for cultural and political exchange, or quite simply, as an essential part of a cohesive society, is a defining feature.

Secondly, this sort of work does not necessarily take place in beautiful locations. I have been taken around car parks, through subways, into a McDonalds and around a flea market before, all in the name of art. This work claims spaces that are often ignored and gives them new meaning. Another feature is that this work stresses the live presence of a guide. There have been a number of well-known artistic audio tours such as Janet Cardiff’s ‘The Missing Voice’ or Graeme Miller’s ‘Linked’, but this current wave of tours play specifically with the live presence of the guide. Finally, this work is small in scale, eschewing the grand spectacle and instead connecting with people on a personal level.

Much of the impetus for this work comes from the artists themselves who often juggle the roles of writers, guides and producers. An example of this is the ‘Still Walking’ festival in Birmingham. It is a young and expanding festival that puts on an eclectic programme of guided tours that extend both the types of places a tour goes to and the sort of narrative that strings it together. At the same time it encourages experimentation with what the format of a tour can be. A novel feature of Still Walking is that it mentors local people who have never given tours before, helping them to produce their own personal form of tour. This results in unusual tours that reflect people’s personal interests and geographies, a sort of citizen’s sharing of their different takes upon the city, rather than the more conventional blue badge tour of the city’s great and good.

Another example of an artist-curated programme is that of Arttours, based in Stuttgart in Germany. As well as making their own work, the producers arrange walks and outdoor art events year round, which provide the city’s residents with a way of getting to know the city through regular creative encounters. It was through them that I first developed the project of mine ‘The Tour of All Tours’, a guided tour of guided tours that took the audience on a walking tour of the city centre. It was researched and created on location and it straddled art and tourism very directly, being both an art project that critically, and somewhat ironically, evaluated Stuttgart’s tourism industry and at the same time offered a genuine, albeit unusual, tourist experience in its own right.

The work of the Croatian company Shadow Casters is significant here too and the recent performance ‘Father Courage’ directed by Boris Bakal for Dubrovnik Summer Festival is an example of how this sort of work can be created on a larger scale and integrated with theatre. Some 14 performers, spread over five locations and using the narrow pedestrian streets and steps that connect them, gave a networked performance in which five groups of spectators were simultaneously led around and brought into a number of situations. Each of these groups was of up to 40 in number so this was a show that reached a significant public, was able to expand in moments and properly use theatrical devices yet retained an intimate feel.

When we think of outdoor arts in the UK there is a tendency to picture it as a family-friendly spectacle. I would argue that while that represents a great deal of what is on offer there is more out there and this upsurge in artist’s tours is just such an example. What’s more, if we are serious about protecting public space we should be careful that the way we use it for arts events does not in fact contribute to the problem of access. It is entirely fitting that sometimes our streets and parks are used and truly occupied by celebratory events that allow us to experience our cities in different ways, but this must be the exception and not the norm. Subtler forms of intervention that change our perception of what is there day in and day out have great value too as they can help us better appreciate the poetic qualities latent in our streets. This is coming to be recognised more widely and is, I believe, one of the reasons behind the current rise in smaller-scale artist tours and events.

My advice then is, if you have not recently taken such a tour to do so − you might be surprised at what you find. Tours are quite definitely not only for tourists.