Crowdsourcing for Dummies reveals new ways of involving the public in the arts, says Nicole McNeilly. 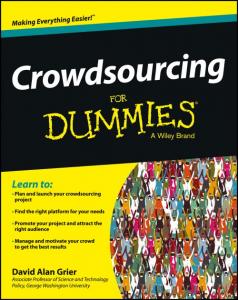 Crowdsourcing has never been more topical for the arts sector – although you might not have heard of it yet. It’s an umbrella concept that expands ‘what anyone or any group can do’ by using the ‘crowd’ (freelance/flexible workers and fans) to complete work for you, offering a trinity of ‘innovation, flexibility and resourcefulness’. We’ve all heard of crowdfunding (or fanfunding), which is now a crucial income stream for many artists. This is the most known of the five methods of crowdsourcing that are discussed in this guide to implementing a crowdsourced programme of work.

Crowdfunding’s prominence shouldn’t overwhelm the subtleties of other forms of crowdsourcing. The most common form of crowdfunding is usually a donation based model and doesn’t take place on the ‘crowdmarket’ or require the division of work which are key aspects of the other four crowdsourcing models. Labour can be divided and completed in big chunks through macrotasking; microtasking suits smaller tasks. Crowdcontests are similar to putting out a tender; the work is given to the best design or idea. Self-organised crowdsourcing is a contest where the crowd decide the best way to divide and complete work. In most cases, work and ideas are exchanged for a reward (often monetary, but not always) after being displayed on the ‘crowdplatform’ - websites like Amazon mechanical turk where crowdworkers bid for tasks.

But who is the crowd? It’s not (just) the audience; and so, initially, it was difficult to frame this book’s theories within the context of the arts sector. Whereas crowdsourcing could be easily implemented in areas such as translation and transcription, it’s not a model that translates easily for everyone. In the arts there is no pre-mobilised body of freelance workers, although I’m sure the demand is there. To offer work would depend on willingness from arts organisations to open up to experimentation and innovation in work practice. Instead of the separation of the crowdsourcer (e.g. an arts organisation) and crowdworker ( e.g. audience), it’s the antagonism between the two where the potential value of crowdsourcing lies. We can develop and utilise a crowd that has a huge wealth of experience, creativity and skill and in the process reduce any perceived distance between the public and cultural institutions. Our arts organisations might open up to the potential benefit of letting the crowd in and instead of only consuming the work, they could inform and create it too.

The arts sector craves innovation but struggles with risk, and this won’t be solved through crowdsourcing. Grier suggests that for most it’s a rework rather than a revolution, and he outlines potential pitfalls and challenges, including reliability and the time needed to implement the method successfully over other more tried and tested ways of getting work done. To harness the crowd, we need to create a platform for work and assess what the crowd could do, whilst ensuring that any transaction is of value, avoiding both the exploitation of workers and low quality work. Crowdsourcing might also seem a tad jargon heavy (and over-conceptualised) for work practices that have been around in various sectors in some capacity for years. Yet its real value lies in challenging current thinking and practice about work, innovation and expertise. If you wanted to open up thinking about work and audiences, this is a great place to start.

Bookshop: Pop Up Business for Dummies