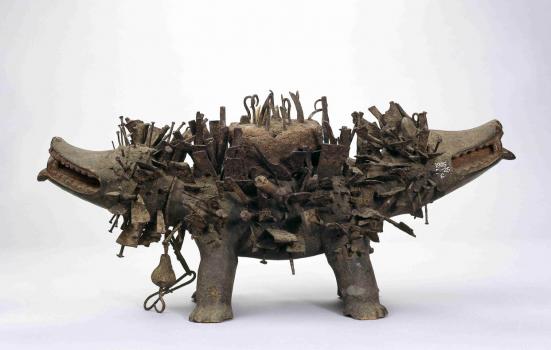 Kozo the dog at the British Museum

Each museum, gallery and heritage site has a unique story to tell, and it is an audio describer’s job to draw out that story and interpret it for blind and partially sighted visitors in a way that stimulates their understanding, enjoyment and desire to explore further. This may mean helping the venue to choose the objects to be highlighted on an audio-described or handling tour, training gallery staff in audio-descriptive techniques to provide an interactive tour, or providing a recorded audio-described guide for independent exploration.

Part of our role is to help clients to appreciate the difference between an audio guide and an audio-described guide. An audio guide is likely to include the location of the object and contextual and curatorial information. In addition to these, an audio-described guide includes a description of the exhibition space, information about how the exhibit is displayed, its size and the materials the artist used. This is followed by a vivid, verbal description of the exhibit, including information such as shapes, colours, composition and condition.

Standing in front of an exhibit, using your remaining sight to explore it and listening to the buzz from other visitors, have been cited as reasons why people come to a gallery

One of the highlights of the British Museum is Kozo, the double-headed dog. The curatorial information on the website is interesting and engaging, but without any visual description of Kozo, a blind or partially sighted visitor is left without any real idea of what the little dog looks like. So the museum has included an audio description of Kozo on its website, written and voiced by Louise Fryer, a VocalEyes describer. This is what she says:

"This little dog is called Kozo. He has a head at each end of his body so he faces in two directions at once. He is about the size of a small terrier, standing 28 centimetres high. From one snout to the other he measures 64 centimetres. He is carved from wood and the effect of bristling fur is made by lots of rusty nails and shards of metal that are hammered part-way into his body. Kozo stands on two sets of front legs, one pair facing to the right and one pair facing left. His two heads are identical, each a mirror image of the other. Both snouts are raised, each set of jaws gaping a little to reveal sharp teeth and a lolling tongue. His eyes are almond-shaped and carved into the wood. On the centre of his back Kozo carries a pack of medicines made from vegetable and mineral materials, bound with clay and patted into a circular shape."

The curatorial information is then integrated with this description to give context and complete the picture. The quality of audio description is something over which there has been little debate. Many museums and galleries feel ill-equipped to make a judgement. This makes it doubly important to use a writer who is skilled in writing audio description, and can make the editorial judgement about which information to include.

Including an overview of the gallery and orientation instructions allows a blind or partially sighted visitor to locate the described object. Standing in front of an exhibit, using your remaining sight to explore it and listening to the buzz from other visitors, have been cited as reasons why people come to a gallery rather than listen to a podcast at home. Contrast this with a comment from a visitor to a major London exhibition: “I knew that some of the objects had been described but there was no way of knowing where they were. I played the game, sat on a bench and listened to the descriptions on my hand-held guide, but it was only half an experience without being in front of them.”

After a recent audio described tour, one visitor commented: "It really is so unusual to come away from a building feeling that you really know the building and can tell others about it."